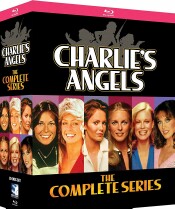 We now turn our attention to Mill Creek and a couple of iconic releases coming your way just in time for Christmas:

Just in time for the box office bomb that starred Kristen Stewart, Mill Creek reminds you why there have been so many attempts to reboot or remake Charlie’s Angels. Unfortunately, each try fails to consider the ingredients that made the show itself the kind of hit that it was. One of those ingredients happened to be the culture of the 1970’s, which was very different from the world we live in today. In the 70’s a show like Charlie’s Angels could thrive because people didn’t want much more from their televisions than to be entertained. With the #metoo movement, one has to be very careful about how women are depicted in entertainment. It would be so easy to write the show off as exploitation, and the 70’s was absolutely the era of sexploitation films. But I found the show went beyond the “babes in action” cover that most of us remember so well. It might not help us to understand today that Farrah Fawcett poster became the best selling poster ever at the time. It was too easy to just believe we adolescent guys were just watching for the babes. Looking back, there was a bit more to it all.

The other ingredients missing are the actors themselves. There was just something iconic about the original trio of Fawcett, Kate Jackson, and Jaclyn Smith. There was more than sex appeal going on. Along with David Doyle as Bosley, there was a real chemistry there that hasn’t been repeated in the franchise since. Eventually the trio changed, and with it dropped the ratings of the show. Cheryl Ladd eventually replaced Fawcett. Later Shelly Hack replaced Jackson, and Tanya Roberts soon replaced Hack. With each new replacement the show fell lower in the ratings until after five years and 110 episodes, it all went away.

If you want to see where it all began and watch a franchise at its best, this complete series release is exactly what you want under your tree. As you watch the show over its five years, you’ll be amazed at the way it changed year to year. In retrospect, I didn’t remember so many changes. But the formula was a specific one, and no one has been able to match it in over 40 years, and I don’t believe they ever will. It’s so nice to see this old classic series on Blu-ray in high definition for the very first time. Mill Creek has been quite good at getting out some golden classics from the 1970’s and putting them on Blu-ray.

The King Of Queens

I’m no longer a big sitcom watcher. I love Modern Family, and Big Bang Theory and its spin-off Young Sheldon offer a few laughs. The last great sitcom for me was The King of Queens. It was the last comedy that we scheduled ourselves to watch. Often my wife and I would watch it in bed before the end of the night, but there hasn’t been a show like it since. Production values continue to improve, but I find myself watching things today, and for 30 minutes I don’t even crack a smile. I’m not a big fan of innuendo. Funny has to be found within the characters and their interactions. That’s what makes Modern Family funny. It’s why Seinfeld enjoyed so many laughs. You don’t really see it often anymore.

Kevin James is incredible as Doug, a driver for a fictional version of UPS. His best friend is Deacon Palmer, a fellow driver, played by Victor Williams. His wife Carrie was played by the queen of sarcasm, Leah Remini. Their chemistry was so good that Kevin’s more recent series had the leading lady cut out so that they could bring in Remini. The best character of all was Carrie’s father, played by Jerry Stiller. He hit a second homer after playing George’s father on Seinfeld and now played Doug’s foil here. The greatness of the character was his incessant faulty logic. You couldn’t win an argument because he was playing by a set of rules as alien as E.T. He was the kind of guy who was Froot Loops-crazy but thought he was a genius. The chemistry between him and Kevin James was priceless. The Hulk’s Lou Ferrigno ended up playing himself, who moved next door. The show didn’t need innuendo or gimmicks to last nine seasons and over 200 episodes. This was as close to a blue-collar-working-man sitcom as you are ever going to find. Often it created a perfect comedy hour airing with Everybody Loves Raymond. The characters of Doug and Ray often crossed over, creating a shared universe that was the last gasp of comedy for decades.

Unfortunately, you won’t get Everybody Loves Raymond here, but you will get 207 episodes on 22 discs. It slides nicely under any size tree.

Gino Sassani is a member of the Southeastern Film Critic's Association (SEFCA). He is a film and television critic based in Tampa, Florida. He's also the Senior Editor here at Upcomingdiscs. Gino started reviewing films in the early 1990's as a segment of his local television show Focus. He's an award-winning recording artist for Omega Records. Gino is currently working on his 8th album Merchants & Mercenaries. Gino took over Upcomingdiscs Dec 1, 2008. He works out of a home theater he calls The Reel World. Favorite films: The Godfather, The Godfather Part II, The Body Snatcher (Val Lewton film with Karloff and Lugosi, not the pod people film), Unforgiven, Gladiator, The Lion King, Jaws, Son Of Frankenstein, The Good, The Bad And The Ugly, and Monsters, Inc.
Downton Abbey (2019) (Blu-ray) Holiday Gift Gide Spotlight: Collectorz Movie Database