Posted in: Disc Reviews by Gino Sassani on December 20th, 2019 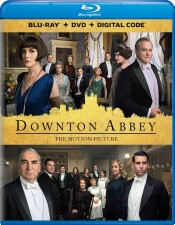 Downton Abbey spent six years on television and has amassed 52 episodes. In that relatively short run the series has also managed to collect over 200 award nominations and several Golden Globes along with other prestigious awards. Let’s not forget a rather loyal fan-base that has watched each episode with anticipation of the next sharp barb or character revelation. The fans have been vocal and strong enough that a new film franchise has been anticipated to fill the void left by the series. In one of its years it was the number-one binged series in the world. That’s a lot of power, and it’s little wonder that all of these ingredients are expected to create a little box office gold. But film franchises from television shows rarely go on to such golden heights. There are some notable exceptions, to be sure. But even here, expectations and changing caretakers often lead to both high points and flops. The Star Trek franchise is a perfect example of those kinds of ups and downs. Mission Impossible is an example of shows that have to be completely retooled to hit the high numbers. Where will Downton Abbey fit in this equation? I rather suspect the jury is still out. One thing I can tell you with complete confidence: the film will absolutely entertain fans of the series. There’s no retooling to be found here, and you can expect the same kind of drama that you’ve been mainlining for 52 episodes.

The original series left the Crawley family at the Christmas of 1925. A little over two years have passed, and we rejoin the family in the summer of 1927. The family appears to have come to a point where they have to face the possibility that the aristocracy in Great Britain might be finally coming to an end. There is much conversation about having the family finally give up Downton Abbey and place themselves into somewhat normal British society. The manor doesn’t bring in the kind of wealth it once did, and keeping it going will require making some serious cuts and sacrifices. Amid this crises of conundrum, Robert Crawley (Bonneville) is informed that the King and Queen of England have decided to visit the Abbey and spend an evening there. The occasion brings about a flurry of preparations. One of these preparations involves the newly promoted butler. Thomas Barrow might not have the right experience or demeanor to handle such a huge job. Lady Mary (Dockery) decides to reach out to their seasoned but retired former butler, Mr. Carson (Carter). It’s actually a quite clever way of giving the show some kind of major story and a great excuse to bring back the familiar character so that fans can get at least one more visit with things very much as they were at Downton Abbey.

The show has always relied on a balance of time spent both with the wealthy master family and the group of servants who keep the day-to-day things running smoothly. It’s a formula fans of the 1970’s British television series Upstairs Downstairs know too well. Here the family isn’t merely wealthy. They are aristocracy, and it’s not just a big mansion, but grounds akin to castles and royal residences. The film allows us to see the impact of the visit from both sides, and it’s that careful balancing act that really keeps the pace moving and makes the two hours go by quite swiftly. While there’s high drama “upstairs”, I found the most compelling story was found with the servants. When they discover that the traveling royal staff will pretty much take their jobs for the duration of the visit, they conspire to eliminate the competition in some quite amusing circumstances. The plot becomes a wonderful victory for the staff and an entertaining, if at times awkward, visit by the royals.

Of course, all of the fun won’t be found with the servants. Maggie Smith plays the family matriarch, Violet. She completely steals any scene in which she finds herself, and the amazing thing is how effortlessly she accomplishes the feat. As with the series, Violet is the real queen here. She’s the queen of the biting wit. She can take down the most assured opponent with barely a handful of words. I’m not sure she ever speaks more than a handful of lines at a time throughout the movie, but she makes the most out of every syllable. I get the impression that she’s what the audience really came to see … or rather hear. Her most challenging fencing opponent happens to be her cousin, Maud Bagshaw (Staunton). When she discovers that Maud intends to leave her fortune to her maid (Middleton), the sparks really fly. An investigation into the reason is one of the many side-stories that are constantly going throughout the course of the film.

This is where the film loses a lot of its luster. There are so many side stories that they only take away from the main plots going on, and I think it all suffers considerably because of it. I understand the reason. Director Michael Engler has as much as admitted that he was playing to over 40 main characters on the film. He felt it was important to give each of them a little something to do. This resulted in plots that involved an assassination attempt on the King, among others, that would have been fine plot points but aren’t really given enough time to truly develop. I found myself getting more than a little confused at these major stories relegated to such small by-the-ways. It’s a tough problem to deal with so many characters, but tough choices needed to be made. Engler was hoping to appeal to every single fan who might have had their favorite little character, and he worried that they might have felt cheated if their favorite wasn’t given something quite important to do. I think he would have been better off trusting that the fans would enjoy the entire experience and save some of these stories for the next inevitable installments.

Downton Abbey is presented in its original aspect ratio of 2.39:1. The 1080p image is arrived at with an AVC MPEG-4 codec at an average 40 mbps. This high definition image presentation does a pretty fine job of taking advantage of the wonderful period production design. There is a lot of detail to be enjoyed. I found the kitchen scenes to be incredibly rich in texture and detail. The color palette is rather warm, particularly in exterior scenes which are a bit heavy on the yellow. But still the finery of the dress uniforms particularly stand out with the little bit of vibrant color to be found here. The same for some of the dresses, most notably a rich blue dress worn by Mary. The opening shots of a moving train display a wonderful billow of steam against a rather stark sky. Then there is the first establishment shot of the Abbey itself. It’s a welcoming shot that I’m sure fans of the show will find quite moving. Black levels are good, and there is a fair amount of shadow definition.

The DTS-HD Master Audio 7.1 is quite immersive. The music is best served by the wide surrounds. The familiar theme wraps itself around you quite pleasantly. Elements like rain and crowds do a nice job of filling that sound field. Dialog cuts through as sharp as the wit of Maggie Smith’s character. I noticed an unusual attention to the details of space. In the final ballroom scene the camera passes the orchestra, and the individual instrument volume would rise and diminish in the mix as the camera passed. It was a wonderful effect.

Deleted Scenes: (5:52) There are eight without a play-all option.

Cast Conversations: These are split between the “upstairs” (7:25) and “downstairs” (9:29). The cast members sit and talk in an informal setting to share their thoughts and memories.

The Royal VisitL (3:15) This brief feature serves up the basic setup for the story.

True To The Twenties: (2:15) This feature looks at the efforts to be authentic to the period.

Welcome To Downtown Abbey: (2:47) Pretty much a promo for the film.

The Brilliance Of Julian Fellowes: (2:14) A profile of the creator.

Series Recap: (10:09) Jim Carter and Phyllis Logan offer a summary of the six seasons so you can follow the film without having seen the series.

One thing you just can’t quibble with is the film’s production values. A film budget allowed for some grand establishment shots that really brought the audience into the experience. The first wide shot of the manor with the familiar strains of the theme song literally brought tears to the eyes of some of my fellow critics. Enough can’t be said about the music. I absolutely loved the score. For many of them, this was something like a religious experience, and there can be no question Engler gave his audience quite a bit of what they wanted. He was worried about the fans, and who can really blame him? But Engler should have understood better than anyone else that “Downton Abbey is the heart of this community.”

Gino Sassani is a member of the Southeastern Film Critic's Association (SEFCA). He is a film and television critic based in Tampa, Florida. He's also the Senior Editor here at Upcomingdiscs. Gino started reviewing films in the early 1990's as a segment of his local television show Focus. He's an award-winning recording artist for Omega Records. Gino is currently working on his 8th album Merchants & Mercenaries. Gino took over Upcomingdiscs Dec 1, 2008. He works out of a home theater he calls The Reel World. Favorite films: The Godfather, The Godfather Part II, The Body Snatcher (Val Lewton film with Karloff and Lugosi, not the pod people film), Unforgiven, Gladiator, The Lion King, Jaws, Son Of Frankenstein, The Good, The Bad And The Ugly, and Monsters, Inc.
Exclusive Interview With Kevin Sorbo For Lionsgate’s Bernie The Dolphin 2 Holiday Gift Guide Spotlight: Mill Creek