City on a Hill: Season One

Posted in: No Huddle by Jeremy Butler on December 21st, 2019 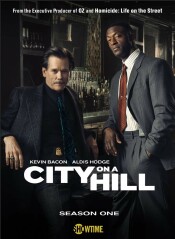 They don’t trust one another, but they need one another. One is idealistic and believes in the letter of the law, as well as the principle of there being no shortcuts to justice. The other is disillusioned, immoral, and corrupt, albeit effective and well-connected. Aldis Hodge, who has been having a good run since the end of Leverage back in 2012, and the well-established Kevin Bacon have great chemistry in City on a Hill. Their chemistry is the best thing to come out of the series that can at times become convoluted with all the subplots occurring in every episode. Loosely based on the events of the “Boston Miracle,” (also known as Operation Ceasefire), a police initiative implemented back in 1996 aimed at youth gun violence as a large scale problem, these two join forces to catch a group of armored truck robbers who are not afraid to kill to get what they want. Rounding out the cast are Jonathan Tucker, Mark O’Brien, Jill Hennessy, Sarah Shani, and many more. The show tends to meander and get bogged down with the additional storylines involving the supporting cast, but each episode provides a great interaction between Hodge and Bacon that makes the meandering worth enduring.

Hodge plays idealistic Assistant District Attorney Decourcy Ward. He is a straight-laced individual with aspirations of ascending beyond the District Attorney’s office; however, his unwillingness to compromise his morals does not earn him any friends and has on one than one occasion cost him. Speaking of not earning friends, this is where Ward is introduced to Jackie Rohr, a corrupt but connected FBI agent. When Ward won’t go easy on Rohr’s confidential informant, these two are put at odds, causing Rohr to get creative in order to get what he wants, embarrassing Ward in the process. Meanwhile a group of robbers attempt to heist an armored vehicle. The job doesn’t go as planned, and one of robbers’ faces is exposed to the guards. Concerned about being caught, the group is forced to kill the guards to avoid witnesses.

This is exactly the type of crime Ward needs to solve in order to fulfill his future political goals. However, his status as a pariah even in his own office leaves him with few people willing to trust him or even work with him, forcing him to recruit the one person he can never fully trust. As the season progresses, the two form a shaky alliance that sees both men’s convictions tested. For Ward, it is about just how far is he willing to go or what is he willing to compromise to see justice done. Rohr is both the angel and devil on his shoulder, pulling the ADA into the dark, while also lecturing him regarding the importance of morality. With a taskforce hot on his trail, the leader of the robbers (Jonathan Tucker) is compelled to commit another heist due to the low score of the last job. His crew is reluctant to participate given results of the last job, forcing him to recruit his unstable and unreliable brother (Mark O’Brien) to pull it off.

There a few key things that make this series work, and make the series worth watching despite all the unrelated stuff that is also introduced. I mentioned the chemistry between Hodge and Bacon already, but to go into more detail, their shaky alliance is by far the best thing to come out of the show. It is such a mix match and so unlikely that seeing them together is pure gold. When first introduced, it is clear that these two will hate each other’s guts no matter what. Hodge’s character is ambitious, but not only that, he is under immense pressure to succeed. The flaw of this is that the pressure is from himself. He was offered a lucrative job with a corporate law firm, like his wife, but is choosing to stay and work his way up the ranks of the District Attorney’s office despite not being trusted by many of his colleagues, especially during a time where he is not fully accepted because of the color of his skin. In regards to Jackie Rohr, there are few characters on television who are as deplorable as he. He is a corrupt FBI agent, he is a bit of a racist (he refers to Ward as a affirmative action hire on more than one occasion), he cheats on his wife and gets his side chick pregnant, and he is not above intimidating his mother-in-law (who is also not of high moral character) when she threatens to expose his infidelity. Needless to say, Rohr is not a role model, and yet here he is mentoring Ward in a fashion. He speaks to him about his own idealism on more than one occasion.

On the other side of the coin is Jonathan Tucker, who despite his actions is not a completely repugnant character; he has some redeeming qualities. He is a family man, a good one. He loves his wife and he is loyal to his family, including his bipolar and untrustworthy brother. These redeeming qualities are also his fatally flaw, as it turns out. Tucker is an actor that has been on my radar for many years, and I am never disappointed to see him. He has a soulfulness to him, as well as the ability to fit into any environment you put him in. This isn’t his first foray as a criminal, and he brings that experience to this role. From the first episode it is clear what will be his undoing, and though it is deserved, it was still disappointing to see.

Jill Hennessy as Rohr’s wife’s storyline pulled focus away from the more important storylines in my opinion. It was empowering to see her stand up to her deadbeat of a husband and her mother, who was of the same questionable moral character, but these things could have been accomplished in half the time, I feel. It pulled focus, and the focus should have been on the crime and the investigation.

The events of the season finale have a very similar feel of the first episode ending, setting up the season, which has already been confirmed to be coming. I look forward to see where the story will go to next, how shaky the partnership between Ward and Rohr is following the events of the season finale, and hope that the series can find the right balance between the main plot and subplots. City on a Hill fits right into the landscape of other Showtime shows and is definitely worth a watch based on the portrayals of Kevin Bacon and Aldis Hodge alone.

Jeremy Butler is a film school graduate of the International Academy of Design and Technology. He is been writing for Upcomingdiscs since 2012; however, movies have played a big part of his life for much longer. Favorite genres include horror, science fiction/fantasy, and comedy. Favorite movies are V for Vendetta, Boondocks Saints, Kiss Kiss Bang Bang, and The Godfather.
Holiday Gift Guide Spotlight: CBS Television Ad Astra (UHD Blu-ray) (4K)