Star Wars: The Rise Of Skywalker

Posted in: The Reel World by Gino Sassani on December 21st, 2019 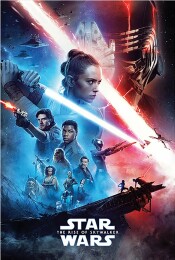 It was 1978 when it all began. That’s when George Lucas and a fairly unknown band of filmmakers and actors introduced us to that galaxy far, far away. We met characters like Han Solo and Princess Leia. We fell in love with droids named R2D2 and C3PO. We booed and hissed at the classic villainy of Darth Vader. And the hero of it all was a young farmer boy who pined for adventure on a backwater planet where nothing exciting ever happened. That’s where we met Luke Skywalker, and for three films ending in 1983, we were treated to an epic adventure. This unknown band would become cultural icons, but it was all over after five years of space swashbuckling and good old good versus evil. At some point Lucas made it known that the first Star Wars film was actually the fourth film in a trilogy of trilogies. Star Wars would gain the tag A New Hope, followed by The Empire Strikes Back and Return Of The Jedi. Of course, while Lucas teased there was a prequel trilogy and a sequel trilogy, we were told not to get our hopes too high. But in the 1990’s Lucas felt ambitious, and he delivered on that prequel trilogy with underwhelming result. Surely the rest of the story would remain untold.

Enter The Walt Disney Studios, who had already racked up some success picking up the Marvel franchise. They were looking for something else to sink another $4 billion in. With half in cash and half in Disney stock, Lucas relinquished control of his beloved Lucasfilm and all of the properties it contained, from Industrial Light & Magic to Indiana Jones. But the cornerstone of the film franchises was certainly Star Wars. From that point there was to be no mistake: the final three stories would be told. The Force Awakens directed by JJ Abrams really did give fans a new hope. The film was a wonderful companion to the first three, and we could finally forget about those meddlesome 90’s films. Abrams returned the franchise to the organic delights of actual film and teased the decision in the film’s first teaser/trailer. I literally cheered when I saw him demonstrate actual film being threaded into a camera. This was the true return of Star Wars. That film was followed by a remarkable spin-off story called Rogue One that told that story from A New Hope of those brave people who lost their lives delivering the plans to that nasty Death Star to the Resistance. It was another wonderful film, and the sky appeared to be the limit.

Then came Solo: A Star Wars Story and Episode VIII The Last Jedi directed by Rian Johnson. Those two films took a lot of the wind out of the sails of millions of fans across the world. Even Mark Hamill would complain about how much he disagreed with the final place he found Luke Skywalker. A film that should have finally brought everyone together for an adventure sadly kept the important parts apart and eventually walked all over expectations. So Abrams was brought back to bring the Skywalker story to a conclusion. The results are somewhat mixed, in my opinion, but there is certainly a somewhat satisfying conclusion that I think we all can live with. That’s what we get in Star Wars: The Rise Of Skywalker.

As the film begins, both the New Order and the old Resistance are exploring rumors that the long-thought-dead Emperor Palpatine (McDiarmid) is building a huge fleet of planet-killing ships and is about to conquer the galaxy in one fell swoop. Kylo Ren (Driver) has been drawn to his secret lair and offered the position of leader of this Last Order. He’s ordered to find and destroy Rey (Ridley), but the truth is he has grand plans for her as well. It mirrors the kind of hope he had for Luke back in the beginning. She is also trying to track down this secret haunt and brings along a few friends for the ride. C3PO (Daniels), Poe (Isaac), Finn (Boyega), and even our old friend Lando (Williams) all have their part to play. Princess, now General, Leia returns as a guiding force, but with the untimely death of Carrie Fisher, her performance is limited to outtakes from earlier shoots. It actually fits together better than I thought it would, and it’s not like all of us watching aren’t painfully aware of this cast member’s fate. There are a lot of characters to serve here and a lot of tributaries for the flow of the tale to take us on. Often studios like to draw out the last film in a series into two parts. That’s usually a mistake and leads to bloated storytelling. This is the opposite. This could have easily been two films. The result is a plot that you kind of have to roll your eyes and accept at times. We have no idea how this fleet got there or was built so large. Palpatine’s presence is also not really explained. If you can roll with those obvious flaws, you’ll appreciate the manic pace of the story that never quite lets up until the last few minutes.

I’ve seem the complaint that the film caters to the fans. Well… no kidding, Sherlock. That’s exactly who the film was made for and exactly who it should have been made for. You will experience so many classic Star Wars elements here. There’s a new addition to the “cute” droid family who gets a few comedic moments. There are a couple of cameos that I won’t give away here but are moving moments, to be sure. There’s the Star Wars requisite familial revelation that I have to admit I’m not at all happy with. John Williams continues to add to his suite with new dynamic music and plenty of moments where those old themes tug at the emotions more than a little. And, of course, there are the epic space battles, the wonderful collection of exotic creatures, and the story of redemption that was so much a part of the first trilogy. It’s all there, and while some will cite these elements as a bone of contention, I accept them as pure Star Wars. Absolutely cater to the fans. It’s what Abrams understands and Johnson never did. So, yeah. If you’re a fan, you will love it. If you’re not, not so much. All is as it should be.

Give Abrams credit for some amazing set pieces here. The raging ocean where Rey and Kylo Ren have the climactic battle is one of the coolest environments in any Star Wars film to date. It’s an epic combination of sets and f/x and was the image that stayed with me long after I left the theatre. Abrams does what even Lucas himself couldn’t do. Lucas loaded his 90’s films with scenes so busy you couldn’t possibly take it all in. There was too much of look what I can do. Abrams delivers grandeur in a way that immerses us in this universe.

Again, there are plenty of flaws. It just wasn’t possible to tie up everything for everyone. Plot holes I could drive a Death Star through, to be sure. But it never fails to be entertaining, and it sweeps you up into this world for one last look at the story. It’s the end of this tale. Star Wars will continue in one way or another for decades. Disney is smart to let the film franchise rest while delivering wonderful material in their series The Mandalorian. I haven’t seen that yet but am hopeful it will appear in my review future. So strap yourself in tight for one last look at “a galaxy far, far away”.

Gino Sassani is a member of the Southeastern Film Critic's Association (SEFCA). He is a film and television critic based in Tampa, Florida. He's also the Senior Editor here at Upcomingdiscs. Gino started reviewing films in the early 1990's as a segment of his local television show Focus. He's an award-winning recording artist for Omega Records. Gino is currently working on his 8th album Merchants & Mercenaries. Gino took over Upcomingdiscs Dec 1, 2008. He works out of a home theater he calls The Reel World. Favorite films: The Godfather, The Godfather Part II, The Body Snatcher (Val Lewton film with Karloff and Lugosi, not the pod people film), Unforgiven, Gladiator, The Lion King, Jaws, Son Of Frankenstein, The Good, The Bad And The Ugly, and Monsters, Inc.
Cats 12 Days Of Christmas Giveaways: Day 1 Alita: Battle Angel From Fox