Posted in: The Reel World by Jeremy Butler on December 21st, 2019 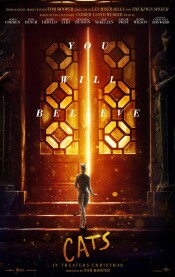 This film proves that not all things need to be adapted for the silver screen. This re-imagining of this Broadway musical was best left on the stage. Now I am saying this having never seen the musical, but given the execution of this film, I am forced to make that the assumption that the musical has to be better than what I witnessed at the theater. Despite having a top-shelf cast that included Idris Elba, Judi Dench, Ian McKellen, Rebel Wilson, Jennifer Hudson, and Taylor Swift, the film fails to entertain. This isn’t just a biased opinion, either; my wife, who was very excited for the film, fell asleep at multiple points and was highly annoyed by the story. I have no idea what was initially hoped for this adaptation, but I am hard pressed to believe that it was this. As much as I want to put the film behind me, there is one song regarding a magician cat that is just staying with me, furthering my frustration. The film was already going to have a difficult time making its mark based on the fact that is going against a film that is basically guaranteed to win not only this week but also subsequent weekends at well. Given the cult status of the musical, I assume that the die-hards will make the trip to the theater, and I would be curious to speak with any of them and find out if they were as disappointed as I was.

One of my main issues with the film had to do with the ineffective way that the story was carried out. Out of the blue, a cat named Victoria (ballerina Francesca Haywood) is dumped in a seedy part of town, and then suddenly a bunch of other cats surround her, and next thing we know the singing commences. This is basically how the entire movie goes; very little dialog, and the cast’s main way of communicating is through song. This method was very difficult to follow, as I felt that no real information regarding the overall plot or information about the characters was adequately explained. It was very difficult to form a connection with any, essentially because I knew very little about any of them. In fact, we don’t learn anything about the film’s central character until half way through the movie.

It’s not just with her, though; Hudson’s character is down on her luck. The circumstances of her situation had my interest piqued, but an adequate explanation to her situation is never forthcoming. It is hinted at the film’s central villain is responsible, but nothing more is offered. Then there is the matter of the film’s central villain, McHaverty, played by Idris Elba. Now it is difficult for me to speak out against Elba because I am such a huge fan, but I just have to say that this was a poor choice of film to participate in. Though his character does have a few moments where he is menacing, overall he is akin to a cartoon villain. Not to mention, his motivation regarding why he wants to win the competition is another plot hole.

Then there is the competition itself: The Jellico Choice. Basically, Jellico is a clan of cats from all walks a life that once a year met for the Jellico competition, which is overseen by the head of the clan, who then picks one cat to gift with a new life. First issue with that is: what is a Jellico cat? The explanation is mentioned in song, I believe, but I was unable to properly decipher the lyrics.   Secondly, it is unclear where our protagonist fits into this arrangement. There is also a bit of a love triangle thing going on in the beginning, but it quickly dissolves. In regards to the film’s ending, it just felt like we were right back where starting. It was as if no real progress had been made. All in all, it was just a disappointing venture.

Not every movie can be a hit. I get that, and based on what I’ve heard about the musical, this is a popular one, in fact one of the most popular, Broadway productions, but it is safe to say that the success that it found there will not be following the film adaptation, at least not from my perspective. I won’t rule out the idea that die-hard fans may find something to enjoy about the film, but for a newcomer like myself, I could have done with a lot more explanation as to what was going on. There was a time that I was not fully sure of certain characters’ names. In my opinion, if a bit more dialog would have been injected into the film, It would have helped a newcomer form a connection with the characters, something that this film really needed.

Jeremy Butler is a film school graduate of the International Academy of Design and Technology. He is been writing for Upcomingdiscs since 2012; however, movies have played a big part of his life for much longer. Favorite genres include horror, science fiction/fantasy, and comedy. Favorite movies are V for Vendetta, Boondocks Saints, Kiss Kiss Bang Bang, and The Godfather.
Ad Astra (UHD Blu-ray) (4K) Star Wars: The Rise Of Skywalker