Posted in: Contests by Gino Sassani on December 26th, 2019 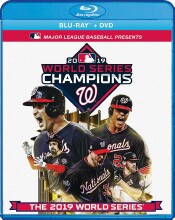 On The Second Day Of Christmas Shout Factory Gives To You:

The 2019 World Series on Blu-ray. The Washington Nationals beat The Astros in a thrilling Game 7. Hey, at least someone in Washington was winning in 2019. This historic 2-disc set includes the official MLB 2019 World Series film along with regular season highlights, clinching moments and even covers the World Series Parade. It’s all thanks to our wonderful friends at Shout Factory. So what are you waiting for? Shout!

Gino Sassani is a member of the Southeastern Film Critic's Association (SEFCA). He is a film and television critic based in Tampa, Florida. He's also the Senior Editor here at Upcomingdiscs. Gino started reviewing films in the early 1990's as a segment of his local television show Focus. He's an award-winning recording artist for Omega Records. Gino is currently working on his 8th album Merchants & Mercenaries. Gino took over Upcomingdiscs Dec 1, 2008. He works out of a home theater he calls The Reel World. Favorite films: The Godfather, The Godfather Part II, The Body Snatcher (Val Lewton film with Karloff and Lugosi, not the pod people film), Unforgiven, Gladiator, The Lion King, Jaws, Son Of Frankenstein, The Good, The Bad And The Ugly, and Monsters, Inc.
Merry Christmas & Happy Holidays from all of us at Upcomingdiscs. 12 Days Of Christmas Giveaways – Day 3: The Lion King (2019) From Walt Disney Studios