Posted in: No Huddle by Brent Lorentson on December 29th, 2019 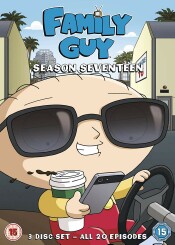 Family Guy has reached a level of impact upon the American pop culture where I believe the characters need little to no introduction.  Is there anyone, really, who doesn’t recognize Stewie? After all, he’s reached the status of icon and has even become a fixture of the Thanksgiving parade as one of the many floats.  Where The Flintstones, then later The Simpsons, were at one time the dominating animated family on television tackling day to day struggles of the modern American (each in their own and unique way), Family Guy (love it or hate it) now seems to be the go-to animated family. In this collection of 20 episodes, the creative force, Seth Macfarlane, and his team continue to deliver the laughs along with their twisted moral messages. In today’s culture, it seems like it is harder and harder to be a comedian and manage to not offend anyone, and for the first time I feel the show is restraining itself too much, and it’s hurting the product.  Family Guy has always been a show that was self-aware and would break the fourth wall, so it was not a big surprise when a character mentions how they’ve eased up on their jokes against the gay community.  Is this a move brought on because Disney now is writing the checks for those involved, or is this decision made by the writing team?  I want to believe this was a choice made by the writers where they felt they could still be funny without offending a group of people, but I kind of doubt it.  The appeal of Family Guy is that it’s a cartoon; it’s not a show that you should take seriously, though at times they do inject some nice social commentary.  Besides, after 17 seasons you would think viewers would know what they are getting into when watching the show, and if it offended them too much, they could easily change the channel.

I understand not every season can be great; even a bad episode of Family Guy can manage to be more entertaining than a show about celebrities dressed as rejected Muppet characters.  But … I was a bit disappointed with this season.  Starting off with “Married With Cancer”, where Brian thinks he meets the woman of his dreams who is dying with cancer only to find out her treatments have worked and she’s not dying after they are married.  It’s a fun idea as we see Brian go through his bouts of regret, but really, the jokes just didn’t seem to hit their mark.  Sure, I may have chuckled, but they really milked the slightest bit of humor of “cancer farts” to the point where it just got annoying.  Later in the season there is an episode “You Can’t Handle the Booth!”, and while I do appreciate the unique perspective, I feel this is one that missed its mark, but I still feel it has potential.  Basically they took an episode of Family Guy and had the Family Guy characters come in and do a commentary for the episode; here the humor is in what you hear and not so much what you are watching.  As someone who enjoys commentaries, there were elements I liked about this, but for the casual viewer I’d imagine this episode would be a chore to enjoy. It’s a smart move that the DVD has a version of the episode without the commentary.

Though there many episodes that are shrug-worthy in this set, thankfully there are a few gems along the way. Personally my favorite episode is “Island Adventure”, an episode that pairs up Stewie and Brian on an adventure to trash island to help recovers Stewie’s Big Wheel that was thrown away.  I’m a sucker for the episodes that pair up Brian and Stewie, but it’s the side story with Lois helping Quagmire hook up with middle-aged women that was just as entertaining. With “Big Trouble in Little Quahog”, the episode takes a page out of Honey I Shrunk the Kids when Stewie and Brian are shrunk down and they have to do battle against dust mites and dodge snot rockets.  This one was a lot of fun, but at the same time I felt there were some missed opportunities, but considering the episodes are 22 minutes, there’s only so much story you can ask for.  Then there is “Hefty Shades of Grey”, where Peter finds out his home is a murder house, and he gathers up Quagmire, Cleveland, and Joe to investigate for paranormal activity.  At the same time, Stewie and Brian attempt to find out if Chris is gay, only to find out he’s up to something else.  Really, I liked the idea of seeing Peter and his friends playing ghost hunters, and this easily had enough material to be stretched into a longer episode. Then factor in the Bruce Jenner jokes, and I feel this was easily one of their strongest episodes of the season.

At this point, if you’re a fan of the show, this is something you’ll consider picking up on DVD or searching it out on a streaming service.  While this may not be one of my favorite seasons, it still managed to keep me entertained.  Considering the amount of projects Seth MacFarlane has going, I’m impressed how the series continues to have steam going into an eighteenth season.  It may not be the greatest show on television, but it still manages to make me laugh while inserting a bit of social commentary from time to time, and that is something I’ll always be able to appreciate.

Brent Lorentson is a horror writer and film critic based out of Tampa, Florida. With a BA in Digital Film, he co-wrote and co-directed Scavenger Hunt. His short stories have appeared in various horror anthologies. In 2019 his short script Fertile Blood will be a part of the anthology horror film Slumber Party. He is currently working on his first novel A Dark and Secret Place set to be released in late 2019. Favorite Films: Taxi Driver, Fight Club, I Saw the Devil, The Wild Bunch, Dawn of the Dead, A Clockwork Orange, Pulp Fiction, Heathers, The Monster Squad, and High Fidelity.
Adopt a Highway (Blu-ray) 12 Days Of Christmas Giveaways – Day 5: The Nutcracker And The Four Realms From Disney Home Entertainment