Posted in: Disc Reviews by Jeremy Butler on December 29th, 2019 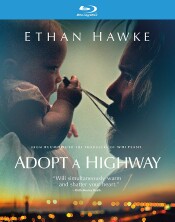 It’s been a while since a film has come along that has frustrated me as much as Adopt a Highway has.  The film opens up with numerous sound bites that are discussing the “three strike law” from the Clinton era.  This is pretty much used to set up a bit of a back story for Russ Millings (Ethan Hawke), a “victim” of this third-strike law that resulted in him serving 21 years for possession of an ounce of weed.  With this kind of opening, I’d be expecting this to be a film that would delve into the unfairness of this law and how it affected many individuals, but instead, this film had other plans.  The film takes on the journey Russ takes from his last day in prison to being thrust out into the free world again, but over the course of two decades, the world is nothing like it was before.  Russ is in a unique situation where he went into prison in the late 90’s, and upon his release he’s now in the digital age. Basically he’s never had an email, nor has he had the chance to discover internet porn or YouTube. There is so much potential with this character, but at the same time, while watching this, I couldn’t get past his numerous bad decisions.

The first of his many bad decisions comes when he finds a baby in the dumpster behind the fast food restaurant where he works.  With the baby there is a note that reveals the babies name is Ella. Conflicted about what to do, Russ decides to take the baby to his motel room, wanting to take care of it.  If he found a dog or a cat, then I can understand him wanting to take care of it, but seriously, this guy thinks he can take care of a baby?  At first it’s adorable seeing him make bad decisions with taking care of the baby, but very quickly we see how fragile this baby’s life is in his hands.  Just as the film seems to have its footing and we think it’s going to be about Russ and his adventures with the baby, the film takes a sideways turn.  This plot change could have worked if only the following story were just as interesting, but instead it’s a bit dull by comparison, and before you know it this film is already wrapping up, and you’re wondering, “That’s it?”

What saves this film from being a disaster is the heartfelt performance Hawke delivers.  Even with the bad decisions this character makes, we can sympathize with this character. We know he’s a good guy; he just makes bad, impulsive decisions. The film’s strength is when we see the interactions with Russ and Ella, which makes it more of a shame that their story is simply the first half of the film.  One thing that also stands out about Russ is the look they decided to go with: long stringy hair and a scruffy salt-and-pepper beard.  Along with the way the character dresses, it’s no wonder he gets sideways glances from everyone, because he looks more so like a hobo, not a guy trying to clean himself up and start his life over.  This somewhat changes in later part of the film, but what’s frustrating is we don’t get to see this change where he’s going to restart his life. What’s the point in having a character arc if we don’t get to see the arc?

This was the first film written and directed by Logan Marshall-Green, who has mostly spent his career in front of the camera as an actor.  While the film is definitely flawed, I can at least say he made a noble effort to tell a story with a message without coming on too strongly.  There are parts in this movie that are good; it’s like a collection of vignettes that are lacking a strong, connected narrative.  If the story simply could have expanded on either Ella, his bus ride, or his relationship with the father, this could have been a stronger story, but unfortunately this film took too many detours to arrive at its destination.

Adopt A Highway is presented in the aspect ratio 1.78:1.  The 1080p image is arrived at with an AVC MPEG-4 codec varies between 10-32 mbps.  The overall look of the film is a bit dark and saturated; one of the only sequences that is bright and “colorful” involves Russ taking Ella to the beach.  The only color that seems to pop is the yellow in the hoodie that Russ wears over the course of the film.  The film definitely has a low-budget digital feel to it, but there were no compression issues or artifacts that were noticeable.

The DTS HD Master Audio 5.1 track is an understated mix that is focused more on the dialog, which is fine, though there are moments where some of the surround speakers are utilized.  From the start when we are hit with a barrage of sound bites from news programs discussing “the war on drugs” as well as the cries of baby Ella from the dumpster, these are the scenes that jump out where the sound mix was really utilized.  The score helps carry the film, which isn’t loaded with any real use of bass.

Ethan Hawke is definitely the selling point of the film.  If you like the guy, then this is a film I’m sure you’ll appreciate, and it falls in line with several of the roles he’s taken in independent films.  While the film isn’t great, it definitely has its heart in the right place, so for those looking for a somewhat uplifting story, this might be right up your alley.

Jeremy Butler is a film school graduate of the International Academy of Design and Technology. He is been writing for Upcomingdiscs since 2012; however, movies have played a big part of his life for much longer. Favorite genres include horror, science fiction/fantasy, and comedy. Favorite movies are V for Vendetta, Boondocks Saints, Kiss Kiss Bang Bang, and The Godfather.
12 Days Of Christmas Giveaways – Day 4: Toy Story 4 From Walt Disney Home Entertainment Family Guy: Season Seventeen