Posted in: Disc Reviews by Michael Durr on January 7th, 2020 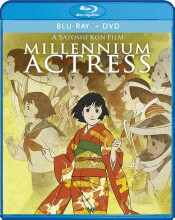 I think most people have had the fantasy of what a film of their life would look like through the camera lens.  The high points, the low moments, and everything in between.  Perhaps it would be boring (probably most of us), or just perhaps it would be brimming with excitement.  Whatever the situation, we just hope that somebody else would find it interesting or at least star our favorite actor or actress.  Today, we bring to you a review of an anime that tells the story of Chiyoko Fujiwara, an experienced actress, through one filmmaker Genya Tachibana’s passion and the lens of  his cameraman, Kyoji Ida.

We are in space where a female astronaut says her goodbyes as her crew pleads with her not to go.  The countdown starts.  The screen shifts back to Genya Tachibana, who is watching this presentation, which we now realize is a film staring the great Chiyoko Fujiwara.  An earthquake shakes the film room  where Genya is watching.  It stops after a minute, and Kyoji Ida comes in and tells him that they need to go.  The filmmaker gets up and starts to follow.  He stops and then decides to rewind the tape he was watching.  As he leaves, we watch the monitor display various moments of Chiyoko’s film career.  Cue credits and emotional music.

Ginei Studios is closing down as we watch the demolition of its original studios.  A sad day, and there is a tribute to the star who has carried it for better part of seventy years.  Genya, who we met earlier, wants to pay homage to the legendary Chiyoko Fujiwara as he films his documentary.  The cameraman, Kyoji, complains and says we should have done this thirty years ago.  Chiyoko, now in her seventies, has secluded herself in the middle of nowhere to live out her life.

Genya and Kyoji make their way to the place where Chiyoko makes her home.  They are greeted by the housekeeper, who lets them inside.  They talk to her as they wait for the actress to make her appearance.  Miss Fujiwara finally does appear as Genya and Kyoji look on in wonderment (for different reasons).  The interview is about to start when Genya reaches into his pocket and pulls out a box to hand to the fabled actress.

Chiyoko opens the box, and inside is a key.  She remarks how the artifact had been almost forgotten.  At that moment, another earthquake takes hold and shakes the entire home.  As soon as it stops, the crew decides they better get started with the interview.  As it turns out, Chiyoko was born under an earthquake, and then the story starts with being discovered by the talent relations of the studio.

The rest of the film bears some explaining.  As expected, we are taken through various moments of Miss Fujiwara’s life and film career.  It is done so with Genya and Kyoji being semi-active participants in the scenes as they unfold (and perhaps Genya being a little more active).  Those scenes are moments from her life as well as the movies that she played.  It is done in a way that blends fantasy and reality to fantastic results.

The movie has scenes from feudal Japan and taking place in Manchuria to the Victorian era to space and even a little bit of Godzilla thrown in for good measure.  The key which was introduced at the beginning of the interview is actually integral to the rest of the story.  It is quite interesting to see how this object plays a vital role in all facets of Chiyoko’s life.

It is a very moving film, and it sneaks up on you with its emotion.  While I thought Genya and Kyoji being a part of flashbacks was going to be somewhat hokey at its inception, it is explained very well and does a great job of providing some humor and even adding a touch or two of additional emotion. The movie also does a great job of establishing a moving narrative that never loses focus as it moves from scene to scene.  The viewer often does not have a chance to catch their breath and stays intensely engaged.

The film is shown in a 1.85:1 widescreen format.  The film was released in 2001 but restored and remastered for this Blu-ray copy.  There is a lot of detail in most of the animation frames, but it does suffer some from the drabness of the color palette.  To be fair, it matches the mood and the events that surround the feature.  There is not much in the way of nighttime scenes, but rather dreary scenes where the action is heavy or the intention is to show heavy despair.  It is not intended to be a happy movie by nature, and the animation certainly follows that.

The audio tracks are DTS HD 5.1 in Japanese and English.  As perhaps expected, this is a very dialog-driven movie with fits of music as is necessary to complete the mood.  Dialog primarily sits in the center speaker and is clear, and we are easily able to distinguish the various characters on screen.  The music during the film is lovely and does well to compliment the action as well as the high drama and emotional scenes.

What is a little surprising is that we do get a great deal of surrounds in dialog and also the action which often becomes quite lively that happens around our primary leads.  It helped greatly to immerse the viewer that extra step and was most appreciated.  Subtitles are provided in English for the original Japanese soundtrack and English SDH (presumably for the English audio).

Interview with Abby Trott  7:46: Abby Trott did the English voice for young Chiyoko.  She talks about what drew her to the movie and how she identifies with the character she voiced.  Abby is also in love with the pursuit (a main theme in the film), as she discusses other themes in the movie.  She also gives some advice on voice acting and how she prepares for a film.  Even though she believes she is living life by the seat of her pants, it’s quite a nice and short interview.

Interview with Laura Post  20:07:  Maybe I should have pursued voice acting more, because there are sure some beautiful women in this field.  Anyway, Laura is the English voice for Eiko.  Eiko is the older actress in the film and often plays an antagonist to Chiyoko in her films.  Laura talks about how she is similar to Eiko.  For example, Laura often goes in for the role of the hero and often has been cast as the villain instead.  This is similar to Eiko’s arc in the film.  She also talks about the relationship between Eiko and Chiyoko and the discussion of other characters.  She also gives some advice on voice acting and lists her influences such as Little Mermaid and Rob Paulsen.  Laura tries her very best, and I’d say she’s accomplished a lot as well.

Interview with Producer – Masao Maruyama  32:28:  This is in Japanese, but there are English subtitles provided.  Masao shares his thoughts on the movie and talks about his previous work with Satoshi Kon the director and story writer of the film including Perfect Blue (which I would like to track down at some point).  They wanted to try something different with Millennium Actress, and they liked the concept behind Millennium Actress.  Not surprisingly, but there were influences for Chiyoko and they included Ms. Setsuko Hara, Hideko Takamine and Kinuyo Tanaka.  Finally, Masao talks about change in the industry and gives some advice for budding young animators.

Interview with Producer – Taro Maki  8:32:  Also in Japanese with English subtitles.  Taro talks about his memories of the film and his association with Mr. Kon on previous films.  He talks about what makes the film special and Kon’s vision and power to amaze.  Taro switches to the industry and how it is shifting to digital production.  Finally, he provides some advice for anime professionals as we round out this foursome of interviews.

Tidbits aside, this film does a fantastic job of giving us something that the medium of animation doesn’t see very often: the documentary or more specifically, the docu-drama.  It provides depth, it provides emotion and I dare say it even provided a tear or two in its closing moments.  There isn’t much to provide in a negative sense but for anybody who likes the thrill of adventure and a tale of searching for love would find much to appreciate here.

The overall presentation and audio of the film are excellent and show the efforts of a quality restoration by Shout Factory and everyone involved.  The extras are minimal unfortunately but at least show some form of effort considering the director(and writer), Satoshi Kon died in 2010 of pancreatic cancer.  This feature comes easily recommended.  It is not only for anime fans but for anybody who can appreciate a wonderful story.  This film proves that animation is a medium with the potential for all types of fantastic movies and not just a genre.  Enjoy.

Michael Durr has been reviewing movies for the better part of fifteen years now. He primarily enjoys thrillers, sci-fi, animation and even a little courtroom drama. His favorite films include Escape from New York, the Goonies and anything with Alyssa Milano. When he’s not praising Kurt Russell as the greatest actor of our time or scratching his head over a David Lynch flick, he’s spending time at home in Texas with his lovely wife, Lori and his amazing son. How they put up with him is a mystery, but even Basil Rathbone doesn’t have the time to solve that one.
12 Days Of Christmas Giveaways – Day 12: Win Imprisoned From Cinema Libre Studios Family Guy Season Seventeen