Posted in: The Reel World by Brent Lorentson on January 13th, 2020 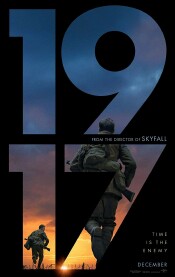 For a while it was looking like 2019 was going to be a lackluster year for films. Once fall rolled around, we seemed to get bombarded with some quality award-worthy films, but aside from Once Upon a Time in Hollywood, nothing jumped out at me as Best Picture.  Sure, Joker was great, and I had a great time with Uncut Gems, but when 1917 rolled around, this was the film that left me in awe. Sure, there have been some great war films over the years. Platoon and Apocalypse Now are great Vietnam films; Saving Private Ryan is definitely a contender as the best film about WWII. Really, it would have been difficult to say what’s the best war film out there … well, that is, until now.  It’s a bold statement, and I know many will disagree with me, but after two screenings of 1917, I’m feeling pretty confident when I say this is the best and my favorite war film.  What’s even more impressive is how 1917 manages to stand out from the big blockbusters, sequels, and comic book films and stand alone as a film that can remind viewers about that magic that comes with seeing a movie on the big screen and in Dolby sound.

The film’s setup is relatively simple. Lance Corporal Blake (Dean-Charles Chapman) and Lance Corporal Schofield (George MacKay) are tasked with the mission to cross into enemy territory to deliver a message to prevent an attack that will lead 1,600 men into a trap.  The pair has to complete their mission before daybreak the next day; failure will pretty much mean certain death for Blake’s brother and most of the troops. No time is wasted in getting the story in motion, and once the two men set off on their journey, the film simply doesn’t slow down.  The film takes along their journey from deep into the trenches, to across a blood-soaked, corpse-riddled battlefield, to boobytrapped dugouts, and cities in ruin from the war.  I couldn’t help but think to myself the second time around how the journey that Blake and Schofield isn’t all too different from the journey the Frodo and Sam took on their adventure to destroy the ring by taking it to Mordor, only the distinct difference is 1917 is set during WWI.

What sets 1917 apart from many other films is how the film is presented, as though it is one uncut take.  Of course there are cuts, and part of the fun is figuring out how they pulled off some of these long sequences, but it’s the film’s cinematography by Roger Deakins that is most impressive.  Just on a technical level, how some of these sequences are executed simply left me in awe.  There are a few sequences in this film that are simply incredible. One comes early on as we watch Blake and Schofield work their way across the battlefield and the camera moves over corpses and through barbed wire and over craters and the characters are navigating their way through the carnage as well.  It doesn’t seem all that complex, but that’s part of the beauty of the sequence. Deakins just makes it look like a simple tracking shot. Then there is a plane crash sequence that has me scratching my head on how they pulled off that sequence … but the moment that really left me impressed is a night sequence where a character is running through the ruins of a city being pursued by Germans as flares explode around him as the rising score by Thomas Newman plays.  This is the point where I have to say Sam Mendes stepped up to becoming one of the great directors of our time.  I’ve been a fan of Mendes since American Beauty, and up until now I thought Road to Perdition was his best work, but what he and his crew managed to pull off is something rather remarkable.

The film isn’t just a technical marvel; the performances from Dean-Charles Chapman and George MacKay are what help invest us in this story.  I’d imagine after this film their careers will most likely lead to even bigger roles, but it’s MacKay who carries the brunt of work in this film and delivers a very subtle and nuanced performance.  While Blake and Schofield go about their mission they do come across a few familiar faces like Colin Firth, Mark Strong, and Benedict Cumberbatch. Though each actor delivers an excellent performance, none of them make their appearances distracting or feel like a forced cameo. Sam Mendes and his writing partner Krysty Wilson-Cairns are not trying to make any big statements with their script. Instead their focus is on keeping us invested in the characters of Schofield and Blake as they go on their journey, never allowing them a reprieve from danger and in the process reminding us of how little time they have left to complete their mission.  Because the plot remains wrought with tension and doesn’t ease up until the final credits roll, this is why I feel it stands above many of the great war films from the past.  You don’t need to have a message hit over the audience’s head to make your film great. Sometimes trying so hard to inject a message in your film can hinder it from reaching its full potential.

After winning the Golden Globe for Best Drama, I’m hoping this will give the film the box office push it deserves as it releases over the weekend.  Just a couple years ago Dunkirk was released and was a box office smash as well as an Academy Awards contender; does 1917 have the same outcome to look forward to?  Time will tell on that one, but if I were to ask my Magic 8 Ball, I’d imagine it would say that success is likely for this film.  From the visuals to the sound design and the score, this is a film is worth checking out on the biggest screen you can find with the best sound system being offered at your local cinema.  The film is just shy of two hours and really doesn’t feel that long at all.  I love this film, and it’s the kind of film you just want to talk about with others after seeing it.  There is so much more I can say about this film, but this is an experience that shouldn’t be spoiled, and the way the film was shot allows for one of the most immersive viewing experiences in a long time.

Brent Lorentson is a horror writer and film critic based out of Tampa, Florida. With a BA in Digital Film, he co-wrote and co-directed Scavenger Hunt. His short stories have appeared in various horror anthologies. In 2019 his short script Fertile Blood will be a part of the anthology horror film Slumber Party. He is currently working on his first novel A Dark and Secret Place set to be released in late 2019. Favorite Films: Taxi Driver, Fight Club, I Saw the Devil, The Wild Bunch, Dawn of the Dead, A Clockwork Orange, Pulp Fiction, Heathers, The Monster Squad, and High Fidelity.
Joker (UHD Blu-ray) (4K) The Orville: Season Two