Posted in: No Huddle Reviews by Gino Sassani on January 15th, 2020 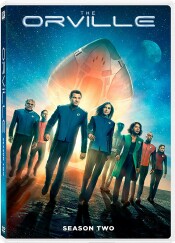 When Star Trek: Discovery was announced, I was quite happy to hear it. There had been a long gap since Star Trek had been on television, and I figured it was long past time to fly through the galaxy on a starship once again. The show finally aired after some real issues getting off the ground, and before I knew it I was back in a starship having a blast once again. Except it wasn’t on Star Trek’s Discovery I was having all of this fun. It was aboard Seth MacFarlane’s Orville that the true spirit of Gene Roddenberry was exploring space once again. Who would have thunk it? Yes, The Orville is considered a comedy, and there are plenty of silly moments and ideas. But even with all of that spoof atmosphere, MacFarlane manages to capture the real spirit that Trek fans have come to feel for that franchise. Honestly, I’m not sure The Orville would have gotten through its first season if not for Alex Kurtzman destroying yet another beloved franchise. Trek fans turned to this show in droves out of frustration and desperation, and MacFarlane welcomed them aboard with a laugh and some alien adventures. It’s a great example of that whole nature-abhors-a-vacuum thing. When Discovery went off the rails, The Orville filled the void left behind. If you missed the first season, you can get them now on DVD from Fox.

Ed Mercer (MacFarlane) was an up-and-coming officer in the Union Fleet when he walked in on his wife sleeping with a blue alien. It threw him and his career into a downward spiral. But the Union has thousands of ships, and they need captains, so he is finally offered a command of his own. It’s going to be on a mid-sized ship with no real history of distinction, but he takes the command. There turns out to be something of a catch to the offer. His first officer is going to be Commander Kelly Grayson (Palicki), the now ex-wife he caught cheating. Apparently she’s the only qualified officer available, so he’s in a take-it-or-leave-it situation. What he doesn’t know is that she’s the one who petitioned for him to get a command because she felt guilty about causing his career to suffer.

Meet the other executive officers of the ship:

Dr. Claire Finn (Jerald) She could have had any ship in the fleet, but she figured with Mercer’s reputation there’s going to be a lot of need for a good medical officer. This season we get to spend a lot more time with her children. She’s also going to have a “relationship” with the cyborg character.  Isaac (Jackson) is an artificial life-form who believes he is superior to organic life-forms. He’s basically Data on this show. He has the same kinds of conversations about human characteristics that we saw with Spiner’s character. You can’t see the actor’s face because he has a huge metal plate with bright-light-bulging eyes.

This year we learn a lot about his background and his planet when it’s revealed he was the vanguard in an invasion plan. He has to make a choice between his crew and his people. We also get one of the show’s largest battles here that rival The Next Generation’s huge battle at Wolf 359. This two-part episode and battle will rival in scope anything we ever saw on Trek.

Lt. John LaMarr (Lee) is a ship’s navigator who eventually becomes the chief engineer, much as LaForge did in Next Generation. You have to believe the name is no accident. He’s smarter than he wants people to know, often pairing with Lt. Malloy on practical jokes and basic clowning around. He’s a soda junkie who has to have a big-gulp-size drink at the helm.

Lt. Gordon Malloy (Grimes) is Mercer’s friend and was personally recruited to join his crew. He’s a hotshot pilot who likes to joke around too much and might have a beer on his lap when he’s at the controls. He finds a kindred soul in LaMarr, and the two of them often cause trouble together.

Lt. Commander Bortus (Macon) is the bridge alien. He looks and sounds a lot like a Klingon. He’s from a single-sex species, which leads to one of the better episodes of the first season. He has a spouse on board who is always jealous of his time at work. His species only has to urinate once a year. His species lays eggs. He’s the stoic, serious one on the bridge and could have easily been a security officer. Again we explore the culture a lot more this season. We discover that they divorce through murder, and we get to witness that once-a-year-urination gag in a spoof of Spock’s Pon Farr.

Lt. Lara Kitan (Sage) is the ship’s security officer. She’s also an alien with just a little head and nose changes. She’s super strong, because she comes from a planet with a much denser atmosphere and gravity field. She doesn’t really like that it sets her apart, and her species is really more known for their intellect. Of course, she’s a very petite woman who doesn’t look like she’s so strong. She becomes ill and ends up back on her planet where we meet her family. Sadly, she leaves the show mid-season and is replaced with a member of the same species. The home-world episode features two of Star Trek’s best doctors, Robert Picardo and John Billingsley.

Lt. Talla Keyali (Szohr) She takes over for Lara and shares many of the same strengths, as she is of the same species.

Finally there’s Yaphit (MacDonald), who is a gelatinous glob who works in engineering and is entirely CG.

From the crew alone there are so many Trek references that it’s not hard to see where MacFarlane’s fan-boy ideas come from. That’s not where the comparison ends. Many of the plots and other devices on the show are pretty obvious Trek spoofs. All except the design of the ship itself. It has a lot of exterior rails that look more like Andromeda than Enterprise. The engines are not warp, but quantum drives, but it’s pretty much the same idea. There’s no prime directive, but we discover in an episode that it’s a serious crime to influence a more primitive civilization. Trek connections can be found in several of the guest cast that includes Robert Picardo. Brannon Braga serves as a writer and producer. He served many years in the Rick Berman years on Star Trek. Trek stars Jonathan Frakes (Riker) and Robert Duncan McNeill (Paris) direct episodes of the season. Another producer is Trek’s old science consultant, Andre Bormanis. MacFarlane has surrounded himself with some of Star Trek’s best production brains. Too bad these folks were available. Alex Kurtzman obviously didn’t want these kinds of brain-trust folks onboard the Discovery. It’s their loss and MacFarlane’s gain. There are more Star Trek people associated with The Orville than on Star Trek right now. What’s up with that?

It’s not just the references and people that make this a good show. It goes where no spoof has gone before, because it takes itself seriously enough that it entertains even when it’s not being funny. That’s the secret sauce right there. Jokes only go so far, and we soon become immune to the concept itself as a joke. In order to get longevity, a series needs to entertain with its own originality beyond the icons it might be having some fun with. The Orville is often quite serious and touches on the kinds of stories Trek fans have always appreciated. It doesn’t survive merely on its humor.

There are two multi-episode story arcs this season. The story that deals with Isaac’s people is not only huge in production scope, but it also drives a lot of the season stories after its airing. The new enemy is very much like the Borg and require new allies in order for the threat to be met. The second is a time travel story that ends the season with a couple of episodes that throw us into an alternate time when the crew are not fighting the war on the front lines but find themselves throughout space in order to fix the timeline. It takes us back to when Mercer and Grayson first met, and it turns out the fate of the entire galaxy depends on them having a second date. That’s the kind of thing I’m talking about. On the surface it’s such a silly idea, but the show manages to put stakes behind the premise, and it becomes quite a good drama. It’s the strength of the entire series.

The show also works because the production values are high for a comedy. The f/x are treated just as they would be if this were a serious space show. They signed on folks like Jon Favreau to help get things right. Everything about this show is built solid and taken seriously by those in charge. They don’t act like they’re making a spoof, so it doesn’t look that way all the time. There are plenty of silly moments, to be sure. You will get plenty to laugh at. But it’s better Star Trek than Star Trek is right now. The series is moving from Fox to Hulu for its third season, and I’ll be curious to see if it can maintain its momentum as a streaming show. It’s all part of the Disney acquisition of Fox and a shuffle of their properties. If you haven’t checked out the show, you need to. Yeah, it’s somewhat of a cliché. “Clichés become clichéd precisely because they’re valid enough to bear endless repetition.”

Gino Sassani is a member of the Southeastern Film Critic's Association (SEFCA). He is a film and television critic based in Tampa, Florida. He's also the Senior Editor here at Upcomingdiscs. Gino started reviewing films in the early 1990's as a segment of his local television show Focus. He's an award-winning recording artist for Omega Records. Gino is currently working on his 8th album Merchants & Mercenaries. Gino took over Upcomingdiscs Dec 1, 2008. He works out of a home theater he calls The Reel World. Favorite films: The Godfather, The Godfather Part II, The Body Snatcher (Val Lewton film with Karloff and Lugosi, not the pod people film), Unforgiven, Gladiator, The Lion King, Jaws, Son Of Frankenstein, The Good, The Bad And The Ugly, and Monsters, Inc.
1917 The Kill Team (Blu-ray)