Posted in: Disc Reviews by Jeremy Butler on January 28th, 2020 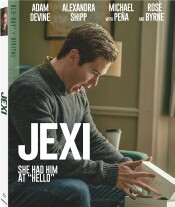 A modern day romantic comedy, as well as a commentary on the co-dependent relationship that society is now engaged in with their phones. I know we all see it, with infinite information at our favorite fingertips and the ease with which we now can conduct their lives, whether it be finding out the name of a song on the radio via an app, getting directions to a place we have ever been, or merely playing music while we conduct other task, our phones have become our conduit to the world, removing a lot of the obstacles that we used to face in everyday life. However, that assistance comes at a cost as we now have come to rely on our phone to accomplish task that we used to go out and do on our own. To top things off, we have decided to connect with people on social media, relying on how many people are following us on Instagram to determine popularity, rather than actually human interaction. JEXI perfectly captures this idea as we observe our lead character Phil played by Adam Devine struggle to engage with the beautiful Cate played by the gorgeous Alexandra Shipp. Thankfully his phone is there to help him; however, what happens when his phone begins to feel neglected?

Phil is the very definition of an introvert, he is shy and awkward and spends more time interacting with his phone than with actual people. When he accidently breaks his phone, his replacement comes with the virtual assistant, JEXI, agreeing to the user agreement without actually reading, he basically consents to JEXI running his entire life. There is a bit of a trial and error where JEXI forces him out of his comfort zone an into activities that he normally would avoid, but once he embraces JEXI’s help thing get better. He becomes more popular at work and even manages to meet a girl unlike anyone he has ever known.

As this new relationship begins to flourish, Phil’s reliance on JEXI begins to lessen, causing his phone to become neglected. Declaring her love for Phil, JEXI begins to turn Phil’s life upside down when he rejects her declaration. With unfettered access to Phil’s life, JEXI wreaks havoc disrupting every part of his life that she once helped make better.

This part had me in tears. This was the penacle of Rosa Byrne’s performance as the virtual life coach Yep in case you didn’t recognize her voice through the autotune, that is Rosa Byrne of Bridesmaid and Neighbors fame. Interesting enough, her contributions to the film were added in post-production, so there were times with Adam Devine had to interact by himself. That is a credit to him, because this back and forth that he engaged in with the phone was utterly convincing. 2019 was a big year for Mr. Devine, starring in this romantic comedy as well as Isn’t It Romantic along side his Pitch Perfect co-star Rebel Wilson, transitioning out of supporting roles to carrying his own movies. This transition is much deserved, as shown in this film as he proves his ability to carrying a film through his own brand of awkward comedy. While awkward, he is also charming, best shown in during the conversation he stumble through with Cate, as well as coffee shop scene when she subtlety attempts to give him her phone number and it initially comes completely over his head, but he recovers with grace.

Speaking of big years, we can’t forget Alexandra Shipp, whose 2019 resume includes X-MEN: Dark Phoenix and Shaft. Shipp walks a fine line between drop dead gorgeous but still approachable. She is light-hearted with an edge of danger, as she convinces Phil to sneak into a concert, which leads to a situation that could have lead to a horrible situation, but lead to a epic smoke session with Kid Cudi. As if the film needed anymore help to be awesome, it’s got Kid Cudi. Not only that, it has Kid Cudi talking about how great Days of Thunder is. Even if you aren’t a fan of the movie, I bet you wouldn’t be able to argue with Kid Cudi’s analysis of the film.

As I said earlier, JEXI is a romantic comedy for the modern day and it one of the most truthful representation of a co-dependent relationship that I have ever seen, told in a great comedic manner. It is a film that I expect to re-watch very soon in the near future. It is a great couple movie and speaking as to my other half, she has already put me on notice that she expects to watch it again soon. So I guess that settles that because like JEXI she runs the show.

Jeremy Butler is a film school graduate of the International Academy of Design and Technology. He is been writing for Upcomingdiscs since 2012; however, movies have played a big part of his life for much longer. Favorite genres include horror, science fiction/fantasy, and comedy. Favorite movies are V for Vendetta, Boondocks Saints, Kiss Kiss Bang Bang, and The Godfather.
Big Little Lies: Season Two Doolittle