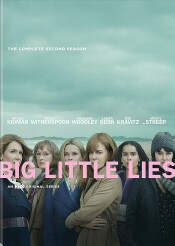 As a man, I have watched my fair share of Desperate Housewives, Mistresses, Sex and the City, and even reality shows like Real Housewives of “Insert Name Here” county or city.  I’m not sure any of it was by choice.  Well, Mistresses did have Alyssa Milano, so there is that.  I have learned, however, that while it might be undesirable to watch these types of shows, typically, it can be a good thing to do with your better half.  It can broaden the lines of communication, and if nothing else you can sit there with your loved one and collectively wonder how high your tolerance for pain is.  Enter Big Little Lies Season Two.

At the end of the first season, we learned that Perry Wright (played by Alexander Skarsgard) was murdered.  Technically, it was Bonnie Carlson (played by Zoe Kravitz) who issued the final push which sent him down the stairs to his demise.  However, there were four others involved in the altercation including Madeline McKenzie (played by Reese Witherspoon), Renata Klein (played by Laura Dern), Jane Chapman (played by Shailene Woodley), and Perry’s wife Celeste (played by Nicole Kidman).  While it was justified due to the repeated abuse of Celeste and rape of Jane, the fact remained that it was murder.  The five women collectively decided to say that Perry slipped and that the murder was accidental with nobody at fault.  But as we know, secrets are sometimes hard to keep.

Cold Little Heart plays as the waves crash and our second season opens.  Somewhere unknown, Bonnie is walking alone, deep in her own thoughts and guilty conscience.  The various women of the show, now known as the Monterrey Five, reflect on events from the past season and the altercation with Perry.  We flash to Celeste, who is asleep but having all too vivid and frightening dreams.

Celeste wakes up from the nightmare only to see her mother in-law, Mary Louise (played by Meryl Streep)  who is staying with the family in the wake of her son’s death.  She is concerned about Celeste, but at the same time she is trying to find out what really happened on that faithful night.  Meanwhile, at the police station, Detective Adrienne Quinlan (played by Merrin Dungey) rewinds the interrogation tapes as she examines the case.

Second grade is starting at the Otter Bay Elementary School.  The parents bring in their children to begin their year, while Celeste, Madeline, Renata, and Jane comment on how lost and withdrawn Bonnie has been since the incident.  Renata also decides to confront the new second grade teacher, Michael Perkins (played by Mo McRae) and tell him that she expects her Amabella (played by Ivy George) to not suffer any further bullying or abuse from her fellow students.

In another part of town, Ed Mackenzie (played by Adam Scott) runs into Tori Bachman (played by Sarah Sokolovic).  Ed is still unaware that Tori’s husband Joseph (played by Santiago Cabrera) had an affair with his wife, Madeline.  Tori flirts with Ed briefly and makes mention of her breast job as Ed becomes uncomfortable.

In other events, Celeste is still getting therapy and still taking the blame for the events surrounding Perry’s death.  Jane Chapman is now working at an aquarium and takes a liking to fellow employee Corey Brockfield (played by Douglas Smith).  Renata has been selected for a photo shoot to show “Women in Power”.  Madeline’s older daughter, Abigail (played by Kathryn Newton) proclaims that she does not want to go to college.  And Bonnie?  She’s still withdrawn and alone.  (Don’t worry, she stays like this for most of the season.)

As the season unfolds, Ed does eventually find out about Madeline’s infidelity.  The other major story line involving the men has to do with Gordon (played by Jeffrey Nordling), who is suddenly arrested by the FBI on suspicions of security and mail fraud.  But the big story line for the second season has to do with Celeste who is trying to work through her abuse and Mary Louise who is trying to understand what happened to her son and why he is now dead.  Mary Louise doesn’t want to believe that her son abused Celeste, or raped Jane for that matter, which leads to some tense moments and of course a showdown.

On to the good parts.  Meryl Streep does a wonderful job of playing the antagonist of season two while doing her best to dress down verbally just about every single female in Monterrey.  She does it in such a delicate manner that often you don’t realize she just insulted somebody until they respond in a negative manner.  She’s a welcome addition to this cast and does the lioness’s share for certain.  The other members of the cast do their best to advance their character and plot.  I am still enjoying Jane’s character as she continues to be somewhat separate from the rest of the cast.

But unfortunately, that’s where the positivity ends.  The first season had a rather unique premise to it.  We did not know who got killed or who committed the action.  It played out like a thriller instead of a soapy drama.  What did we get in Season Two?  Straight into the soapy drama, with no sizzle, mind you.

Instead, we get a much more reserved Reese Witherspoon (who practically goes straight for the rom-com cliches) and Laura Dern (at least the last episode when Renata shows up) for that matter.  Zoe Kravitz who was a delight in the first season turns into a zombie for this season, which makes sense to the plot but at the same time is a drag every time she shows up on the screen.  Perhaps it was the writing that dragged it down.

They could have easily had another mystery for us to unravel.  Instead, it’s fairly straightforward and leads us into a predictable cliffhanger.  Personally, I would have used the amazing dynamic they established in the first season and kept it going.  Instead we have Celeste versus Mary Louise in a rumble, and everything else is in some sort of a side story.  By side story, I mean like Wheezy in Toy Story 2.  Yeah, that poor penguin.

If you are looking to get this season on DVD or Blu-ray, the discs do include a 37-minute special feature entitled The Lies Revealed, a Conversation with the Cast of Big Little Lies.  It includes all of the Monterrey Five along with Meryl Streep in a in-depth conversation.  Well, as in-depth as you can get with mimosas and discussing hair color because some of them happen to not be blonde.  By the way, Nicole Kidman doesn’t work as a blond.  There, I said it.  It’s funny, as we get further into the conversation her Australian accent comes out.

But their discussion (which includes clips from the show) takes time to discuss the community of the show and how they did their best to make it very similar to the actual Monterrey, California.  They also talk about the tie-in with the novel by Liane Moriarty as well as other subjects including the concept of lying (nothing juicy) and the supporting cast of guys, who they put over pretty well.  It was nice to see these six together, especially Meryl Streep.  But it does also drone, as my wife asked at one point, “Do we really have to watch this?”  And this comes from the woman who watches the Teen Mom reunion specials (maybe she was expecting more action).

Speaking of my wife, she also like myself did enjoy the first season.  It was different; it was fresh.  The cast was interesting.  The prospect of Meryl Streep added a lot to the cast.  But there was nothing there, no real intrigue was left; just a bunch of women trying to keep a secret.  It was boring, and while I think we both would watch a third season, I don’t think we would be overly excited for it.

The third season.  Fans of the show probably have seen very little news in regards to another season of Big Little Lies and none of it positive.  The truth is from what I can tell and read that its probably not going to happen.  The story writes itself (a little too well), but the stars like Kidman, Witherspoon and Dern have ridiculously busy schedules, and trying to merge those is hectic at best and ridiculous at its worst.  Honestly, if they knew that this wasn’t going to work for another season, they could have wrapped up the cliffhanger in one or two episodes and put a bow on it.

Maybe that’s what they end up doing.  Spend 90-120 minutes wrapping it up and then calling it a day.  The show has its fans, and between the nominations and the awards it proves that this is a hot commodity.  But unfortunately it looks like this series will end on something of a down note.  It’s a shame, too, because mega-casts like these don’t come around very often, and there was wasted potential.  As is, the second season is in the middle for me (and my wife).  Hopefully someday the schedules and the stars align.  Until then the best we can do is fantasize about possible plot-lines for a season that will probably never be.  Enjoy.

Michael Durr has been reviewing movies for the better part of fifteen years now. He primarily enjoys thrillers, sci-fi, animation and even a little courtroom drama. His favorite films include Escape from New York, the Goonies and anything with Alyssa Milano. When he’s not praising Kurt Russell as the greatest actor of our time or scratching his head over a David Lynch flick, he’s spending time at home in Texas with his lovely wife, Lori and his amazing son. How they put up with him is a mystery, but even Basil Rathbone doesn’t have the time to solve that one.
Abominable (UHD Blu-ray) Jexi