Birds of Prey: And The Fantabulous Emancipation of One Harley Quinn

Posted in: The Reel World by Gino Sassani on February 8th, 2020 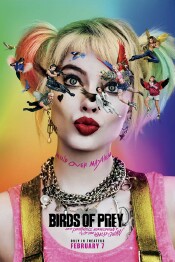 “I’m the one they should be scared of! Not you, not Mr. J! Because I’m Harley Freaking Quinn!”

For too many years now, the DCU (DC Universe) of films has been guilty of an overwhelming sense of foreboding and darkness. Of course, Chris Nolan pretty much started the trend, while Zac Snyder completely embraced the idea. The Chris Nolan Dark Knight films were a great success, and they should have been. The darkness works wonderfully with a character like Batman. But then Snyder and his DC film gang allowed this brooding darkness to inhabit all of their characters in feature films and never quite appeared to understand why the sometimes camp of the Arrowverse (The TV DC Universe) is so much more appreciated by fans. Wonder Woman stands out as the lone exception to this trend, and that’s why it’s so much better than the others. Now it seems the folks at the DCU are attempting to showcase their ability to be more flexible and less cookie-cutter. It started with Joker, which was one of the more disturbing comic book films to come along. Now DC has taken us in a completely opposite direction with the cumbersomely titled Birds Of Prey: And the Fantabulous Emancipation of One Harley Quinn. Working as a sort of apology for Suicide Squad and attempting to forge a DC version of Deadpool so that they can play in the R-rated waters of comicbookdom, Birds Of Prey manages to throw a ton of fun our way, even if the characters are obviously winking at the audience the entire way through.

Harley Quinn (Robie) has long enjoyed the protection she has gotten over the years as The Joker’s girl. It’s made her quite spoiled as she menaces Gotham City and its dangerous citizens with impunity. But now the two have broken up, and she rides as far as she can keeping the breakup a secret. But one thing Quinn shares with our dog Vesta is that she has really bad impulse control. When she decides to finally send the world a message that the relationship is over, she blows up the chemical plant where the two fell in love. It’s an explosive message and one she didn’t quite think through. Now everyone she’s messed with in the underworld is free to exact some revenge for all that she did under Joker’s protection. Trust me when I tell you, that’s a lot of angry bad guys.

One of these angry bad guys is mob kingpin Roman Sionis, aka The Black Mask (McGregor). When he finally captures Quinn, he’s about to have the skin from her face peeled off to satisfy his ghoulish number one henchman’s proclivities. But just as the unkindest cut begins, she offers a deal. Sionis has just had a huge and valuable diamond stolen by street urchin and Dickensian character Cassandra Cain (Basco). Quinn offers to retrieve the diamond in exchange for her life. Sionis takes the deal but decides to have a little fun with it all and offer an open bounty of a half million dollars to give Quinn some healthy competition. The results is tons of crooks all wanting to score the half million and get revenge on Quinn. It’s like getting a bonus, and suddenly Quinn and Cain are on the run from everyone.

Everyone includes Detective Montoya (Perez), who isn’t getting much respect at the Gotham City PD, where her former partner has moved up in the ranks by taking credit for her work. Now she’s investigating the deaths of hoods who are being killed by a crossbow killer … except don’t call her that. Of course, we’re talking about Huntress (Winstead) who is taking revenge on the dudes who murdered her entire family when she was a kid. Sionis happens to be the last name on that list. Black Canary (Smollett-Bell) works for the bad guy, first as a singer, then as a driver. Unfortunately, you’re not going to see a lot of her famous Canary Cry. There’s really not a team-up until the end, and the film appears to have rewritten the origin story of the Birds Of Prey as being formed because of this Harley Quinn adventure. The story appears rather complicated and convoluted, but it’s much simpler than all of that. This is all happening as a way to bring together a group of rather lesser-known DC characters without having to go through all of that troublesome origin story baggage.

There is little doubt, at least in my mind, that Harley Quinn is intended to be DC’s version of Deadpool. She narrates the film in the same kind of offbeat style and offers the same kind of hindsight additions as you’ve come to expect in Deadpool, including the wit and sarcasm. Quinn even breaks the fourth wall on at least two occasions. Complete with the R-rating, DC would love to have that kind of a franchise to play with. Unfortunately, Harley Quinn just isn’t that kind of a character. Deadpool has the advantage of a mask, so we get to imagine his smirks and other facial expressions. No such luck here. And as great a performance as Margot Robie gives here, Quinn will never be Deadpool.

After Robie’s spot-on performance, you have to give credit to Ewan McGreggor as Black Mask. He plays the villain to perfection here. Sionis is the only one who doesn’t know he’s in a camp film, and so he plays it well against the hilarity that goes on around him. Rosie Perez is the surprise of the film, as she brings life to Montoya perfectly. I love Mary Elizabeth Winstead, but Huntress just isn’t the part for her. I just couldn’t believe her in the role, and her performance was actually rather distracting. She’s a terrific actress, but this was a bit of bad casting here. Jurnee Smollett-Bell underplays Black Canary quite a bit, so she never gets the chance to completely stand out. I expect it was intended to be a nuanced part that doesn’t really find legs until the climax. Special mention has to be made for Chris Messina, who plays the sadistic henchman Zsasz. The guy’s about as twisted as any bad guy we’ve seen in the DCU. Ella Jay Basco is just cute enough to play our Artful Dodger character, Cassandra Cain. The franchise will have big plans for her, and I can’t wait to see both character and actress evolve over the remaining films of this trilogy.

Yep, you heard correctly. Birds Of Prey is to be part of a DC trilogy that will next feature The Gotham City Sirens, eventually bringing the two groups together in the third film. It’s a strong start, and I enjoyed this far more than I honestly expected to enjoy it. You have to go along with the camp and embrace it, as Quinn naturally does. The film stands in stark contrast to the recent Joker film, and if DC can continue to show new sides of their franchise, there might be hope yet for some kind of satisfying all-inclusive film down the road. I have to admit I was a big fan of the old television series, which did poorly in the ratings but remains a solid part of my own collection. Birds Of Prey without Barbara Gordon as Oracle or Bat Girl isn’t quite making it for me, but when I heard she was slated to be played by Kristen Stewart, I’m quite happy to wait for the character, and hopefully the powers that be come to their senses and get over that chick. “Never call a woman a ‘chick’. I’ll accept ‘broad’, ‘lady’, ‘woman’, and on occasion, ‘bitch’.”

Gino Sassani is a member of the Southeastern Film Critic's Association (SEFCA). He is a film and television critic based in Tampa, Florida. He's also the Senior Editor here at Upcomingdiscs. Gino started reviewing films in the early 1990's as a segment of his local television show Focus. He's an award-winning recording artist for Omega Records. Gino is currently working on his 8th album Merchants & Mercenaries. Gino took over Upcomingdiscs Dec 1, 2008. He works out of a home theater he calls The Reel World. Favorite films: The Godfather, The Godfather Part II, The Body Snatcher (Val Lewton film with Karloff and Lugosi, not the pod people film), Unforgiven, Gladiator, The Lion King, Jaws, Son Of Frankenstein, The Good, The Bad And The Ugly, and Monsters, Inc.
Exclusive Interview With Michael Starr: Director, Writer & Producer Of Cicada Song Playing With Fire (Blu-ray)