Posted in: Disc Reviews by Brent Lorentson on February 11th, 2020 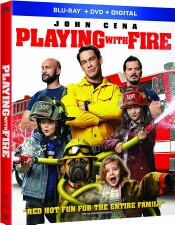 John Cena is following in the footsteps of many wrestlers making the transition to be film actors.  Previously we’ve seen him in Bumblebee and in the comedy Blockers. It’s a good move to attempt to show he’s more than a just wrestler with beefy muscles, but comedy is a tough nut to crack even for the seasoned veterans. With Playing With Fire, we get to see Cena in the role of a smokejumper who leads his team of ragtag misfits into fires by leaping out of helicopters and into the middle of the blaze. Unfortunately, having “Uptown Funk” by Bruno Mars does nothing but take away all the tension of the scene despite all the heroics and danger on display. But really, the opening simply sets the tone for what’s ahead in this film, and it is not necessarily a good thing. When the story gets back to the station, most of the smoke-jumping crew is bailing on Jake Carson (Cena) so they can go fight fires with another crew.  This basically leaves Carson with Mark (Keegan-Michael Key), Rodrigo (John Leguizamo), and Axe (Tyler Mane).  With the smaller smoke-jumper crew, this obviously frees up the film’s budget  and allows for more screen time for the cast that also includes the underused Judy Greer, who is inserted here to be nothing more than a potential love interest for Cena’s character.  The smoke jumpers get a call about a cabin that is on fire, and they go out to check for survivors, and here is where we are introduced to the trio of kids who end up in the care of Carson and his crew.  I get it; this is a movie, but the absurd buffoonery on display in this rescue sequence is troublesome. I mean, they can’t even dump water on a burning cabin, not to mention other issues that go wrong during this rescue, BUT Carson gets a call about this impressive rescue from a high-profile commander.  Yes, there is a lot of logic that will need to be suspended here, and really, it only gets worse.

As for the kids, it doesn’t take long to find out they are siblings who are on the run from the facility they were at because they were concerned they were going to be separated.  This is supposed to help us sympathize about the destructive shenanigans these kids get into, but really it only frustrated me more.  Sadly, the talent that has been put together here has been wasted. Greer is one of the bright spots of the film. She’s giving this role everything she’s got and doesn’t seem to be slacking off just because it’s a kids’ film.  As for Key and Lequizamo, the pair is doing what they can, but they are obviously doing what they can while being restricted within the confines of PG humor.

While I can understand I’m not the target audience for this film, there are still moments where I’m still questioning some of the decisions made, one being the film’s obsession with My Little Pony.  I get the obviously punchline of the joke, but this is something that gets taken to another level, and they continue with it for far too long.

Playing With Fire is presented in the aspect ratio 1.78:1.  The 1080p image is arrived at with an AVC MPEG-4 codec at an average of 30 mbps.  Though this isn’t a film that relies heavily on atmosphere, the Blu-ray presentation of the film looks pretty great.  There is very little noise, and though a majority of the film is inside the smokejumper station, the few night scenes and exteriors offer some impressive black levels.  The detail we get in skin tones, materials, pores, and even facial hair is maybe even too impressive.

The DTS HD-Master Audio 5.1 track is almost as impressive as the picture quality.  Though this is a film that relies on the conversations taking place at the station, the sound design is still impressive.  The surround really doesn’t get to be showcased till we see the smoke-jumpers leave the station to fight fires as well as one of the films climatic moments.  Ambient sound of the chaos of a fire and helicopter rescue really comes through nicely.

Deleted Scenes: (14:43) Most of the scenes here you can understand why they were cut out of the film, either bad jokes or simply scenes that were just padding for the plot.  There is one though with Joe Manganiello that’s at least entertaining.

Bloopers: (2:33) Most of these we see during the end credits of the film.

Story Time With John Cena: (1:27) This is a brief but fun featurette that has Cena doing a brief retelling of the Three Little Pigs story.

Lighting Up the Laughs: (3:05) A Brief behind the scenes featurette.

The Director’s Diaries: (5:05) Really this is my favorite bonus on the disc, it’s members of the cast reading e-mails the director sent them over the course of the film.

What It Means To Be a Family: (4:32) The cast discuss how basically you can make your own family with your friends and peers you surround yourself with.

The Real Smoke jumpers: This is Their Story: (2:34) This is a nice feature that discusses just what a smoke jumper does.  It’s very brief but has footage with real smoke jumpers doing their day to day routine.

This is one where I’m hoping you are making this decision as a parent and it’s something you are considering for your kids.  This is suitable for kids 12 and younger with pretty much nothing offensive about this film. It’s a Nickelodeon-produced film, which pretty much ensures how kid-friendly it is.  As for adults, this one will be a painful one to sit through, so if you need a distraction for the kids, this should do the trick.

Brent Lorentson is a horror writer and film critic based out of Tampa, Florida. With a BA in Digital Film, he co-wrote and co-directed Scavenger Hunt. His short stories have appeared in various horror anthologies. In 2019 his short script Fertile Blood will be a part of the anthology horror film Slumber Party. He is currently working on his first novel A Dark and Secret Place set to be released in late 2019. Favorite Films: Taxi Driver, Fight Club, I Saw the Devil, The Wild Bunch, Dawn of the Dead, A Clockwork Orange, Pulp Fiction, Heathers, The Monster Squad, and High Fidelity.
Birds of Prey: And The Fantabulous Emancipation of One Harley Quinn Doctor Sleep (UHD Blu-ray) (4K)