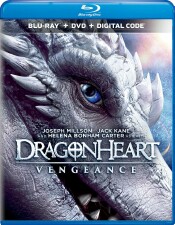 So at what point is enough is enough? The Dragonheart franchise has been around since 1996 when Dennis Quaid and Sean Connery brought the first film to life, becoming a box office success. Since that first film, sequels have continued to tell the tale of how a dragon has the power to share part of its heart with a human if it chooses. This is clearly evidence of the law of diminishing returns, as only the first film made it to the box office, with the others relegated to home media. While home media is a legitimate platform for films, I cannot fathom the reason to keep this franchise going. Dragonheart: Vengeance marks the fifth return to this universe, with the events of this film occurring before the events of the fourth film (Dragonheart: Battle for the Heartfire). Each film exists within the same universe, but with a new crop of characters and sometimes with a new dragon, usually voiced by an acting authority; examples include Patrick Stewart, Ben Kingsley, and of course, Sean Connery. In regards to this universe, I have not ventured back to this world since the events of the first film, and based on what I witnessed in this incarnation, there is little substance to warrant continued trips back.

This film focuses predominantly on the idea of vengeance, specifically revenge, as one of our protagonists (Lukas) witnesses the murder of his family at the hands of four bandits. Bent on seeking the bloodiest justice on the behalf of his loved ones, he attempts to employ a sellsword for the task to little avail, though he does meet one skilled one with some peculiar habits. Running low on options, he is told of a dragon that may grant his heart’s desire. Venturing to its cage, he meets the dragon that agrees to help, but cautions that revenge may change him.

Adamant about his vengeance, Lukas pursues the bandits, eventually joined by the sellsword (Darius) he initially attempted to hire. Darius and Siveth (the dragon) immediately take a disliking to one another, which speaks to prior history with one another. Despite this, the group finds that their simple revenge mission is far more complicated than they thought, as a conspiracy begins to unravel that reaches the high levels of the kingdom.

Helena Bonham Carter voices the dragon (Siveth) this time around, joining the ranks of Kingsley, Stewart, and Connery. This is also marks the addition of a female dragon to the franchise, one with the ability to change her appearance to resemble animals. Another interesting detail is that Siveth is a ice-breathing dragon instead of a fire-breathing one. Production value for the CGI is a bit cheesy, but on par with what you would expect for a B-movie. The central premise for the film is watered down in my opinion. The Lukas character is not filled with the amount of rage that I would have expected in someone who is hell-bent on revenge for his family. In fact, not too long after his family’s tragic death, he is distracted by a local girl. This made the performance inauthentic in my eyes. The idea that one minute he is so eager to track the vandals down and the next he is, as Darius put it, “creepily stalking” the girl does not fit the idea that serves as the main focal point for the film.

This situation could be easily rectified by reshuffling certain events. Lukas witnessing his parents’ death should have come after the introduction of the town girl. Perhaps have him go to town for supplies where he sees the girl and is captivated. Following this, then we could have him happen upon his parents’ execution as he returns home. I believe this would have helped the character reach the proper level of tragedy and anger. As it stands, all it does is make me question his overall commitment to his original cause.

Then there is the subplot involving Siveth and Darius, which feeds into the larger conspiracy. Though this subplot does have more of an emotional arc than the main one, it pulls focus from the storyline involving Lukas, who is introduced as the main protagonist. If it weren’t for the conspiracy angle tying them both together, I would say that this subplot should have been the main focus, though more detail into the Siveth and Darius relationship was needed. It was explained adequately, but more detail would have made a difference.

All in all, the film didn’t deliver a story on the same level with its chosen theme. As I said, much of this could have been achieved with a couple of tweaks, along with a more visceral performance from our lead. As such, I don’t see Dragonheart Vengeance returning the franchise to its former glory. Additionally, I see no cause to keep it going.

Jeremy Butler is a film school graduate of the International Academy of Design and Technology. He is been writing for Upcomingdiscs since 2012; however, movies have played a big part of his life for much longer. Favorite genres include horror, science fiction/fantasy, and comedy. Favorite movies are V for Vendetta, Boondocks Saints, Kiss Kiss Bang Bang, and The Godfather.
ZZ Top: That Little Ol’ Band From Texas (Blu-ray) Dark Waters (Blu-ray)