Posted in: Disc Reviews by Jeremy Butler on March 6th, 2020 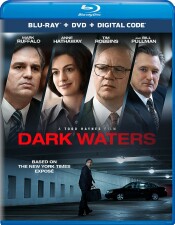 “The system is rigged. They want us to believe that it’ll protect us, but that’s a lie. We protect us. We do. Nobody else. Not the companies, not the scientists, not the government. Us.”

Dark Waters is an alarming, based-on-true-events thriller that will have you more than little worried about your cookware. Mark Ruffalo plays Robert Bilott, an attorney who is drawn into a conspiracy involving a chemical conglomerate that resulted in hundreds of unexplained deaths. Anne Hathaway is his wife, who has to endure her husband’s over-twenty-year obsession with bringing down this company, all while trying to hold their family together. As I said, this was truly illuminating movie based on the 2016 New York Times article, The lawyer who became Dupont’s worst nightmare. The idea that something like this could happen for so long without any real consequences makes this story worth telling.

Robert Bilott is a corporate defense attorney and partner at his firm. He is married with a baby, and he seems to have his life and career trajectory well in hand. That is, until an acquaintance of his grandmother shows up at his office unannounced, demanding his help suing a chemical company for the deaths of his cows. Robert initially wants nothing to do with the situation and is unconvinced that there is even a case to be made until he travels Parkersburg, VA and sees the devastation firsthand. Soon he finds himself caught up in a long-running conspiracy with life-threatening consequences and the involvement of one of the world’s largest companies that has been making billions as a result.

I didn’t know what to expect going into this movie, but I was floored by the revelations of it. I must confess that I had no idea that something like this was going on, and I am eternally grateful to this film for opening my eyes. What is more shocking is the fact that it took well over twenty years for DuPont to be brought to some kind of justice. In my opinion, the penalty should have been far worse, but that is just a byproduct of the world we live in. Moving on, the film can drag in some areas, but for the most part I was entertained throughout.

The story focuses primarily on Bilott, who wages basically a one-man war against this commercial giant that uses every dirty trick in the book to keep the truth from being discovered. Ruffalo is great in the role, showing the character’s dedication to the cause, though it does take a toll on his marriage and relationship with his children. Ruffalo also brings a number of nervous tics that make the character more authentic and endearing. I’m not sure if they are quirks of the actual Bilott or an invention of his, but they help make the character relatable, making him an everyman. He isn’t a superhero, but what he accomplished was nothing less than superhuman.

Hathaway is good in her supporting role despite her role in the film being minimal in the first half. We get more engagement with her towards the second half of the film, including two key scenes where she scolds her husband for his neglect and another where she is his biggest champion. Back on the subject of Ruffalo, there was one sequence that seems out of place in the film. Following a disposition, Bilott slips into momentary paranoia and fear over what DuPont may try to do to him. This felt out of place, as there was no indication of that kind of action anywhere else in the film.

There is one other member of the cast with mentioning, Bill Pullman. He didn’t make an appearance until well into the film, and by that time I had forgot that he was even going to be in the movie, but he made his presence known when he appeared, specifically in a courtroom scene where is destroys a witness’s credibility during cross-examination.

Dark Waters is presented in its original aspect ratio of 2.39:1. The 1080p image is arrived at with an AVC MPEG-4 codec at an average 30-35 mbps. The high-definition image presentation does a wonderful job of showing the contrast between the two main locations. The use of texture and color temperature makes it very easy to know where the characters are. The Ohio big city locations are clean and even glossy at times. The colors are warm with a lot of yellows and oranges. The West Virginia small town is by contrast cold with heavy blues. The environments are also more stark and dirty. These differences also accent the mood of the places and the contrasting cultures. Black levels are pretty solid with some rather nice black levels, particularly in the West Virginia locations.

The DTS-HD Master Audio 5.1 doesn’t need to be all that dynamic. The audio presentation is mostly there to serve the dialog, and all of that comes through rather crisp and clean. The score is appropriately subdued. The surrounds are mostly there to help with a sense of place and location.

Uncovering Dark Waters: (5:38) This short behind-the-scenes feature focuses on the true story and how Mark Ruffalo became involved and his conversations with the real guy who also offers his insights. There’s a little on the director and the shooting locations.

The Cost Of Being A Hero: (5:01) More production footage with the focus on the theme of the little-guy hero. Cast and crew all offer their own insights.

The Real People: (2:28) Some of the actual participants were part of the production and given cameos in the film. Those people and moments are explored here.

Dark Waters is definitely a must-see movie, if for nothing more than as a public service announcement. The story is compelling and extremely well delivered by its talented cast. I encourage fans of legal dramas to see this film.

Jeremy Butler is a film school graduate of the International Academy of Design and Technology. He is been writing for Upcomingdiscs since 2012; however, movies have played a big part of his life for much longer. Favorite genres include horror, science fiction/fantasy, and comedy. Favorite movies are V for Vendetta, Boondocks Saints, Kiss Kiss Bang Bang, and The Godfather.
Dragonheart: Vengeance The Way Back