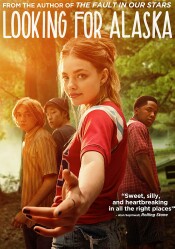 “If you take Alaska’s genetic code, add her life experiences, and relationships she had with people, and then you take the size and shape of her body, you do not get her.”

First impressions were that this was an experience that could by shared with my daughter. However, it wasn’t long before she found herself sent away due to the mature nature of the content. Little did I know that this series was Hulu’s answer to Netflix’s 13 Reasons Why. That said, though there are clear correlations between the two properties, such as they are both based on popular novels and cover highly emotional and serious topics such as suicide and the importance of connection with people. Looking for Alaska manages to infuse some levity into its plot. This inclusion goes a long way towards solidifying the limited series’ (as I understand it, there are no plans for another season) individuality and providing an enjoyable balance to what comes to a somber conclusion.

“If people were rain, I was drizzle and she was hurricane.”

That is poetry if I ever heard it. Based on the popular first novel from John Green, also the writer for The Fault Between the Stars, Looking for Alaska follows Miles “Pudge” Halter, a young man with a fascination with learning famous people’s last words, as he transfers to the Culver Creek boarding school in Alabama, in search of his own “Great Perhaps”. I know what you are thinking: the name Pudge paints the picture of a hefty gentleman; however, Miles is quite the opposite, and the nickname comes from his roommate, Chip “The Colonel” Martin. Almost immediately, Miles finds himself in the middle of a war between the “Weekday Warriors,” a group of wealthy students who are permitted to return to their homes on the weekends, and the Colonel and his group. Additionally, he meets and falls for Alaska Young, a beautiful and complicated girl.

Over eight episodes the war between the two groups is explored with both sides going too far, which ultimately leads to serious consequences, and the connection between Miles and Alaska suffers many twist and turns, as the two are unable to fight their feelings. In addition to this relationship, the friendship between Chip and Alaska is severely tested, as these once best friends find themselves at odds on more than one occasion. With all this occurring, tragedy is just around the corner.

Let start by saying that, yes, I did feel a real 13 Reasons vibe while watching this series, but when you consider the fact that the novel this series is based on is two years older than the novel that the Netflix series is based on, you can gain the necessary separation from that pitfall. Additionally, though this story also highlights a tragedy, it is not as dark as the aforementioned series. Further establishing the difference between the two, the previously mentioned infusion of levity. This is based on the small part thanks to the Colonel character, who is brilliantly played by Denny Love, who provides a majority of the comic relief for the series. He is quick-witted and in possession of excellent comedic timing even the darkest of moments. This is presented when during a grief counseling session that he questions the Almighty about taking his friend and allowing another student to remain after she makes a vapid and stupid comment. Not many would be able to pull off such a thing in that moment, but he does, and it made me smile.  As he puts it, he is both classy and sensible. However, his crowning moment is without question is his downward spiral from nicotine withdrawal. It is something that has to be seen to truly appreciate.

Love’s contributions aside, the central focus of the series is on Charlie Plummer’s Pudge, who serves as the show’s narrator. He is our window into this world and provides the fresh-eyed perspective that is needed to truly bring us into this world. However, the heart of the show is its namesake, Alaska Young, played by Kristine Froseth, who manages to balance the much-needed free-spiritedness of the character, while also hinting at the dark past that haunts her. Episode 3 (I’ve Never Felt Better…) is the best of example of this as we witness her emotional turmoil over potentially being expelled. Before this moment, we had only glimpsed how tragic her life outside Culver Creek was. The connection between Pudge and Alaska is also an important factor that I could possibly be resonant of the tragic love that existed in the most famous Shakespeare story. Two people with obvious feelings for one another, but circumstances prevent them from being together. Their chemistry and feelings are presented in the very first episode when they philosophy about the “Labyrinth of Suffering,” until the final episode when Pudge is finally able to answer the question that she presented to him in the first episode, “How do I get out of this Labyrinth?”

As previously mentioned, I know of no plans to continue this series, and based on my own research it is unlikely to return given that it was billed as a limited series. Despite this, I found it to be a series of significant impact and worth watching. I highly recommend it if you are a fan of tragedies. True there is heartbreak, and we are aware of this eventuality very earlier on. The levity goes a long way, as well as the connection of the cast towards establishing this as a worthwhile experience.

Jeremy Butler is a film school graduate of the International Academy of Design and Technology. He is been writing for Upcomingdiscs since 2012; however, movies have played a big part of his life for much longer. Favorite genres include horror, science fiction/fantasy, and comedy. Favorite movies are V for Vendetta, Boondocks Saints, Kiss Kiss Bang Bang, and The Godfather.
The Gentlemen (UHD Blu-ray) (4K) Paramount Presents: King Creole, Fatal Attraction & To Catch A Thief