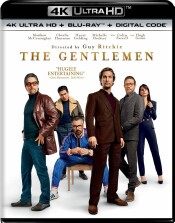 “If you wish to be the king of the jungle, it’s not enough to act like a king. You must be The King. And there can be no doubt. Because doubt causes chaos and one’s own demise.”

After the horrific attempt at King Arthur, Guy Ritchie was dead to me. His films have always been more style than substance, but there have been moments when that style really told a story and told it well. Of course, I’m talking about films like Lock Stock & Two Smoking Barrels. That was just a fun film to watch. King Arthur wasn’t fun to watch. So when The Gentlemen showed up on my doorstep in UHD to be reviewed, it was a roll of the dice for me. Which version of Ritchie was going to show up? Fortunately, it was the brilliant filmmaker who knows his strengths as well as the strengths of his cast and plays completely to those strengths. And with a few irritating flaws, this was the kind of film I’ve been waiting for from the director for several years. Universal has released it on a rather nice UHD Blu-ray (4K) release, and it should be a fun night of action for anyone who gets their hands on it.

The film starts with a rather mysterious and violent scene involving a ponderous Matthew McConaughey as pot kingpin Michael Pearson. It’s one of those start-in-the-middle scenes that leaves you with a ton of questions that will likely be answered as the film progresses. It’s basically a setup. The real story begins when Pearson’s right hand man, Ray (Hunnam) is walking into his home only to be confronted by Hugh Grant’s whimsical Fletcher. Fletcher believes he has a payoff of 20 million pounds coming his way in order to keep him quiet. He’s a top stringer for a British tabloid run by Big Dave, played by Ray Donovan’s excellent Eddie Marsan. Big Dave is pissed because Pearson once refused to shake his hand and has had Fletcher build a hit piece as revenge. Of course, Fletcher figures he can get more money not to print the story. It is through his narrative in that Ritchie trademark flashback style that most of the film unravels.

Pearson was trying to get out of the business and has settled on a price of 400 million to a buyer who will take over his empire. But as word gets out that he’s trying to get out, there is weakness sensed, and a plethora of players in a rather complicated relationship of characters and situations tries to pounce on the void that has been detected. Those characters include Henry Golding as Dry Eye, an Asian gangster who sees the opening as a chance to move up in line in his own gang. Meanwhile, Colin Farrell plays a gym owner who finds himself in a jam when his own guys take down one of Pearson’s secret operations. Coach wants Pearson to know it was not his intent and find a way to make it up to him, which ends up putting the film’s only honest character in the worst situations that require unwanted choices.

That’s a quick peek at the plot. Now forget all of that, because it doesn’t matter. You’re not going to watch this film for any of the story points. What you are going to watch is a grand collection of actors putting on a thespian clinic in what amount to a series of related vignettes. But it’s these performances that make every second of the film. I’m not a fan of Charlie Hunnam, and while I loved Sons Of Anarchy, I considered him the weakest link in the series. His recent film performances including the aforementioned King Arthur farce hasn’t brought him any more forward in my assessment of his abilities. He’s horrible. But somehow Ritchie got the performance of Hunnam’s career in this film. There’s not a weak link in the cast. I’ve always thought about how Hugh Grant was going to get by when time took away his looks and charm. It wasn’t really looking too good of late, but again here’s another mediocre actor who delivers the performance of his career. He has to drive the story, since most of it is being told by Fletcher, and gosh darn it if he isn’t absolutely compelling. Matthew McConaughey pretty much delivers his thoughtful pearls of wisdom like he’s trying to sell the car he’s driving. Wait a minute… That’s pretty much what is asked of him, and it’s exactly what he delivers. No real surprise there. Downton Abbey fans will delight in seeing Michelle Dockery as Pearson’s wife. Turns out she can shoot and cuss with the boys and hold her own even if she’s a bit underused here. Ritchie hasn’t really been good at fleshing out female roles, but he comes closest here. She makes the best of the scenery she has and is a wonderful fit all around. Colin Farrell is almost the comic relief, although much of the film plays for a few laughs. You end up really feeling for the guy, and he’s kind of the hero of the film in my mind.

The Gentlemen is presented in its original aspect ratio of 2.39:1. The ultra-high-definition 2160p  image is arrived at by an HEVC codec with an impressive average bitrate of 65-70 mbps. Not surprisingly this is a deeply moody and atmospheric film. Much of the story is played out in dimly lit locations where the story spins itself a nice little web of film-noir-like essence. The HDR allows for that nice mellow lighting to cut through. Nothing is lost in those shadows, and they stand in wonderful contrast to source lighting. This comes from a wonderful 4K intermediate that makes it look close to filmic in quality and texture. Without actual grain, there is a somewhat organic feel here that comes alive in those textures and details. Colors are often dull because of the atmosphere, but when the characters do come out into the light, the colors are natural and vivid. I was most taken by the shots of wood grain in the film. I think that’s where the organic aspect comes from, and it truly makes the film stand out. Black levels are perfect with plenty of nice shadow definition.

The Atmos track defaults to a nice 7.1 mix. The film is actually rather quiet throughout. Yes, there are action scenes where the surrounds come alive and you get plenty of ear candy. But mostly the surrounds carry a touch of the score and often subtle effects to make the locations sound authentic. Dialog is really what’s important here, and it’s done to perfection. The subs don’t ever dominate even during the action, but they do provide a nice depth to it all including the dialog.

The extras are on both Blu-ray and UHD discs. The UHD extras are in 4K but not HDR, and they are quite minimal and somewhat disappointing.

Best Gentlemanly Quips: (3:09) Just a collection of some of the witty dialog.

Glossary Of Cannibis: (:49) really just a collection of the various words used in the film to describe pot.

Behind The Scenes On The Gentlemen: (1:36) If you look at the running time, you know this is nothing more than a film promo.

More than anything else The Gentlemen is a fun film and gives you a wonderful couple of hours of stylish escapism. It stands out to me entirely for the performances and some surprisingly good stuff that I never saw coming. This might well be my favorite Guy Ritchie film ever, and so that means I’ll have to sit through 10 more years of crap or average stuff before he does it again. It might just wash away the stain of that King Arthur heist farce that I still can’t get out of my head. “You really can’t unsee it once you’ve seen it.”

Gino Sassani is a member of the Southeastern Film Critic's Association (SEFCA). He is a film and television critic based in Tampa, Florida. He's also the Senior Editor here at Upcomingdiscs. Gino started reviewing films in the early 1990's as a segment of his local television show Focus. He's an award-winning recording artist for Omega Records. Gino is currently working on his 8th album Merchants & Mercenaries. Gino took over Upcomingdiscs Dec 1, 2008. He works out of a home theater he calls The Reel World. Favorite films: The Godfather, The Godfather Part II, The Body Snatcher (Val Lewton film with Karloff and Lugosi, not the pod people film), Unforgiven, Gladiator, The Lion King, Jaws, Son Of Frankenstein, The Good, The Bad And The Ugly, and Monsters, Inc.
Police Squad: The Complete Series (Blu-ray) Looking For Alaska