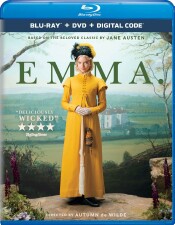 Jane Austen is a novelist from the 18th century whose novels continue to stand the test of time; though she gained prominence during her lifetime, I would dare say that she has become very fashionable, with many of her novels being required learning for most schools or at the very least on the summer reading list. Her credits include Sense and Sensibility, Pride and Prejudice, and Mansfield Park; however, the novel that serves as the basis for the film we are reviewing today may be her most famous work, Emma. This property is no stranger to adaptation, having been adapted in the form of a 1996 television film starring Kate Beckinsale, as well as that same year into a theatrical film starring Gwyneth Paltrow. This time around, the film stars Anya Taylor-Joy in the titular role. Though this is not the film I was hoping to see Taylor-Joy in this year (this is my subtle ploy to demand the release of The New Mutants), I must admit that she does a fine job of taking on the role that has already been tackled by top talent. Granted, this is not the type of movie that I am normally drawn to; it is my wife’s bread and butter, so naturally it was an experience that we shared. Basically a period piece romantic comedy, as anticipated it was a big hit with her, and fortunately there was some humor for me to appreciate as well.

Emma Woodhouse is an affluent young woman, who after her governess weds, believing she bears some responsibility for the union, imagines herself a matchmaker. Despite the objections of her father (Bill  Nighy), she attempts to find a suitable match for her latest governess, Harriet Smith (Mia Goth). This proves to be quite an undertaking as her matches prove a number of times to be unsuccessful for a number of reasons, including a social mismatching, as well as them having eyes for another (i.e. Emma herself). During this period, she also encounters Mr. Knightly (Johnny Flynn), a kind and compassionate person for whom she begins developing feelings; however, her affections may have competition in the form of the very woman she is attempting to set up.

When it comes to remaining faithful to its source material, I would give the film a A in that regard, as it does remain true to the novel as well as the 1996 theatrical film, which was also fairly faithful to the novel. The fact that the film requires so little deviation shows the material’s ability to stand the test of time. My wife was enamored with the movie since before the opening credits, so I urge you to take that into the account of her objectivity. In her defense, she apparently saw the Paltrow version and was quite fond of it, and was pleased that the story maintained its authenticity. She did have one particularly helpful note: she felt that Anya Taylor-Joy’s performance, particularly her mannerisms, were better suited for the character than Paltrow’s version. Memories of Paltrow’s performance are a bit vague given the passing years, but I can comment that I found my wife’s assessment to have validity. Taylor-Joy’s speech and composure appeared completely comfortable in the role, and she conducted herself in a manner that was thoroughly convincing. In fact, I have no doubt of her ability to assimilate into that time period if possible.

Authenticity was a big thing in this film in my opinion, all the way down to the outfits. I know it was not meant to be funny, but the idea of everyday attire back then was a great source of comedy for me. In regards to the actual humor of the film, I found it on par for what I expected for a British comedy, which relies more on subtlety than physicality. Of course, the comedy of it lies mainly in Emma’s attempts to pair Harriet off, which all are to no avail. It requires some focus to keep up with who is pairing off with who, and the two big twist that comes towards the end of the film, the one that was expected to be a devasting blow to one character, but actually acted as the catalyst for the twist that resulted in a potential devasting blow to another character. It is all very drama-filled, but it was around this time that the film become the most interesting for me, because it required a decision on the part of our titular character that would define her development.

Though not traditionally my type of film, I found this adaptation of the Austen novel to be enjoyable. There was a decent level of intrigue, and the performances were authentic and faithful to the stories that came before it. I dare say that Jane Austen would be proud to see her creation withstanding the test of time, as I anticipate that it will continue to do for many future generations.

Jeremy Butler is a film school graduate of the International Academy of Design and Technology. He is been writing for Upcomingdiscs since 2012; however, movies have played a big part of his life for much longer. Favorite genres include horror, science fiction/fantasy, and comedy. Favorite movies are V for Vendetta, Boondocks Saints, Kiss Kiss Bang Bang, and The Godfather.
Top Gun (UHD Blu-ray) (4K) Days of Thunder ( UHD Blu-ray) (4K)