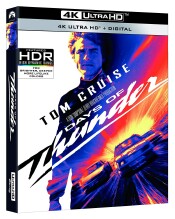 Back in 1986 a young Tom Cruise teamed with director Tony Scott for Top Gun. The film ended up pulling in over $170 million. A sequel appeared out of the question, but that wasn’t going to stop this box office dynamic duo from figuring something out. They decided to just refilm Top Gun. So, if jets go fast, what else goes fast? Before long someone realized that racing cars go fast. So, before you know it Tom Cruise was once again teaming with Tony Scott as a cocky young upstart, this time in the race game. If you watch the two films back to back, the code really isn’t that hard to break. All of the same plot points and beats are exactly the same, just in a new environment. The public wasn’t fooled then; the film took in less than half what Top Gun brought. You shouldn’t be fooled now. Days Of Thunder is Top Gun redux.

The retread plot is simple. Lt. Pete Mitchell…oops….I mean Cole Trickle (Cruise) is a driver looking for a car. Tim Daland (Quaid) is an owner without a car or a driver. Hell, he doesn’t even have a mechanic. First he must talk car engineer Harry Hogge (Duvall) out of retirement to build him a winning NASCAR racer. He figures if he can hook up Cole and Harry, he’ll have a winning combination. Unfortunately, they don’t take too well to each other at first. Of course, Cole is a bit of an egomaniac when it comes to racing. Harry has to teach him how to hone his natural skills with better judgment and patience. They finally bond and start to win some races. Cole’s rival on the track is equally cocky Iceman…. oops, I mean Rowdy Burns (Rooker). Their cat-and-mouse games on the track are close to getting them both in hot water with the NASCAR commissioner Big John (Thompson). The two end up in a serious wreck and in beds at the same hospital in Daytona, where they happened to be looked after by Dr. Charlie….oops, I mean Claire Lewicki (Kidman). Claire is holding up their certification to get back on the track. Cole, of course, falls for the young doc, and she, for some reason no one could understand, falls for him and puts up with his nonsense. The problem here is that Rowdy’s in worse shape than he thought and needs surgery to save his life. That means missing Daytona. At the same time Cole is being pushed out by the new driver on his team, Goose…oops, I mean Russ Wheeler (Elwes). Looks like he needs a new car, and Rowdy needs a new driver. What a coincidence. The film ends with the dramatic, euphemism for predictable, race at the Daytona 500.

I get to actually drive by the Daytona Speedway sometimes in the summer on my way to a Reptile Expo in Daytona. I’m not a NASCAR fan, but every time I drive by the place, it makes you look in awe anyway. It’s always had a special place in racing history, and since the death of Dale Earnhardt, it has become almost a temple where the faithful come to worship. Here they hold their High Holidays every February. So it’s really not bad timing. The film is coming out just in time for the annual goings-on at the track. While I consider this a basic retread of Top Gun, I have to say I enjoyed the cast a little more in this film. Robert Duvall is always a pleasure to watch, whatever the heck he ends up doing. While he never develops the required screen chemistry with Cruise, it really works on the same level as the characters, so I get it. When it comes to chemistry, however, Cruise does develop pretty good vibes with Nicole Kidman. It was in this film that their relationship and ultimately failed marriage began. I’m not really much of a sucker for romantic films or moments, but it is clear in this film that there’s somewhat of a spark there. Kidman, for herself, does an OK job, but looks way too young for the part. Quaid offers more than his usual comic relief here. The part is meaty, and he shows some chops beyond what he is most known for here. The racing scenes are a bit unrealistic to me. I have seen my fair share of races, and there just isn’t that much bumping and scraping going on. Duvall’s character calls that racing, but I’m sure real NASCAR drivers would call that reckless. These guys know they’re putting their lives on the line each time they get into a racecar. That doesn’t mean they’d stand for unnecessary risk. Drivers like Rowdy, Cole, and Russ would be ostracized by the entire racing community. There is a decided difference between dangerous and reckless.

Days Of Thunder is presented in its original aspect ratio of 2.39:1. The ultra-high-definition 2160p  image is arrived at by an HEVC codec with an impressive average bitrate of 60-65 mbps. The good news is that colors fly like the cars around the track. The reds, greens, and yellows of many of the cars really shine, likely in a way they haven’t since 1990 on the big screen. Flesh tones are pretty natural, and black levels are about average. The original grain is retained, but I couldn’t help but notice some other noise on the transfer. That’s the bad news. The long shots just appear soft to me, and that could be part of how they were shot. It doesn’t help that a lot of the racing footage also uses real track footage that likely wasn’t shot on film and so fails to maintain the native 4K advantage. While filmed five years after Top Gun, this film feels far more dated in the way it looks. It’s the best you are going to get. That much I’d say you can count on.

The Dolby TrueHD 5.1 track is lively, to say the least. The race cars zoom around the track with plenty of oomph. I’m a bit disappointed that there wasn’t more sub here, however. Surrounds work well enough that you can put yourself there at the races. The cars definitely appear to have movement in the room, so I’d call this a solid surround mix. Dialog is there to be heard. There are moments while a driver is talking during a race that you might struggle to hear every word, but that’s just realistic. The Hans Zimmer score is not one of his best. It suffers actually from having a more dynamic presentation. It is heavy on synth and sounds like an 80’s B horror film at times. I’m a huge fan of Zimmer’s, counting the Gladiator score as one of the best ever. This just isn’t his best work. I also hoped for an Atmos transfer, but this film didn’t get quite the love of the other two.

The Blu-ray copy has no extras, while the UHD features one of those Filmmaker Focus 6-minute features found on the new Paramount Selects library.

Maybe the diehard racing fans see more in this film than I ever will. For me its only saving grace is the cast, and I’m not talking about Tom Cruise. Tony Scott was a wonderful director, but he phoned this one in. The race scenes are uninspiring to say the least. He never pushes any boundaries during the film. Never once does a camera angle or framing device draw us further into the action. You can see better racing footage watching ESPN. I suppose some of the crashes are pretty exciting, and I’m told that’s why a number of folks watch racing live. That sounds a bit sick to me, and maybe Scott was wrong hoping to appeal to those folks here. After all, they know no one is actually getting hurt. What fun can there be in that?  Fast cars are the appeal of this film. “They call that a dog and pony show.”

Gino Sassani is a member of the Southeastern Film Critic's Association (SEFCA). He is a film and television critic based in Tampa, Florida. He's also the Senior Editor here at Upcomingdiscs. Gino started reviewing films in the early 1990's as a segment of his local television show Focus. He's an award-winning recording artist for Omega Records. Gino is currently working on his 8th album Merchants & Mercenaries. Gino took over Upcomingdiscs Dec 1, 2008. He works out of a home theater he calls The Reel World. Favorite films: The Godfather, The Godfather Part II, The Body Snatcher (Val Lewton film with Karloff and Lugosi, not the pod people film), Unforgiven, Gladiator, The Lion King, Jaws, Son Of Frankenstein, The Good, The Bad And The Ugly, and Monsters, Inc.
Emma. (Blu-ray) The Invisible Man (2020) (UHD Blu-ray) (4K)