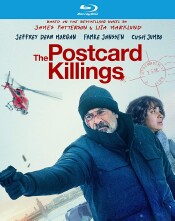 I do believe that this film was deserving of a theatrical release. I don’t think it would have been a box office hit, but it deserved to reach a wider audience. That is not to disparage home media, which I’ve been plenty thankful for the many hours of entertainment that it has provided me given the state of affairs lately. Jeffrey Dean Morgan stars in this film based off a book from crime writer, James Patterson and Swedish journalist/crime writer Liza Marklund. The background of this collaboration was a particular interest to me, as the two reportedly corresponding back and forth via email, with Marklund writing the first draft and Patterson doing the second draft. Both are established crime writers and their decision to co-author a book together is a clear example of their respect for one another’s contribution to the field. Thanks to this mutual, a book that served as the basis of this adaptation, got off to the right start. Joining Morgan is the Good Fight’s Cush Jumbo as well as Taken’s Famke Janssen. I swear I am not trying to give you a history lesson, but the origins of this film is very interesting in my opinion, as it spent several years in what is known as development hell (media jargon for a project that spends a long time in the development phase, usually resulting in changing of production crews, scripts and actors dropping in and out of the project), and was originally slated for Patrick Dempsey in the lead role and Dakota Fanning in the supporting, which then changed to Britt Robertson in the supporting role that eventually went to Jumbo. Truth be told, I think that this situation worked out for the best, as well I can’t imagine someone else doing the role of Jake Kanon the justice that Morgan did.

When his daughter and her husband are murdered on their honeymoon, NYPD Detective Jake Kanon travels across to Europe to find her killer and bring them to justice. In a foreign land with no authority, he finds that the investigating officers are not keen to share information with an American, who they believe is likely out for revenge. Unwavering, Kanon continues to investigate on his own, making headway despite being impeded at nearly every turn. With limited resources, he is able to determine that the killer’s modus operandi is not that of an amateur but a skilled and meticulous killer. Not only does this killer leave no forensic evidence, the manner in which he poses his victims, the killer has a daring way of announcing the message behind the murders: a postcard.

Yes, a postcard. A postcard is sent to an unsuspecting journalist; the killer’s method of announcing his arrival in a new country. Taking advantage, the freedom of movement offered in Europe, it is near impossible to track the killer. The flagrant manner of the killer, only further spurs Kanon’s determination to catch him. Though initially locked out of the investigation, Kanon manages to prove his worth to the taskforce and with the help of a sympathetic detective is formally asked to assist. To that end, he partners with the journalist that receives the postcard in order to determine the killer’s message and stop him.

I really enjoyed on this story unfolded; it was like a good book. We are brought into the action from the beginning, as the murder of Kanon’s daughter occurs in the opening scene and then next we are introduced to him as he identifies her body. Following this, we watch him downward spiral, as I imagine any parent would. Of course, this truly impressive bender did send the wrong message at first as it gave the impression of the character being a drunk. Based on everything I’ve seen; it was all evidence to the contrary. However, as I said this can easily be brushed off as grief. There is a bit of a dual perspective to the story as we follow both Kanon as well as the killer. This can be a risky move, but the film made this work for them. In fact, it resulted in a pretty good twist later on down the road. I have to admit that without giving too much away, that I was through for a legit loop by this. It turned what I knew on its head, this is resonant of a good crime novel, where something you are sure about ultimately is revealed not to be the case.

In regards to performance, as previously stated, I believe the role of Jake Kanon could not have been done better than what Jeffery Dean Morgan did. As he despairs about his daughter, you are drawn in and you feel for this man. Then when commits to find the parties responsible, it is as though he is barely holding on. Even so, he still composes himself in the proper manner. He is defiant of the investigators at every turn and clearly fueled by his emotions, but he is still damn good at his job and very analytical. He was everything that I would expect of a thirty-year veteran of the police force. Also, to his credit, despite the utter depression that he is clearly feeling, he is still a emotional bedrock for his ex-wife (Janssen), manages to get the odd funny quip in there every now in then. Look out for his commentary regarding herring.

The killer’s motivation was also intriguing. I do not want to give too much away, as I very much want the audience to enjoy this story. What I will say is I was surprised by the killer’s identity, as well as his motivations. Both incidents proved separate twist to the overall story, thereby making this a true thriller. The ending is a bit fantastical, but I can forgive it I suppose.

I very much recommend his movie to fans of crime fiction and thrillers. Going in, the best I had hoped for was to be entertained and it delivered so much more; I was intrigued and engulfed in the story. This film was basically a good book to me, which given its origins makes me believe that the film did the book justice.

Jeremy Butler is a film school graduate of the International Academy of Design and Technology. He is been writing for Upcomingdiscs since 2012; however, movies have played a big part of his life for much longer. Favorite genres include horror, science fiction/fantasy, and comedy. Favorite movies are V for Vendetta, Boondocks Saints, Kiss Kiss Bang Bang, and The Godfather.
The Deer Hunter (UHD Blu-ray) (4K) The Good Place: The Complete Series (Collector’s Edition) (Blu-ray)