Posted in: Disc Reviews by Brent Lorentson on June 2nd, 2020 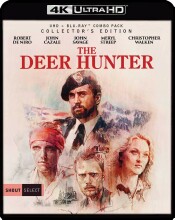 When it comes to picking “the greatest Vietnam War film” it’s one of those arguments that can get pretty heated with fans of cinema.  Platoon, Apocalypse Now, and The Deer Hunter are typically the three I tend to hear named the most, as for me it has always been The Deer Hunter, not just because of its intense portrayal of the war but because of the journey it sets us on, a journey so profound I can easily say it’s one of the best films ever made.  I don’t feel like I’m saying anything bold after all it did win Best Picture in 1978 as well as several other Oscars that year.  It’s a film though that every time I sit down and watch it, the experience manages to impact me in a way I’m never quite ready for.  I first saw it when I was a teenager, didn’t know anything other than it had Robert De Niro and Christopher Walken, I didn’t know what to expect and by the time it ended I was floored.  Everything from the visual scope of the film, the intensity of the violence, the performances, I was maybe 14 and didn’t quite have a grasp for what epic cinema could be  but after watching The Deer Hunter it became the film I’d hold others up to this standard.  It is now decades later and Shout Factory has gone through the process of restoring the film and released it in 4K, how does it hold up after all this time?

The film is just a few minutes over three hours but it feels longer, most of the time this is a bad thing and I don’t mean to say that the film drags or is boring; instead this is a film that takes you on an emotional and epic journey.  The film opens up as we see a group of friends that work together at the town’s steel mill, they’re your average blue collar guys though three of them are about to head off to fight in the Vietnam War. Steven (John Savage) is getting married, and a good portion of the film revolves around this wedding that is also doubling as a fair well to Nick (Christopher Walken) and Michael (Robert De Niro), the three men are going to be leaving together.  The wedding sets up the dynamic of the relationships these men have together and for their friends and loved ones that they’ll be leaving behind.  The relationship that’s most unique is a love triangle between Nick and Michael as they are both in love with Linda (Meryl Streep) and she seems to love both men but it seems Nick simply beat Michael to the punch.  What’s most impressive about this relationship and a nod to the performances given by these actors is how much expressed about this relationship the three have without very little dialogue but instead their expressions and body language that director Michael Cimino is able to beautifully capture.  To linger on the topic of the wedding sequence  of this film and simply how big it is in scale and film length, I believe only The Godfather can surpass its grand scale, though The Deer Hunter aims for a more grounded Russian Catholic celebration.

The film then shifts gears as Michael and Nick set off with their friends to take a hunting trip while Steve embarks on his honeymoon.  Here is where we really get to see a bit of whom Michael really is and an understanding how he feels about “the hunt”.  We get to see two hunts in the film that mostly bookend the Vietnam portion of the film and personally they are my favorite portions of the film.  While we get to see a clear transition in character with Michael it’s interesting to see how it seems all his friends have remained the same, it’s that second hunt where we really get a glimpse at how much the war has changed Michael despite him coming home relatively physically unharmed.

This brings me to the Vietnam portion of the film, for those that have already seen the film you know how intense this portion of the film is and for those of you that haven’t seen it you’re in for an intense ride.  I’m not going to get into much detail other than to say we witness Michael, Steven and Nick go through a horrific experience that profoundly changes these men for the duration of the film.  The first time I saw this sequence I was a bit shell shocked by it and as I’ve revisited the film over the years it continues to make an impact as I sometimes ponder how I would have fared if I were in their position.  The rawness of the performances and how the scenes have very few cuts and how the moments just linger are simply nerve wrecking and it’s no wonder the film got an Oscar for Best Film Editing.

When Michael comes home, just when you think you have this movie figured out it takes us into some surprising and emotional directions.  For a film that at times seems so epic with its characters journey it remains very intimate and profound.  This is one of those performances that upon rewatching you are reminded just how great of an actor Robert De Niro was and how badly I wish he still had that spark. Christopher Walken, John Savage, John Cazale, and Meryl Streep all deliver some of their best performances here they each make their characters feel so grounded as though they all really came out of this small Pennsylvania town.

The Deer Hunter is presented in a slightly altered 2.35:1 as opposed to its original aspect ratio of 2.39:1. Before I talk about how good the film looks I do have one major complaint here. The use of DNR to eliminate much of the film’s original grain is serious flaw and robs the audience of having the full experience of the film. Let’s be honest here. The atmosphere of this era and these places is the film’s strongest value. The authenticity is the experience both visceral and raw these wonderful actors are placed in a critically detailed environment and while most modern viewers consider the grain as noise or a distraction it is an organic element of the film as everything else. That said the ultra high definition image presentation does deliver in many ways. The colors have a nice saturation that is also a product of the film stock of the time. We’re talking a native 4K source that retains the deep colors. The film is dark even in well-lit areas like the wedding reception. The boost of the HDR allows detail to come through these warm colors with heavy tints of yellow and orange. Outside colors turn appropriately cold during their trip to the mountains. I was very pleased to see that those amazing mountain vistas are as grand and beautiful as they have always been. Throughout the film it’s going to be that shadow definition that delivers so much of that detail. The sharper resolution reveals some obvious dated make-up f/x and the blood during the various lost rounds of Russian Roulette don’t stand up quite as good here. That’s easily overcome by the command performances these actors provide in these moments. This wasn’t a period film at the time. Today it is in many ways. The colors and film stock took me back to that era and kept me there for 3 hours.

The DTS-HD MA 5.1 track does as much as you should really want it to do. The film was originally released in stereo and that option is made available here. So don’t look for aggressive surrounds because they honestly shouldn’t be there. Instead the surrounds offer just a hint of placement and fill out the score. The subs also don’t quite deliver in the explosive scenes but I see that less as a flaw and more out of respect for the source material. Dialog comes through. There’s a moment here or there where a line doesn’t come through. Sadly, actor John Cazale was literally in the last weeks of his life, suffering from cancer. The actor tended to have a subdued voice even when healthy. Here you might require subtitles to get it all.

(Commentary with Cinematographer Vilmos Zsigmond and Film Journalist Bob Fisher) I had high hopes for this track considering I really enjoy the cinematography of the film but to be honest this track is a bit of a snooze fest despite having plenty of insight into the making of the film.  Your best bet, for your favorite moments in the film if you want to hear about how it was done, go ahead and just skip around to those scenes..

We Don’t Belong Here: (8:26) An interview with John Savage about his experience making the film, personally my favorite story centers around the helicopter stunt.

The War At Home: (11:28) An interview with Rutanya Alda who plays Angela in the film.  It’s rather basic but its surprising how many details she remembers from the making of the film.

A National Anthem: (13:50) An interview with Michael Deeley who was one of the producers on the film and was a key figure in getting the film made.

This Is Not About War: (12:54) An interview with Katy Harber and Willett Klausner, two women that had major roles behind the scenes making The Deer Hunter.

Interview With David Thomson: (24:03) A film critic that was part of one of the first screenings of the film, he discusses the impact of the screening.

Deleted and Extended Scenes: (39:53) There are 22 “scenes” here though a majority of them are simply a variety of shots of the men as they escape down the river in Vietnam.  Really this was disappointing, I was hoping for perhaps a few scenes that just gave us more story but there’s nothing really here.

Simply put, I love this movie.  Everything from the performances, to the cinematography is extraordinary.  I may not have been born when this was first released but from the first time seeing it to decades later and numerous viewings later I continue to feel this films impact.  For its time there hadn’t been a film like it and since many have attempted to emulate it and fail in the process.

Brent Lorentson is a horror writer and film critic based out of Tampa, Florida. With a BA in Digital Film, he co-wrote and co-directed Scavenger Hunt. His short stories have appeared in various horror anthologies. In 2019 his short script Fertile Blood will be a part of the anthology horror film Slumber Party. He is currently working on his first novel A Dark and Secret Place set to be released in late 2019. Favorite Films: Taxi Driver, Fight Club, I Saw the Devil, The Wild Bunch, Dawn of the Dead, A Clockwork Orange, Pulp Fiction, Heathers, The Monster Squad, and High Fidelity.
Escape from L.A. (Collector’s Edition) (Blu-Ray) The Postcard Killings (Blu-ray)