Posted in: No Huddle by Brent Lorentson on June 9th, 2020 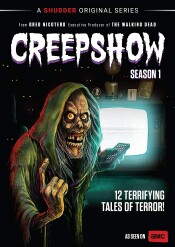 Over the past decade we’ve seen a resurgence of reboots, remakes, and anthologies, so it isn’t much of a surprise that the beloved horror anthology Creepshow would get the reboot treatment. To be fair, this is an extension from what the first films set out to be, though the big difference is instead of just being a film with a few stories, it is now a TV series, each episode containing two tales to horrify and entertain.  When I first heard about the series, I was cautiously optimistic. The first two films I consider classics, as do many other fans of the horror genre.  Then there was that third Creepshow that I feel we all just want to forget and pretend never really happened.  Without George Romero being around, I just wasn’t even sure I’d want to see a show that could possibly just water down everything that was great about the films and simply turn out to be a cheap imitation.  Now that I’ve watched Season 1, how does it fare alongside the previous films?  Honestly, I found myself impressed with what I saw, and there is plenty of potential to be refined here.

Episode 1 gets the season started on a strong note with the stories Gray Matter and The House of the Head.  The first story comes courtesy of Stephen King, one of the co-creators of the original Creepshow, and the story definitely sets the tone for the series while at the same time setting expectations for the stories that will follow over the course of the season.  The story is relatively simple, about a boy whose father is going through some changes as a result of a beer he’s been drinking.  I really don’t want to spoil much about this episode, but considering it stars horror icons Adrienne Barbeau and Tobin Bell, the talent elevates this tale all the more, and what’s more impressive is seeing Greg Nicotero directing something that isn’t The Walking Dead.  The pacing of this story is excellent, and sure, I wish it were longer; it’s always a pleasure to see Barbeau in a horror setting, and Tobin Bell has nice albeit brief on-screen chemistry with Giancarlo Esposito.  There isn’t much time to absorb what we’ve just seen before the second story starts up, which has its own unique creepy tone about it. The House of the Head is a story about a little girl and her dollhouse. Everything seems nice till something very unpleasant seems to be stalking the toys in the dollhouse.  It’s the detail that went into the creation of the toys that sells the horror with this story as well as the performance from the young girl.  For those eagle-eyed viewers, you’ll catch some cool Easter eggs hidden in the dollhouse.

The second episode feels more like a B monster film double feature, and I say that with the highest praise.  Nazis and werewolves, then a story about a mischievous monster that kills for his friend/owner.  It’s  at this point I was really enjoying the show, I loved how each story was its own unique thing, but even better, it was the practical effects that made me happy.  It should come as no surprise that the effects would be executed this well; after all you have two legends of horror effects Greg Nicotero and Tom Savini working on the show.  It’s in the sixth episode and the story Skincrawlers where I feel the effects fully blew me away.  Sure, there are practical mixed with digital effects, but the creature in this one simply kicked ass, and the gore was the right kind of over-the-top that I’ve come to expect from these effects gurus.  On the other end of the spectrum, when it comes to having a grand effects piece, yet no gore, the lake monster in By the Silver Waters of Lake Champlain is impressive in its own way.  Obviously there are some budgetary limitations with each of these episodes, but not once did I feel cheated when it came to the visuals, but that’s what you come to expect when you have access to some of the best in the industry.

While I wouldn’t say there are any episodes that are flat-out bad, there are of course some weaker stories in the bunch. Lydia Lane’s Better Half and Times is Tough in Musky Holler are personally the ones that would come up at the bottom of my list.  Lydia Lane …this story simply just felt too familiar, while Musky Holler simply felt anticlimactic.  I still enjoyed the stories, but obviously when telling a variety of tales and attempting to appeal to variety of people, not every story will land its mark.

As for the storytelling aspect, when you have Stephen King, Joe R. Lansdale, Joe Hill, and John Skipp (just to name a few) offering up story content, the bar is set pretty high for the quality you should expect.  The last time I believe there was a horror anthology with this kind of talent behind it, you’d have to look back to The Masters of Horror series that came out a while back. The only obstacle I see getting in the way of Creepshow improving is I’d like to see more directors coming in to step behind the camera.

Perhaps my favorite thing about this DVD release is that it is filled with hours of bonus content.  If you enjoyed the show, I highly recommend digging into these bonus materials.  Each episode comes with a commentary, on Disc 3 it is filled with bonus content that covers all the episodes, and really there is so much more: everything from interviews, behind-the-scenes footage, photo galleries, and even a segment that delves into the show’s Easter eggs.  The biggest takeaway I have from the show is that it was made with a lot of love and respect for the first films. If the show goes on to a second season, I believe it will only improve, and I felt Romero would be proud of what Creepshow has evolved into.

Brent Lorentson is a horror writer and film critic based out of Tampa, Florida. With a BA in Digital Film, he co-wrote and co-directed Scavenger Hunt. His short stories have appeared in various horror anthologies. In 2019 his short script Fertile Blood will be a part of the anthology horror film Slumber Party. He is currently working on his first novel A Dark and Secret Place set to be released in late 2019. Favorite Films: Taxi Driver, Fight Club, I Saw the Devil, The Wild Bunch, Dawn of the Dead, A Clockwork Orange, Pulp Fiction, Heathers, The Monster Squad, and High Fidelity.
The Good Place: The Complete Series (Collector’s Edition) (Blu-ray) Gladiator ( UHD Blu-ray) (4K) (Steelbook)