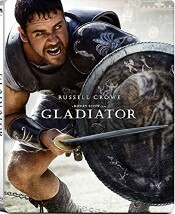 “My name is Maximus Decimus Meridius, commander of the Armies of the North, General of the Felix Legions and loyal servant to the TRUE emperor, Marcus Aurelius. Father to a murdered son, husband to a murdered wife. And I will have my vengeance, in this life or the next.”

After nearly 20 years, it’s hard not to already consider Ridley Scott’s Gladiator a classic. But not in the same way we think of Blade Runner, which has become more of a cult classic, or Alien, which has all the trappings of a genre film, blending horror and science fiction into a nice little package. Gladiator is a mainstream film that took the deserved Oscar for best picture along with four others in the 2001 awards ceremony. With this film, Scott was able to explore more powerful themes that, like the actions of Crowe’s Maximus, echo through eternity. Maximus (Crowe) is Rome greatest general and surrogate son to Marcus Aurelius (Harris), Caesar of the Roman Empire. Marcus wants Maximus to be his successor and turn Rome over to its people. Commodus (Phoenix), son of Marcus, has other plans. He murders his father, and when Maximus won’t pledge his loyalty, orders that he be executed. Maximus escapes. Nearly dead from the journey, Maximus discovers his family slaughtered. He is found and sold into slavery. Former gladiator Proximo (Reed) trains him to be a gladiator. With the same skills and presence he once used to defend Rome, he now wins the hearts of the people of the arena. Maximus uses this to bring him to Rome and a chance to avenge his family with Commodus. With the help of Lucilla (Nielsen), sister to Commodus and a former lover, Maximus conspires for the fall of his enemy. Unable to compete with Maximus in the hearts of his people, Commodus agrees to fight Maximus in the Coliseum after striking him with a poison dagger. Of course, Maximus has his revenge before joining his family in the afterlife.

The film is also notable as the last for veteran actor Oliver Reed. I best remember Reed as the werewolf in Hammer’s Curse of the Werewolf. Again referring to Maximus’s statement: “What we do in life echoes in eternity.” If that’s true, then Reed is still giving memorable performances somewhere. While his screen time is limited, the large presence of Richard Harris looms over the entire film. His encounter with Crowe sets the emotional tone of the film going forward. It’s hard to cast an actor who can infuse so much of a film’s center while delivering a few minutes of time on screen. Few did it better than Richard Harris. I was glad to see that actress Connie Nielsen has enjoyed a bit of a resurgence in her career with the release of Wonder Woman. She was always quite striking in Gladiator. Her portrayal of Lucilla was both sexy and quite strong. She’s an excellent subtle actor, and I expected to see more of her than we did following the success of Gladiator. She carries on the emotional beats left behind by Richard Harris so early in the film. Then there is the powerful delivery of Joaquin Phoenix, who plays a wonderfully perfect foil to Crowe’s hero. A hero can only be as good as his nemesis is bad, and Phoenix is oh, so bad, which makes for the film’s satisfying climax. Phoenix has done a lot of great work over the years. Yeah, he can be a rather bizarre personality as himself, a role he has a lot of trouble playing. But give him the mask of a good character, and Phoenix will make him a great one.

You can’t talk about Gladiator without mentioning Hans Zimmer. The score to Gladiator remains one of the best I’ve ever heard. It’s often been imitated, often by Zimmer himself. (Listen to the Pirates themes.) But no one has ever been able to capture the magic found here. The score isn’t only grand on its own, but it somehow manages to bring to music exactly the emotions played out on the screen. I think you could just listen to an isolated score and watch the film easily in your head. Nearly 20 years later I still find myself listening to the soundtrack CD.

Finally, this film sports some of the finest cinematography Ridley Scott has ever captured on film. There is subtle genius in the way the film is lit. There’s just the right amount of grain that Paramount once tried to DNR out of the film. That deservedly led to mob action that got the studio to spend the money to redo the Blu-ray transfer.

Gladiator works for me on so many levels that it would have been easy for me to be disappointed by the 4K UHD treatment. I was not disappointed at all.

Gladiator is presented in an aspect ratio of 2.35:1. The ultra-high-definition 2160p  image is arrived at by an HEVC codec with an average bitrate of 65 mbps. Seldom have I seen a film where color reproduction was as important as it is in Gladiator. Scott relies heavily on subtle color tints (blue in the opening battle) and shadows (Commodus’ chambers) to bring out such emotion and tone. A bad transfer, untrue to these artistic flairs, could easily ruin this film. I am happy to report that the transfer is as close to flawless as is possible. Given the detail of a UHD transfer, this is like bringing the film alive once again. All of those wonderful nuanced cinematography moments are revitalized in this transfer. Black levels allow for excellent shadow definition. Most important, the HDR helps to capture the contrast that makes some of that wonderful lighting stand sharply from the darkness. When Crowe lifts up a handful of sand, you can see the particles, and it all delivers such a visceral experience.

The DTS:X audio opens to a default 7.1 surround mix. This is truly an immersive experience all the way around. From Zimmer’s haunting score to the clang of weapons in the arena, there is incredible sound separation and wonderful depth delivered by the subs. Horses get a nice bump from your subwoofer, and all of this happens in a clean environment where everything finds its place in the mix and cuts through. That means dialog never disappears or disappoints. A real sense of depth is delivered by a clever ruse in the mix. The sounds of battle become louder and more clear the closer you are to the sound. Someone is paying close attention to space when mixing these levels. Some might find this unrealistic, and I’ve heard it described as such. They’re fooling themselves, because we are not used to this level of accuracy. The audio presentation takes your ears to where the camera takes your eyes. You need to just let go and allow yourself to be taken along for the ride. You won’t regret a single second.

There are three discs in this Steelbook collector’s edition. The UHD contains both the theatrical and extended cuts of the film with a Ridley Scott intro on the extended version. There is a Blu-ray copy of the film and an additional Blu-ray disc with the extras which are all ports of the previous releases. There are no new extras to be found here beyond the packaging.

“Imagine where you will be, and it will be so.”

That was how Maximus comforted his troops before battle. If you imagine yourself in Rome during the days of the gladiator; Ridley Scott makes it very easy to do. Russell Crowe plays the role of a lifetime as Maximus. I have often heard film lovers state that they don’t make classics anymore. Whether Gladiator is the exception that proves the rule or proof against the rule is uncertain. What is sure is that Gladiator has become a true classic. What did I do on my summer vacation? Ridley Scott took me to Rome. “Are you not entertained?”

Gino Sassani is a member of the Southeastern Film Critic's Association (SEFCA). He is a film and television critic based in Tampa, Florida. He's also the Senior Editor here at Upcomingdiscs. Gino started reviewing films in the early 1990's as a segment of his local television show Focus. He's an award-winning recording artist for Omega Records. Gino is currently working on his 8th album Merchants & Mercenaries. Gino took over Upcomingdiscs Dec 1, 2008. He works out of a home theater he calls The Reel World. Favorite films: The Godfather, The Godfather Part II, The Body Snatcher (Val Lewton film with Karloff and Lugosi, not the pod people film), Unforgiven, Gladiator, The Lion King, Jaws, Son Of Frankenstein, The Good, The Bad And The Ugly, and Monsters, Inc.
Creepshow Season 1 Pennyworth: The Complete First Season (Blu-ray)