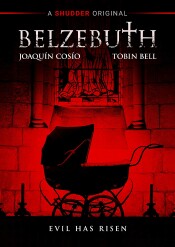 After enjoying Shudder’s revival of Creepshow, I’ve been looking forward to seeing what else they’d be bringing to their streaming service.  When Belzebuth came along, I’ll admit I wasn’t exactly excited about the title. At first glance it seems like yet another possession/exorcism movie.  Maybe it’s because I went into this with lowered expectations that this film managed to make an impact on me, but one thing is for certain, nothing about this film is “typical”.  Recently I has reviewed Season 1 of Evil, and I’m glad that show is still simmering in the back of my mind, because Belzebuth is a nice companion to the show with one big exception. Belzebuth doesn’t pull its punches, and I’ll say this right now: it’s not for everyone, and it’s a film that will get under your skin. Grab your crucifix and keep a bottle of holy water nearby, because this little film out of Mexico isn’t afraid to show us what evil may really look like.

When I say this film isn’t afraid, the opening sequence is a brutal glimpse at just what I’m saying. When we first meet Emanuel (Joaquin Cosio), we see him in one of his happier moments in the hospital with his wife and their newborn son.  Just as Emanuel is being called away to return to the police station, one of the nurses has seemed to have lost her mind and kills all the babies in the hospital’s nursery, including Emanuel’s son.  This is literally in the opening minutes of the film, and is a huge risk taken by the filmmakers, because in most audiences even intense horror fans will be easily be put off by this kind of violence, especially so early in the film.  I’ll be upfront; if violence towards children bothers you in any way, this film is not for you. Run as far and as fast as you can away from this one.  For me I took this sequence as a sign that this movie is definitely going to keep me on my toes, and I had to see how this was all going to end.

The film jumps ahead years later and we see Emanuel’s life has been shattered from the tragedy.  He finds himself involved with a series of other homicides that seem to all be connected, even to the events surrounding his son’s murder.  This is where a suspicious character enters, Vasilio Canetti (Tobin Bell), a man who has connections to the Vatican and believes that an ancient demon is involved.

One of the film’s strengths is how it embraces “evil” and shows us just how bad it can get.  The things that occur in this film under the guise of a demon is simply like nothing I’ve seen in American films. When you look at The Exorcist by comparison, Belzebuth is by far a more terrifying interpretation of what a demon can be capable of.  From start to finish this film manages to keep the viewer on edge, which is something that is not easily accomplished. Another one of the strengths this film has is how its characters are fleshed out. The characters are flawed and at times can be unlikeable but manage to have us rooting for them to overcome evil.

While I had a blast with this film and it’s definitely something I’ll recommend to others, there are some flaws that obviously hold this film back from being everything it could be.  I’m not going to spoil it, but when we discover what the motivation is behind all the kids being killed, I was a bit let down by this revelation.  For me it just raised too many questions that the film doesn’t answer.  My other complaint isn’t quite a deal breaker, but some of the CGI just seemed a bit cheesy at times.  There’s a key sequence  around the middle of the film where CGI is heavily relied on, and though the camera work, set design and music comes together nicely, I feel if they had gone with a more practical effect, this scene would have been an iconic moment.  I’m being vague only because the scene is still clever and original enough that I don’t want to spoil it, but you’ll see what I mean by the lackluster CGI. Then there is the ending, I just felt a bit cheated by it.  The first half of the film is so strong that it’s hard to not feel let down when the ending just doesn’t quite deliver.

Brent Lorentson is a horror writer and film critic based out of Tampa, Florida. With a BA in Digital Film, he co-wrote and co-directed Scavenger Hunt. His short stories have appeared in various horror anthologies. In 2019 his short script Fertile Blood will be a part of the anthology horror film Slumber Party. He is currently working on his first novel A Dark and Secret Place set to be released in late 2019. Favorite Films: Taxi Driver, Fight Club, I Saw the Devil, The Wild Bunch, Dawn of the Dead, A Clockwork Orange, Pulp Fiction, Heathers, The Monster Squad, and High Fidelity.
Trolls World Tour: Dance Party Edition (UHD Blu-ray) (4K) Africa Screams (Blu-Ray)