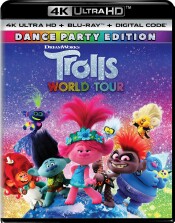 Let me start by saying that my daughter was all about this movie. Leading up to the watching of the film, she literally asked me almost like clockwork when we were going to watch the movie. With me there is always a bit of reservation when it comes to animated films since becoming a parent. I suppose you can call it bias, but I prefer the cartoons (as we used to call them in my day) of my childhood over the present content. I think that opinion is one many share. To Trolls World Tour’s credit, it does impart a lesson that I believe is very important in the present climate that the world is facing. To that end, I can say that I found the film to be quite enjoyable. The comedy was more of a situational variety and very clearly directed towards a younger audience, which meant that most of it went over my head, but the aforementioned lesson that the film taught was time-honored and showed the importance of diversity and tolerance. Anna Kendrick and Justin Timberlake reprise their roles from the 2016 original film and are joined by a host of celebrities that include Kelly Clarkson, Sam Rockwell, Rachel Bloom, and music legends Mary J. Blige and George Clinton.

Picking up after the events of the last movie, Poppy (Anna Kendrick) has been crowned queen and is looking forward a long and prosperous reign. Meanwhile, her companion, Branch (Justin Timberlake) tries to find the words to confess his feelings for her. Poppy finds her reign threatened by another tribe of trolls, the Hard Rock trolls, led by Queen Barb (Rachel Bloom), who invites her to join her on a world tour. Believing this to a sincere offer of friendship, Poppy looks forward to the Tour; however, her father, King Peppy, warns her of the danger: each tribe represents a specific genre of music (Pop, Funk, Classical, Techno, Country, and Hard Rock) with each tribe possessing a magical string that powers the specific genre of music. Years ago, the tribes lived in harmony until an uprising caused each tribe to take their string and separate from the others. Peppy believes that Hard Rock intends to steal the other tribes’ strings for the purposes of taking over all music.

Though skeptical, Poppy soon learns that is exactly what Queen Barb has planned. Enlisting her friends, Poppy heads off on her own world tour to warn the other tribes of the impending danger. Along the way, she learns hard lessons about what it means to be queen and that despite her initial beliefs, she does not have all the answers.

This disc has two modes in which to watch the film: Theatrical and Dance Party Mode. I’ll give you a guess in which mode my daughter preferred. This meant, of course, when prompted by the screen, we were obligated to either dance or sing along, a task that my daughter was all too eager to oblige, which meant that I had to oblige. The things we do for the people that we love. To its credit, the Dance Party Mode was not as distracting as I initially thought it was going to be. Despite the prompts, Nalyce was still able to follow the movie with relative ease. She was partial to Poppy due to her upbeat demeanor as well as the fact that she resonated with the Pop music more than any other genre. I suspect that this had something to do with the fact that she was exposed to more of that in the film, specifically the Pop music melody rendition that was performed by Poppy and her gang when they visited  Lonesome Flatts, the country music tribe’s territory. This performance may not have been a hit with the citizens of Lonesome Flatts, but it was a big hit with her, as she was up on her feet singing along with every song she knew, which include Spice Girls’ Wannabe, Baha Men’s Who Let the Dogs Out, as well as PSY’s Gangnam Style.

Needless to say, the film was a huge hit with Nalyce. For me, I just enjoyed the creative manner in which the film was able to spin a tale that teaches kids to accept other people’s differences and value those differences. Using the different genres of music was a clever way to make the subject matter relatable to all ages. This lesson was imparted to both the protagonist as well as the antagonist; Poppy had to learn that despite her initial beliefs that it was our differences that establish individualism, while Barb had to learn the importance of equality and that no genre is better than another. This is probably the parent in me, but I enjoy movies that find ways to impart important life lessons in a creative way. Not to mention, you need only turn on the news to see the importance of teaching diversity and tolerance for things that are different. Being able to talk to my daughter about this in such a manner that she could understand is something that I am very grateful for.

Trolls World Tour got a bit of a raw deal due to the ongoing pandemic, which halted its theatrical run, not to mention a significant hit to its gross revenue. In the spirit of that, I highly recommend the film, as it is a very good family-friendly film, making it an ideal family-sharing opportunity given the limited options available to the public due to the still ongoing pandemic. It was such a big hit in our household that we had to run it again at my daughter’s insistence.

Jeremy Butler is a film school graduate of the International Academy of Design and Technology. He is been writing for Upcomingdiscs since 2012; however, movies have played a big part of his life for much longer. Favorite genres include horror, science fiction/fantasy, and comedy. Favorite movies are V for Vendetta, Boondocks Saints, Kiss Kiss Bang Bang, and The Godfather.
Star Trek: Short Treks Belzebuth