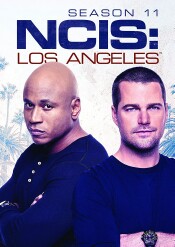 It sure has. With the world still in the throes of pandemic, it’s nice to spend some time catching up on familiar characters and compelling stories. Very few television franchises are as familiar by now as NCIS. CBS brings us the 11th season of the NCIS spin-off: NCIS; Los Angeles to DVD. The series has become one of the most successful spin-off shows in the history of television. Only CSI and the Law & Order franchises have brought more episodes to our television screens, and next season the NCIS franchise will have passed CSI. The truth is, if you go all the way back to the original JAG series, this is hands down the most prolific one-hour series in television history. What is even more amazing is that the NCIS shows continue to be the most-watched franchise in the entire world, a position they have held for over a decade. No one has come close to this kind of television domination. If this collection of episodes is any indication, the ride isn’t anywhere near reaching the end. All three shows have been renewed, with NCIS getting a new two-year commitment at CBS. If you haven’t already caught up on all of those earlier episodes, you don’t necessarily need to do that, but why wouldn’t you? You might want to get acquainted with the cast and other aspects of the series. You can at least catch up with the first 10 seasons of NCIS: L.A. Here.

The season literally picks up where the 10th season ended. Our newly married couple and field partners Kensi (Ruah) and Deeks (Olsen) are holed up in a CIA bunker with terrorists about to swarm their location. Meanwhile Hanna (LL Cool J) and Callen (O’Donnell) are on a Navy ship which has had its weapons taken over so that the bad guys can fire on three locations and make it look like aggression in order to erupt the region into war.  This premiere episode follows a trend for this season used also on the mother ship, the idea of bringing in old beloved characters. You see the ship’s Executive Officer is none other than David James Elliott, returning to his JAG role of Harmon Rabb, better known to franchise fans as Harm. But he’s not alone. The mission is overseen by Catherine Bell, returning as JAG’s Sarah “Mac” McKenzie. This JAG reunion allows us to finally find out what happened to these characters after the end of that show. Turns out they haven’t seen each other in a decade, so things didn’t quite have the fairytale ending the series finale might have hinted there would be. While this truly makes for one of the best episodes of this series, it also sets up a potential return of JAG to our televisions in one form or another. The rumors have been flying for a couple of years now, and something is planned, to be sure. Of course, those plans might be put on hold due to the pandemic. We may never know what might have been. Fingers crossed.

The JAG appearances weren’t the only reunions to happen this season. It appears that there is a lot of that going on in the entire franchise. For this show I’ve been getting the impression that the show is either winding down to exit the scene or preparing us for major changes in the wind. So far this has been the most stable cast in the franchise. There have been almost no major cast changes for the last 10 years. The teams have remained stable, and while secondary recurring characters have indeed come and gone, the show contains the same group. But now the season is dominated by characters musing their futures in the unit. Kensi and Deeks now own a bar and are talking about having children. So you can see why they are considering changes. Hanna also is thinking about stepping away unless Callen ends up in charge when Hetty (Hunt) is finally gone. Hunt herself has taken a huge backseat on the show for the last four years. She appears rarely and in only about six episodes of this season. She had a car accident which left her severely injured and was cutting back even before that. It’s obvious that the character’s run is sadly coming to an end. Even our techies are changing. Eric (FOA) is missing for the first half of the season so the actor could appear in a play. But Nell (Smith) also begins to question if she really wants to end up like Hetty, and she leaves the team. It just looks like everyone is very focused on big change this season.

And while our stable characters contemplate life away from the team, new faces are also emerging as the new blood for the future. The most significant new face is Medalion Rahimi as Special Agent Fatima Namazi. She was introduced end of the previous season, but she’s being worked into a full time member of the team. Moon Bloodgood becomes a frequent addition as Katherine Casillas, an insurance broker who assists on a couple of cases and also becomes a love interest for Hanna. Caleb Castille is being groomed for the team as FBI agent Roundtree.

The reunions also appear to indicate a winding down. This season is like a greatest hits of familiar faces making a return visit. Dina Meyer returns for an episode as CIA Agent Veronica Stephens and gets the team involved in some new life-or-death drama. Anna Kolchek, played by Bar Paly, returns to Callen’s life, but she has to clean her history of espionage and CIA work before she can live the normal life she and Callen are now looking for. Bill Goldberg gets a couple of episodes as DOJ Agent Lance Hamilton again. Erik Pallardino returns as the smartass Sabatino when Fatima ends up kidnapped by some terrorists.

There are some rather unique episodes that highlight the 11th season. A Bloody Brilliant Plan is a complete homage to filmmaker Guy Ritchie. It has all of the trademarks. There’s the information being told as a story flashback in the Ritchie clipped language. You get the title cards and split screens. There’s the Ritchie camera angles. It’s a heist story with the typical Ritchie British odd characters including one played by Vinnie Jones who appeared in several Ritchie films. You get the jargon that requires on-screen definitions. They really captured the style perfectly.

The show celebrates its 250th episode with a great Hetty story called Mother. We learn that Callen was not the only child who was taken in by Hetty to train as an agent. One of her “sons” is now looking for revenge.

You get all 22 episodes of the season on five discs. There are deleted scenes and a few short features. Of course, one looks at the 250th episode. There is the usual season wrap-up.

Season 11 appears to be a harbinger of big changes to come. There were going to be additional episodes, but they have been moved to the next season because of production shutdowns due to the pandemic. Who knows what other reunions or breadcrumbs for the future they contained? Whatever the original plan, you can expect there will have to be modifications. Will cast members leave in the 12th season? Will we see even more new faces, and will there finally be some kind of resolution for Hetty? “That sounds a hell of a lot like a hypothetical.”

Gino Sassani is a member of the Southeastern Film Critic's Association (SEFCA). He is a film and television critic based in Tampa, Florida. He's also the Senior Editor here at Upcomingdiscs. Gino started reviewing films in the early 1990's as a segment of his local television show Focus. He's an award-winning recording artist for Omega Records. Gino is currently working on his 8th album Merchants & Mercenaries. Gino took over Upcomingdiscs Dec 1, 2008. He works out of a home theater he calls The Reel World. Favorite films: The Godfather, The Godfather Part II, The Body Snatcher (Val Lewton film with Karloff and Lugosi, not the pod people film), Unforgiven, Gladiator, The Lion King, Jaws, Son Of Frankenstein, The Good, The Bad And The Ugly, and Monsters, Inc.
Tom Clancy’s Jack Ryan – Season Two (Blu-ray) His Dark Materials: 1st Season (Blu-ray)