Posted in: Disc Reviews by Gino Sassani on August 7th, 2020 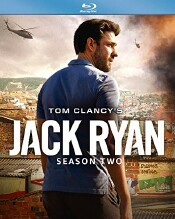 “At least attempt to hide the bias.”

Witness the birth of — actually make that rebirth of –one of the most popular action heroes in literature. Tom Clancy’s Jack Ryan has been a character of many jobs and many faces over the years. Baldwin, Ford, Pine, and Affleck have all stepped into the role of the man who has been a soldier, an analyst, an operative, and a president. What might appear as a clear advantage for this Amazon Prime streaming television show can be just as much a liability. When you throw in the Tom Clancy novels, comic books, and fan fiction, there is a ton of Jack Ryan history that pretty much gives us a story arc from his humble beginnings to extraordinary exploits and wearing the faces of a few good performers. It’s a tall order for the series and perhaps an even taller order for actor John Krasinski, who has created a nice little horror franchise with wife Emily Blunt on the side. I don’t really have the time or energy to watch streaming shows and films. There’s always a backlog here of discs that need to be watched and reviewed, and I’ve created a rather comfortable viewing experience with my home theatre I call The Reel World. Our motto: Here there be monsters. So last year I had my first experience with this series when Paramount sent the first season on Blu-ray. It was far more of a captivating and compelling series than I expected. Now the second season has reached the Blu-ray home platform format, and while I certainly detect a sophomore slump here, there’s still enough interesting drama to keep a fan engaged for another year.

When the season started, I have to say I was more than a little disappointed. There were two things that I thought threw the show off its game, and made it a little harder for me to re-engage. The first is a little bait-and-switch that started with the way Season 1 ended. With Greer (Pierce) transferred to Russia and some rather interesting documents, it looked like the series was going to enter its own version of The Hunt For Red October storyline. It turns out Greer was just pissing off his station chief and was soon on the outs, but not before he begins to track a cargo ship that looked like arms transfers from Russia. The ship ended up in Venezuela where by strange coincidence Jack Ryan (Krasinski) now finds himself also tracking the ship for other reasons. The updated cold war submarine story is quickly peeled away to make room for my second immediate issue with the second season.

In Venezuela we find there is a power struggle. The current president is a corrupt conservative part-business-magnate who is tearing the country down. If he sounds like someone we all know, that’s no accident, and just fine with me if it weren’t so overt. Running against President Reyes (Molla) is a young upstart socialist woman whose husband was the real family power, but when he was silenced and now presumed dead, she has decided to carry on his fight. Gloria Bonalde (Umana) has the backing of the young people and sees a move to socialism as a way to save her country. Again, I don’t mind the politics and bias. If it tells a compelling story, I’m fine. But they really should have picked somewhere else to stage this political drama. Venezuela actually has lived the complete opposite. Since the economy has become nationalized, it’s a perfect example of a failed state. Whatever you might think of socialism, it certainly did the opposite of work in that particular country. So going in I felt two strikes against the show before I even got through the first of the new eight episodes. So did anything save any of what was my choice as the best new show of the year last season?

Fortunately, the series continues to sport a solid production. Many shows like to say they are really a mini-film each episode, but that phrase is so often abused that it’s quite meaningless. But this show is shot very much like a feature film, and those production values remain high and more than a little engaging. The incredible environments bring alive these South American locations without actually going there. They retain a high level of authenticity, and along with high-end cinematography, you could not ask for a series to be more immersive. I feel rather badly for all of you folks who might have only experienced this stuff on a 4-inch cell phone screen. You really need to see and hear these Blu-rays on a nice system.

Jack Ryan continues to be pretty much a man out of his depth who manages to figure out what others can’t see. His relationship with Greer and chemistry with The Wire veteran actor Wendel Pierce continues to be one of the best elements of the series. The two work incredibly well together, and I hope they don’t split these guys up for long periods at a time. It’s the emotional heart of the show, and it truly helps make the high-stakes situations that much more important because we care about these guys.

The season mostly deals with the corrupt Reyes and all that he will do to stay in power. While Ryan and the team try to find the connection with these cargo ships, and when we discover what’s really going on, it’s not a bring-down that it’s not about weapons after all. Ryan travels to England to track down a killer who is involved in the plot and took down his friend Senator Jim Moreno, played by The Shield nemesis Benito Martinez. The Senator is killed in a scene virtually ripped from Clear And Present Danger and pulled off just as well on this streaming show’s budget.

There are some very interesting new cast members this season. Michael Kelly plays the Venezuelan station chief Mike November, who ends up fitting perfectly into the chemistry I already talked about with the leads. They make a wonderful trio, and I would love to see the character return with them next season. The Mummy himself, Arnold Vosloo, plays a mercenary, and we get to see his true mercenary spirit, as he’s willing to work for either side when there’s enough money to be had no matter how badly the previous beating might have been. He’s underused throughout and only has a couple of episodes where he really shines.

The series really does overcome its early moments where I was starting to dread having to watch the season. It’s still not near as good as the first, but there’s plenty to build on from here.

is presented in its original streaming aspect ratio of 2.00:1. The 1080p image is arrived at with an AVC MPEG-4 codec. It’s hard for me to imagine that people are watching this on their mobile devices. It certainly wasn’t filmed with that kind of presentation in mind. It would be easy to even live up to just broadcast standards, but this image presentation is much better than that. The detail here rivals anything I’ve seen on television. Production design here is up to box office film standards. Black levels are inky and deep with plenty of nice shadow definition. Some of the Syrian and other international establishment shots are like a beautiful travelogue. I don’t know what it looked like on your phone, but wait until you see it on a large screen.

The Dolby TrueHD 7.1 track was another wonderful surprise. Some of you heard this through half-inch speakers. Are you in for a treat here. This goes above and beyond your typical television audio presentation. Surrounds are live with chatter and immersive ear candy. The action scenes surround you in an inescapable wall of sound. Subs are like nothing television usually has to offer. I bet your phone didn’t shake a room like this presentation does. The dialog always comes through cleanly. But again, it’s the subs and surrounds that truly astound here.

Only some deleted scenes.

A funny thing caught my eye in the credit. Tom Clancy is listed as a producer of the show. Now I kind of get the reason, and we all suspected that many of these credits aren’t really for doing anything at all. In Philly they call them no-show jobs. Don’t get me wrong; I love Clancy. He was even a huge fan of my favorite football team and tried to buy them back in the day when a financially messy divorce kept him from closing the deal. But I really would love to know what he actually does for the title. I mean, when you consider he had been dead four years before the first season even started. I guess “Life got complicated.”

Gino Sassani is a member of the Southeastern Film Critic's Association (SEFCA). He is a film and television critic based in Tampa, Florida. He's also the Senior Editor here at Upcomingdiscs. Gino started reviewing films in the early 1990's as a segment of his local television show Focus. He's an award-winning recording artist for Omega Records. Gino is currently working on his 8th album Merchants & Mercenaries. Gino took over Upcomingdiscs Dec 1, 2008. He works out of a home theater he calls The Reel World. Favorite films: The Godfather, The Godfather Part II, The Body Snatcher (Val Lewton film with Karloff and Lugosi, not the pod people film), Unforgiven, Gladiator, The Lion King, Jaws, Son Of Frankenstein, The Good, The Bad And The Ugly, and Monsters, Inc.
NCIS: The Seventeenth Season NCIS: Los Angeles: The Eleventh Season