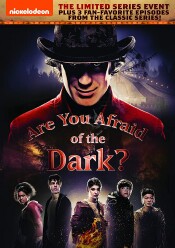 I remember this was the one show that I didn’t want to watch growing up. Ironies of ironies, I was not big on scary things when I was younger. Now it is one of my favorite genres. In reference to the original series, there was just something that really scared me about the show growing up. Of course, all it took was a dare from my family to force me to try to overcome that fear. Not sure I ever really overcame the obstacle, as once this revival miniseries came across my docket, I was hit with some of the old feelings that I experienced while watching the original show. It only took the opening sequence to send my daughter out of the room, so I was forced to overcome my childhood fears on my own, while opting to not scar my child. To that end, I must say that age has definitely made me braver, but it may also have more to do with the revitalization of the series, which I found to be more in-depth and intriguing than its original incarnation. This three-part miniseries may have been limited in how far it could go as far as goriness (given that it is a Nickelodeon production), but the storyline more than makes up for that, managing to weave a creative and entertaining web that also includes slight comedy and unique characters.

Part I, Submitted For Approval, of the series sets the stage for the next two episodes as we are introduced to Rachel, a new girl in the town of Sargento. Off the bat, it is clear that she is a bit of a social outcast and has difficulty making friends. She does possess an excellent imagination that catches the attention of the Midnight Society, a group of kids from her school who eventually engage her with the invitation to join their ranks. This comes with a caveat; she must compose an original scary story to share with the group. This task appears to be more grueling than she initially anticipated until she dredges up a being from her nightmares: Mr. Tophat.

Of the three parts, I found this the most enjoyable, partially because it does indeed set the stage for the two subsequent parts, but it was also the section that provided the most in-depth look at the characters. Predominantly, however, I was more intrigued by the manner in which the story unfolded over the course of the episode. Initially, given the series limited runtime, I expected the story development to be rushed in favor of setting up the climax. This was not the case, and I was all the more grateful for it, as it allowed me the opportunity to become more invested in the this group, particularly Rachel and Graham. I will say that Akiko’s introduction was probably the best.

Part II, Opening Night, is more investigative in nature, as a local disappearance bears a link to Rachel’s initiation story for the Midnight Society. Taking it upon themselves, the group looks into the crime, attempting to solve it themselves. To further their investigation, the Midnight Society decides to attend the Carnival of Doom, the creepy carnival from Rachel’s story and come face to face with a very real Mr. Tophat.

This episode reminded me of It Chapter 2, with a group of kids banding together to solve the mystery of the carnival that seemly did not exist before Rachel’s story, along with disappearance of a local kid. This portion has some scary elements, primarily jump scares while at the carnival. This was not enough to terrify me, but I do believe that kids ages 6-13 would be reasonably scared. An enjoyable element was the infusion of comedy, which provided a good balance to the format; the best example of this infusion was in the woods when Rachel attempts to rally the troops and they all proceed to issue a hard pass.

Part III, Destroy All Tophats, Rachel must face her fear and face the entity from her nightmares. In order to accomplish that, she and the Midnight Society must overcome dissention in their ranks, as Mr. Tophat works to divide them. Will Rachel discover the reason that she is immune to Mr. Tophat? Or will this be the end of the Midnight Society?

A worthwhile conclusion for the season, thanks to a couple well-timed twists. It delivers with a couple jump scares. I would classify it as tastefully scary. Again, I must credit the manner in which the show balances comedy with the horror elements. By the time the episode was resolving, Nalyce had returned to the room and actually sat for the film’s conclusion.

This series is very different from the one my memories, which I remember being more of the monster-of-the-week variety. Despite this departure from the original series, I believe that this method was more effective in the long run. As previously mentioned, it allowed the audience to become more invested in the characters, who are the biggest selling point for the miniseries. Their chemistry is evident in each episode, with each character bringing something unique to the overall story. They are an unlikely group of friends bonded together by a mutual love for horror. This eventually turns out to be their saving grace.

For those feeling nostalgic about the original series, this disc also includes three tales from the original run. I didn’t remember these stories, so it was like experience them for the first time. I can only hope that you all have the same experience.

Jeremy Butler is a film school graduate of the International Academy of Design and Technology. He is been writing for Upcomingdiscs since 2012; however, movies have played a big part of his life for much longer. Favorite genres include horror, science fiction/fantasy, and comedy. Favorite movies are V for Vendetta, Boondocks Saints, Kiss Kiss Bang Bang, and The Godfather.
His Dark Materials: 1st Season (Blu-ray) NCIS: New Orleans: The Sixth Season