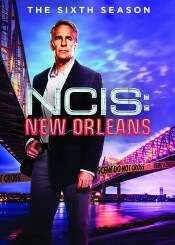 “You’re not failing. You just haven’t succeeded yet.”

If you are at all familiar with the NCIS franchise, you know that the show tends to follow a bit of a formula. Each spinoff has some unique style aspects, but the episodes tend to be relatively self-contained. That means you can start with Season 6 of NCIS: New Orleans and still be able to appreciate most of what’s going on. You’ll get to know and understand the characters pretty quickly. That’s more true of this particular member of the NCIS family than the others. It has had the most cast turnover. By the end of this season there will only be three characters who have been there since the beginning. Compare that to the L.A. version where you’ll find over a decade of no lost cast members, and you’ll find this one is the easiest to drop in and out of. Unfortunately, that also contributes to the fact it is my least favorite entry in the franchise. And all of that is in spite of the fact that I’m a rather big Scott Bakula fan, having been impressed by both Quantum Leap and his tenure as a Star Trek captain in Enterprise. So while you could certainly enjoy this release on its own, I still recommend you go back and catch up on the first five seasons just to get caught up and maximize your enjoyment. The good news is that we can help you with that. You don’t have to wade through 10 years of JAG, 18 years of NCIS, and 11 years of NCIS: L.A., although that might be one heck of a fun binge. Just catch up on the first five seasons of this show and you’ll be ready to go. You can check out those reviews here.

The other thing holding this entry back is that they have pretty much fallen into a bit of a rut. This season begins like three of the others, with either Pride (Bakula) or a member of his team (last season it was the entire office) under review from some big shots about the way they do things. This time the reviewer is an against-type Richard Thomas as NCIS Deputy Director Van Cleef. He’s a typical thorn in the side for the team, but it’s not Pride or his team he’s really after. It’s Special Agent Hannah Khoury (Zadegan), who was put in charge of the team while Pride took a promotion last season that didn’t work out. We always knew he’d be back in charge, and he pretty much was anyway neglecting his new office duties. At first I just looked upon this season start as a way to set things right for the coming season. In order for Pride to get back officially in charge, Hannah is going to have to be demoted. That’s exactly what happens, of course, but I credit the writers for not just using the event to set things right. The relationship between Van Cleef and Hannah will build toward a serious confrontation and new mission in life for Hannah. It’s the end of the season we get the payoff, but not quite as quick satisfaction as we would have gotten. COVID-19 stopped production early and that story was just getting to the payoff when it was unfortunately preempted by the production shutdown. We get an unintended cliffhanger that will be resolved in the first episodes of the 6th season.

Sandwiched in between these stories you’ll find much of the usual cases to confront the team. There are two notable exceptions to the routine. The first involves yet another cast member leaving the show. It was no secret that Lucas Black decided to leave to spend more time with his family that the New Orleans location shooting didn’t really allow. His death is no spoiler to anyone paying attention. But he gets to do some emotional stuff before his exit, and his leaving is a serious blow for the series. He was my favorite character on the series, and it won’t be the same without him. You will get some quality time with Christopher before he goes, and huge credit to the writers for making it a compelling story arc.

The second big story is some fallout from Pride’s kidnapping and torture the year before. One of the ways he was abused was being dosed with LSD. He’s not only dealing with the stress of the ordeal but some bad mental results of the drugging. He’s having disturbing dreams about a mysterious man dressed in red. He’s not getting any sleep, and it’s making him sloppy and his friends worried. He takes some huge medical risks to attempt to resolve the issue, to discover it was related to a suppressed memory out of his childhood. It gives us another nice piece of the puzzle that is Dwayne Pride. It also resolves over several episodes.

Another peek into Pride’s past occurs when he must return to the New York town where he was a sheriff’s deputy some years before. He stirs up a little trouble when he begins to doubt that a killer he busted was the right guy. It’s another complicated issue that has more forward reaching implications, particularly for his daughter, who falls for New York Detective David Cabrera, played by Lenny Platt. Pride is going to have to get used to the guy, because his daughter decides to marry him. It brings up all of the bad blood between Pride and his own ex-wife over how hard it is to be married to a cop. That just got a lot worse.

Other episodes deal with UFO’s, an international femme fatale, killer drones, and a terrorist hacker who likes to blow stuff up by manipulating gas lines to explode any place in the city he wants. There’s some interesting real-life foreshadowing when a cop is accused of killing an unarmed black man and racial tensions get out of control. There’s even a crook who steals Christopher’s inactive identity and crosses paths with the team. Sabastian decides he needs more action in his life, so he trains to become a member of NCIS’s REACT Team, which is the Navy’s version of SWAT. Wade’s adopted son wants to be a cop, which worries her to no end when he decides to go on a police ride-along. Hannah deals with new challenges when her ex-husband finds a new lady and Hannah worries she’s being replaced, particularly in her daughter’s life. Of course, the team must deal with Christopher’s death and getting the arrogant, slippery guy who killed him. The season also brings us the inevitable replacement for the deceased officer.

Enter Charles Michael Davis as Special Agent Quenton Carter. He’s the direct opposite of Christopher. He tends to stay in assignments for short periods and move on. So he’s not interested in getting close to anyone, although he ends up being nice to Wade. He upsets the team by pushing out Christopher’s stuff and taking over his desk before the team was ready to deal with it. He showed up earlier than he was supposed to. He’s more than a little arrogant and likes to dress in expensive suits. Obviously that casting was intended to shake things up a bit.

What really shook things up more than a bit is the pandemic. Production closed early, as it did everywhere productions were active. There are only 20 episodes instead of the planned 24. You get them all spread out over five discs. Extras include some deleted scenes, the usual season round-up, and a brief feature on the death of Christopher. We’re really in mid-story, and I’m looking forward to how it all turns out. While this is still my least-favorite NCIS series, there’s still a lot of good things that had to be pushed aside for a time, but I don’t see that lasting. “No one puts Baby in a corner.”

Gino Sassani is a member of the Southeastern Film Critic's Association (SEFCA). He is a film and television critic based in Tampa, Florida. He's also the Senior Editor here at Upcomingdiscs. Gino started reviewing films in the early 1990's as a segment of his local television show Focus. He's an award-winning recording artist for Omega Records. Gino is currently working on his 8th album Merchants & Mercenaries. Gino took over Upcomingdiscs Dec 1, 2008. He works out of a home theater he calls The Reel World. Favorite films: The Godfather, The Godfather Part II, The Body Snatcher (Val Lewton film with Karloff and Lugosi, not the pod people film), Unforgiven, Gladiator, The Lion King, Jaws, Son Of Frankenstein, The Good, The Bad And The Ugly, and Monsters, Inc.
Are You Afraid of the Dark? (2019) Blue Bloods: The Tenth Season