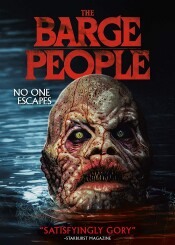 This film would probably work as a student film production. In its present form as a home media release, it falls short. The Barge People does its best to come off as a suspenseful addition to the horror genre, but in my opinion, it does not accomplish the needed goal: the suspense. The film follows two couples on holiday. It is very clear that each pairing has different ideals: one couple as been together for a while, but is living in the moment not really planning for the future, while the other has their minds set directly in the future. The only thing linking these couples together are the women, who happen to be sisters. It is evident that the men have nothing in common, and that if it were not for their significant others, they would prefer to not know that each other existed. Throw some inbred cannibalistic killers on top of that, and you basically have your movie. Timing was a big reason for me that this movie missed its mark. Perhaps with a few subtle changes, I would have enjoyed it more.

In regards to those changes, one was how long it took to introduced the Barge People. It is a quarter of a way through the movie’s runtime before we get our first peek at these creatures that are the basis for the film. I understand that this time period was intended to provide the audience with insight to the characters (i.e. the couples). Unfortunately, a majority of the characters are one-dimensional, and there is not enough depth to make them really identifiable. For example, the character of Ben was very unlikeable. Granted, that was clearly by design. We were not supposed to like him because he was a snob and had a holier-than-thou attitude. That said, given the amount of time his character occupied, there should have been more to him or an explanation to the attraction between his and the Jade character.  Based on what I saw, I did not get the attraction. When it comes to the other couple (Kat and Mark), the connection between the characters is better and more relatable. Their relationship is more loving, especially when Mark is giving Kat encouragement to go for help; the speech about her mom showed what motivated the character, making her the most fleshed-out character of the quartet.

Now let’s talk about the Barge People specifically; the cover art gave them some mystique. I wasn’t sure what to make of them. Were they mutants? Were they part fish? It turns out that they were more The Hills Have Eyes than mutants. So my first impression based on the cover art was intrigue. These was the right touch of gore to make these creatures intimidating. This did not hold up to the creatures’ introduction in the film. When the creature emerges from the water, it was almost comical; this was not the appropriate moment for a slow-motion sequence. The creatures’ emergence showed the low production quality of the costume design. The film attempts to make up for this with high-quality gore. This was something the film did right in my opinion; the film is bloody without question. However, the gore is used to distract away from the holes in the story and other pitfalls like competition between the audio and the musical score. On multiple occasions, the musical score overpowers the action sequence. The score attempts to provide an edge-of-your-seat feel, but its competition with action sequences makes it more of a nuisance.

Needless to say, The Barge People was just not my cup of tea. It is not the worst horror film that I have ever seen, but it is far from the best. The gore was cool and very realistic, but this is not enough to make a film great. It is obvious that the gore was expected to distract away from the areas that the film falls short on. Unfortunately, there needed to be more story development and better utilization of the film’s runtime to make it more suspenseful.

Jeremy Butler is a film school graduate of the International Academy of Design and Technology. He is been writing for Upcomingdiscs since 2012; however, movies have played a big part of his life for much longer. Favorite genres include horror, science fiction/fantasy, and comedy. Favorite movies are V for Vendetta, Boondocks Saints, Kiss Kiss Bang Bang, and The Godfather.
The Wretched (Blu-ray) Batwoman: The First Season (Blu-ray)