Posted in: Disc Reviews by Brent Lorentson on August 21st, 2020 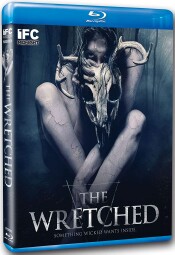 t’s a bold move when a film wants to compare itself to an 80’s classic like The Goonies. If anything, it more closely resembles the 2007 film Disturbia, and that film borrowed heavily from Alfred Hitchcock’s Rear Window.  Had this film stuck closer to the Hitchcock formula, I feel The Wretched could have easily been a stronger film, but the biggest problem the film has is that it tried to be too clever for its own good, and as a result it comes off a bit sloppy and contrived.  That doesn’t mean that this is a bad film; in fact it’s a fun late-night romp, but what’s frustrating is seeing how it could have been so much more.  While I know there was some buzz for this film earlier in the year, I’m kind of wondering if this buzz was generated by those who had actually seen the film or those who had only seen trailers? The film opens up with a young girl arriving at a house to babysit. It doesn’t take long for her to see that something is wrong at the home, and of course something is definitely going on in the basement.  This is our first introduction to the skin-walking, body-modifying witch.  These sequences are standard in horror films nowadays and typically set up the film, but in this case it was a waste and ruins the potential mystery of the story that follows. Does it matter that the opening took place 35 years ago? There isn’t even a callback to this incident later in the film, but instead so much is given away.  Perhaps this sequence was added due to pressure from the studio or investors, but it was a big mistake.

When the film’s actual story picks up, we meet Ben (John-Paul Howard) who is following the familiar story trope of having to spend the summer with his dad, Liam (Jamison Jones) after getting into trouble back home and is sporting a cast on his arm.  Liam isn’t going to let his son relax in the small seaside town; instead he’s putting him to work at the marina.  While the actions by Ben’s divorced parents seem to imply he’s this bad, rebellious teen, really Ben just seems like a typical lonely kid who’s dealing with his family’s separation.  The marina works as a place to introduce characters, but really it’s all a distraction from what’s happening at the neighbors’ house. Sure, I understand wanting to give your story depth, but the family drama and Bens run-ins with the local spoiled kids just feels like unnecessary fluff that is a tension killer.  It’s like horror lesson 101: isolate your protagonist and keep the horror nearby where his life can constantly be in peril; don’t let him be able to just leave whenever. It’s why the character in Rear Window had a cast on his leg; it’s why in Disturbia he had the ankle monitor. Sure, the marina offers Ben the chance to meet his love interest, Mallory (Piper Curda), but obviously there are other ways this could have been done.

As for the neighbors, again there is no mystery here for Ben to unravel with the audience, because we see just about everything happening in the home.  We somewhat see how the mom is influenced by the witch and how she takes over the body and goes after her family, so why bother having Ben go through a discovery we already know everything about?

There is one nice twist, and it involves how characters seem to forget their loved ones. This is something I wish could have been explored earlier on, because it opens up a lot of creative possibilities.  Another one of the film’s strengths is with the creature effects. One of my favorite visuals we see early on revolves around a deer and “something” that may be inside it.  It’s a creepy, gory visual that was effective, and it’s a shame we didn’t get much more of this. More gore would have helped the fun creature feature aspect of the film.

Despite the attempts to create an ominous atmosphere, the film never quite develops a creepy vibe. A lot of this is because of its continual bouncing between family drama and creepy creature situations.  The last third of the film is actually when the film finally decides to let loose and just have fun. Even though some twists don’t make sense, I chalk it up to maybe they are setting up for a sequel where they can answer things.  Still, by the time the film ends it definitely managed to rebound slightly, but it still felt like a squandered opportunity.

The Wretched is presented in the aspect ratio 2.40:1.  The 1080p image is arrived at with an AVC MPEG-4 codec at an average of 26 mbps.  The major complaint I have with the film is that the visuals are too clean. It reminded me of the horror films from the late 90;s and early 2000’s where the horror films were too polished.  When it comes to picking up the detail with the gore and when the film shifts to the “witch’s lair”, I did like that we got a reasonable amount of detail in the low light situation.  Skin tones look natural even though there seems to be a subtle use of saturation.  The blood looks a little muddy, but aside from that, the overall image was pretty good without compression issues or any artifacts.

The DTS-HD Master Audio 5.1 track is a little more impressive than what I was expecting.  The creature sounds as well as the SFX for the creepy and grotesque scenes are what work best.  The crunching and the popping of bones as the creature is taking shape in its human husk are definitely cringe-worthy.  The dialog is clean throughout. Though the score was a bit underwhelming, it serves its purpose for the film without drawing attention from the story.  Sure, there are some sound design issues that play to jump scares, but it’s not so bad. One of the best uses of the sound design was creating movement of the creature crawling around on the roof, where the side speakers and bass get a decent workout.

Audio Commentaries: The Pierce Brothers: Though it offers some insight into the film, it wasn’t a track I was enthusiastic about.

Commentary with Composer Devin Burrows:  For those curious about getting into composing music for films, this is worth checking out, but otherwise it might be a bit of a snooze-fest.

There are no Special Features on the disc.

The Wretched is one of those films where if you just need to watch something new and are just looking for a late night brainless flick, this will do the trick.  For serious horror fans, I know there will be some who will really enjoy this film, but there are really so many films out there that tackle the same material and do it better.  I wasn’t expecting Hitchcock quality, but with a little less story padding this could have been a stronger film.

Brent Lorentson is a horror writer and film critic based out of Tampa, Florida. With a BA in Digital Film, he co-wrote and co-directed Scavenger Hunt. His short stories have appeared in various horror anthologies. In 2019 his short script Fertile Blood will be a part of the anthology horror film Slumber Party. He is currently working on his first novel A Dark and Secret Place set to be released in late 2019. Favorite Films: Taxi Driver, Fight Club, I Saw the Devil, The Wild Bunch, Dawn of the Dead, A Clockwork Orange, Pulp Fiction, Heathers, The Monster Squad, and High Fidelity.
Blue Bloods: The Tenth Season The Barge People