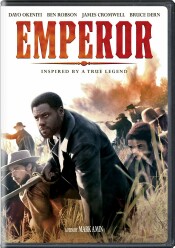 “What’s more important, Frederick? Freedom for one man, or freedom for all men?”

Inspired by a true legend. Emphasis on “inspired”, as this film does quite a bit of deviating from the historical data. Then again, I like to look at from the perspective of the main character: when recounting whether or not the legend that he is descended from kings is true, “It’s true to me.” Emperor is the tale of Shields Green, an outlaw slave in pre-Civil War South who went on to take part in the Harper’s Ferry raid, which is one of the events that sparked the Civil War. Dayo Okeniyi (Shades of Blue) has the momentous task of bringing this little-known historical figure to life. It is a challenge, but I do believe that Okeniyi was up to the task. While the story does have spurts of intrigue, for the most part it is told in a matter-of-fact tone, giving it the feel of reading it from a history book, minus the areas of deviation that is, which do come off as fantastical at times. Okeniyi is joined by Naturi Naughton (Power), Kat Graham (The Vampire Diaries), Harry Lennix (The Blacklist) as Frederick Douglass, and James Cromwell as John Brown.

The film kicks off with action, showing the seizing of Harper’s Ferry before jumping back at a pivotal moment of the action that leaves the audience in the dark as to the fate of a particular character to the beginning of Shields’ story. Shields is slave who acts as more as the organizer for a plantation in Louisiana, a rare position for a slave. He has the respect of his peers as well as the family that owns the plantation; his wife works in the home, and his son is able to read. When the plantation owner, a degenerate gambler, loses the plantation to a more ruthless owner (MC Gainey), Shields loses his position in favor of a white man, one who has no qualms about scapegoating Shields when he orders the wrong amount of seed due his inability to calculate the proper amount.

Despite this, Shields is determined to keep the peace until he has earned enough to buy his and his family’s freedom. That is, until that same man whips his son for merely reading a book. Shields loses it and, in his rage, kills two white men and is forced to flee without his family. Hunted for his action, Shields attempts to make his way north, leading to several adventures, including robbing a bank and linking up with legendary abolitionist John Brown.

My knowledge of Shields “Emperor” Smith was nonexistent before this movie, I have no trouble admitting that. While this film is not a full true account of his life and deeds, I do believe that there are enough facts to establish him as a important figure, one worthy of being taught in history class, because if even a small percentage of the things that he accomplished are true, it makes him an exemplary individual. Even starting with his legend of being descended from Kings. While this legend is never fully verified, it is enough to fuel intrigue about the character as well as his exploits. As his legend grows, it is very believable that tales of him began to spread from plantation to plantation.

Where the film deviates from history the most is with the character’s eventual fate. Hollywood in its zeal to provide a happy ending chose to rewrite Shields’ ultimate fate of being hung for his part in the Harper’s Ferry like John Brown. Though I applaud the effort to provide this deserving man with a better end to his story, unfortunately, Tarantino remains the only person to be able to rewrite history without consequence (i.e. Inglourious Basterds and Once Upon a Time in Hollywood).

As previously mentioned, the film has quite a cast with additional names like Ben Robson (Animal Kingdom), Keean Johnson (Alita: Battle Angel), and Bruce Dern. However, a majority of their performances are one-offs in order to flush out a particular exploit attributed to Shields. This thereby makes their performance one-dimensional, due to a lack of creative freedom. Robson has more of an arc in the film; however, he as well is one-dimensional given his singular motivation; he expresses no real emotion other than greed. Okeniyi is the focus of the film, and while a majority of his performance is matter-of-fact, he displays charisma when explaining his choice to follow Brown to Harper’s Ferry. In that scene, it felt like he fully committed to the character.

Not historically accurate indeed, but still a worthwhile experience and telling. Some legends are worth being rewritten, but I believe it may have been more powerful to show him standing by the weight of his convictions. By Frederick Douglass’ own recounting, Shields could have escaped Harper’s Ferry, but he chose to go down alongside Brown. I believe that could have served as a more powerful message and conclusion for the film. Sometimes it’s nice to live in a fantasy, but truth will always be more powerful.

Jeremy Butler is a film school graduate of the International Academy of Design and Technology. He is been writing for Upcomingdiscs since 2012; however, movies have played a big part of his life for much longer. Favorite genres include horror, science fiction/fantasy, and comedy. Favorite movies are V for Vendetta, Boondocks Saints, Kiss Kiss Bang Bang, and The Godfather.
The Flash: The Complete Sixth Season (Blu-ray) SEAL Team: Season Three