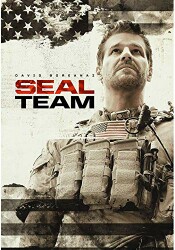 “18 years of sustained combat. I learned a long time ago to remain calm in the chaos, so that the fighting doesn’t bother me. But when things go quiet, I hear Father Time coming for me. A new battle on the horizon, and for the first time in my life I’m feeling an enemy I don’t know how to fight.”

What David Boreanaz does is create iconic television characters. He has had no trouble getting work over the years. He has had the ability to jump from one successful series to another and enjoy longevity in those roles. Unlike many actors who have had big television roles, he doesn’t get at all pigeonholed or typecast. In Buffy The Vampire Slayer he originated the role of the vampire Angel, who spun off to his own series for several years. Immediately after that he took on the role of an FBI agent and partner to the title character on Bones. That job lasted a decade. Before the remains of Bones could be laid to rest, he was already working on his next new series. Now he’s the field leader of a Navy SEAL team, and if the first three seasons of SEAL Team is any indication, he’s going to be dodging bullets and RPG’s for the foreseeable future. CBS has a big tradition of long-running shows, and I wouldn’t be surprised if a decade from now I’m talking to you about the 13th season of SEAL Team.

David Boreanaz plays Jason Hayes. Hayes is the field commander for a Tier 1 SEAL team coded Bravo Unit. These are guys who are always on call for covert ops missions. While the majority of their missions occur in the Middle East hunting down terrorists, they could be called for anywhere in the world and at any time. This season the team spends a lot of time in Serbia and Greece. This season the miles are starting to weigh on his mind. We learn he keeps a contact folder in his phone with the numbers of the 40 brothers he’s lost over the years. He’s also worried that he might not be able to operate for much longer. When an injury requires surgery, it sends him on a long downward spiral as he thinks of life without his brothers. He’s right to be worried. It seams that Bravo Team is heading toward a major breakup.

Jason’s second in command is Ray Perry, played by Neil Brown Jr. Ray is finding it hard to care for his family and his brothers. It was always expected he would one day lead a team of his own, but the family needs a bigger house, and he believes his brothers need him. So he breaks ranks to try for Warrant Officer, which would keep him in the vicinity of his team, but as an officer. Jason doesn’t take it so well at first.  A.J. Buckley plays Sonny Quinn. He’s the contradiction and often humor of the team. While he’s the big muscle guy and a tough fighter, he also has a lot of phobias, which include spiders and heights, which are often unavoidable, particularly for a guy who jumps out of airplanes for a living, sometimes in thick jungles. He’s a Texas man with a ton of pride. He’s been secretly romancing Ensign Davis (Trucks). When they get close to getting caught, she breaks up with him, and it puts him on a bit of a depression. When he’s benched because of a bar fight, he’s sent to Texas for artillery school as a punishment. We discover he has an estranged father and a girl he left behind. It might just have been the time he needed to get his head up. It also has him considering leaving Bravo to go back and help his dad run the farm and be with his high school sweetheart. Justin Melnick plays Brock, who handles the team’s explosive-sniffing German shepherd named Cerberus, who is played by Dita the Hair Missile Dog, who actually does get credit in the show. Melnick actually owns Dita and is the dog’s actual trainer, which works out well on the show.

The team is supported by an overwatch group who sit in a high-tech control room and assist with the missions. The commander of the unit is Lt. Commander Eric Blackburn, who is played by Judd Lormand. He’s responsible for looking out for the team and giving the orders while Hayes commands on the ground. Davis has been promoted from weapons officer, and she discovers that she has a pretty good knack for figuring out the tactics of the bad guys. The trouble is, she’s trying to get them to take her seriously.  In overwatch is also CIA Agent Mandy Ellis, played by Jessica Pare. It’s her job to get the intelligence for the missions, and she provides liaison with CIA personnel and resources in the field. She’s attempting to come back from a bad time last season. The new Commanding Officer is Lindell, played by Jamie McShane. He’s not helping matters. He believes Bravo Team is living in the past and is pushing Jason out and giving the other team members ideas about leaving for greener pastures.

One of those is Clay (Thieriot), who has been the POV of the show up until now. He was the newbie back in Season 1, but that perspective has shifted back to Jason as the series has evolved. He has a new girlfriend who is a congressional aide and starts giving him higher aspirations. Between her and Lindell, he now looks toward the admiralty.

The episodes are action-packed, to be sure. The show’s ability to do battles on a television budget that look this good from week to week is pretty amazing. There’s plenty of battle action with explosions and helicopters and all sorts of operations. Many of the shows are ripped directly from real headlines. You will absolutely recognize some of these stories. The episodes also take some time to look at the impact on the families of the team members and how they deal with this kind of lifestyle. It puts a lot of pressure on Hayes.  He gets a new love interest in Natalie (Swallow), who is a physiologist who is trying to get him to eat, sleep, and work better.

This season there are only 20 episodes on five discs. The season ends rather awkwardly, and that’s because the COVID pandemic shut down so many productions before they had an opportunity to complete the plans for the full season. There are a couple of very short features, and this one doesn’t contain the traditional season wrap-up you usually find on the CBS shows. Let’s hope things get better for the characters and actors on the show. “Here’s to guns that shoot straight, chutes that inflate, and ops that go great.”

Gino Sassani is a member of the Southeastern Film Critic's Association (SEFCA). He is a film and television critic based in Tampa, Florida. He's also the Senior Editor here at Upcomingdiscs. Gino started reviewing films in the early 1990's as a segment of his local television show Focus. He's an award-winning recording artist for Omega Records. Gino is currently working on his 8th album Merchants & Mercenaries. Gino took over Upcomingdiscs Dec 1, 2008. He works out of a home theater he calls The Reel World. Favorite films: The Godfather, The Godfather Part II, The Body Snatcher (Val Lewton film with Karloff and Lugosi, not the pod people film), Unforgiven, Gladiator, The Lion King, Jaws, Son Of Frankenstein, The Good, The Bad And The Ugly, and Monsters, Inc.
Emperor The Gunsmoke Movie Collection