Posted in: No Huddle by Gino Sassani on September 9th, 2020 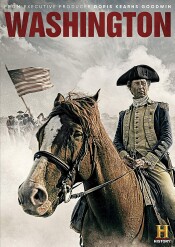 “We live in perilous times.”

He has been called the Father of our Country. Every American history class is replete with his characteristics and important biographic details. In the upheaval of 2020, the name George Washington has taken on a somewhat different tone with populations across the country. A lot of this “cancel culture” movement is a movement of ignorance. I recently read a survey that some of the folks out there trying to bring down statues couldn’t pass a rudimentary quiz on who the person even was. It’s a disturbing situation. We’ve all heard the axiom that those who refuse to learn history are doomed to repeat it. But let’s not reduce this to oversimplistic catch phrases. History doesn’t repeat itself, but as Mark Twain cleverly observed, “It rhymes.” As a history teacher myself, I don’t often point toward a television production for a history education, and I won’t start here.What I will say is that there is indeed much to be discovered here, and so if you’re planning on going out there to topple a Washington statue in the coming days, may I at least implore you to check out History’s mini-series Washington. Who knows, maybe if a reporter shows up and offers you a quick quiz, you might be able to surprise them. Better yet, the four and a half hours you spend watching Washington might even offer you a point of view you hadn’t considered, and maybe you’ll find something else to do on Statue Removal Day. One can only hope. At the very least, know your enemy.

Washington is a three-part mini-series that aired February of 2020, just about the time the world started changing. Each episode is about 90 minutes long without all the commercial breaks. The event is a bit hard to pin down exactly what it is, and there might be the show’s biggest weakness. It can’t be truly branded as a documentary or biography, because it includes a ton of dramatic footage that plays out as any historical drama might play out. Nicholas Rowe stars as George Washington, and at first I found him a somewhat poor choice. He doesn’t look much like our first president, and the earliest footage is quite awkward as he’s obviously looking for some footing on the character. But it didn’t take very long until he had grown quite convincingly into the part. Suddenly there was the Washington I remembered from the many biographies I’ve read and historical documents I’ve encountered. Then I realized that what I saw earlier was pretty brilliant. Rowe wasn’t being awkward. He wasn’t trying to find the character. He was playing a character who in his beginnings was rather awkward and even a bit of a failure. Rowe wasn’t trying to grow into Washington; he was playing a young man who had yet to grow into himself. At that point I was all in and found Rowe extremely convincing.

So there we have a rather well acted, written and played historical drama on our hands. But it wasn’t exactly that, either. The series jumps back into the format of a documentary or biography by offering the talking-heads tradition of experts and other commentators to tell us their own ideas of who the man was at the various points in the story. Some spoke with authority; like Colin Powell; others left me scratching my head; like Bill Clinton. OK, yeah, he was a president, but here he’s talking about the man’s early military mind and of the man who helped shape a nation. Sorry, but Bill Clinton doesn’t belong in any sentence where the subject is George Washington. But some of the information is relevant and quite informative from many of the other talking heads. But this is where I have the biggest problem. They don’t complement each other, and someone should have decided to go one way or the other or possibly two different productions that might have aired to complement each other. Look, it’s not uncommon for documentaries to include dramatizations of several key points. That’s not what’s happening here. There’s a lot of the drama, and it’s much better than the typical documentary inserts. This is a full-scale production with an impressive cast. All the talking heads manage to do is break the flow of that story.

The series is fair. Much of the problem folks have with Washington is that he along with many of our founding fathers had slaves. It’s a fact, and there is no getting around the point. With Washington he took advantage of legal loopholes so that he could keep them even in the free capital city of Philadelphia. There can be no argument about the evils of slavery. Any modern human being is and should be appalled that there were men who thought it was acceptable to own other human beings. I doubt there is anyone who feels that way in 21st century America. But this wasn’t 21st century America; it was the 18th century, and quite literally the first century America. I was happy to hear even black historians give a balanced presentation on that touchy subject. No one is saying he was right. It was a fact of the world at that time. It is always dangerous to judge a person of another era by the standards of the modern age. If we take it all to its logical conclusion, we are all descended from men who thought it was OK to capture, enslave, and rape women as a matter of domestic reality. It’s who they were, and it’s what was “normal” to the men who lived in cages tens of thousands of years ago. But their accomplishments remain, and we don’t neglect the wheel or fire because the guy who invented it was probably a pretty bad dude by our standards. And don’t forget, lest we one day are judged by the standards of a future century. Trust me when I tell you we will be found wanting in our beliefs, mores, and actions. Again that doesn’t mean we condone the bad action. It means we look at an historical figure as a complete picture of both the person and their time.

The first part is called A Loyal Subject and shows us Washington’s early years as a British soldier often fighting the French or Indians. He made his first name for himself as one of the few survivors of a horrible massacre of troops. His first success would actually be in retreat when his commander fell and a Lt. Washington saved a great number of his troops’ lives in retreat. It was a battle where Washington had two of his horses shot dead out from under him and arrived home with not less than three bullet holes in his uniform. No one could question the man’s courage or tenacity under fire.

This episode is a little unfair in its characterizations of his marriage to Martha. Washington comes off here as a man who takes advantage of a rich widow to enrich himself. We don’t know a lot about the couple’s interactions, because Martha burnt the majority of their correspondences after his death. So we get here an image of a cold marriage of convenience. But the truth can be found in Washington’s correspondences with his own sons and other family members. It can be found in the descriptions left behind by the many people who knew them both. What the show severely neglects is they were actually considered one of the brightest love affairs of their time, coming second only to the lore of John and Abigail Adams.

Part two is called Rebel Commander. Here’s the stuff most of us do remember. The episode tells the story of the growing resentment toward England from the colonies. A few highlights of that escalation are offered here, and before he even has time to catch his breath, George Washington is the Commander in Chief of the Continental Army, the first organized fighting forces of the United States Of America. Most of us know it was a grim start replete with horrible disasters and an army that was ill provided for. The episode does a great job of bringing those bleak moments into focus and revealing the truly brilliant moments that turned it all around. This is where I wish we had more of the drama and less of the talking. There are some incredible moments here, and they are being portrayed wonderfully, only to have any rhythm broken up by our talking heads. These are the turning points not only in a war, but in the creation of a nation and the man who almost single-handedly brought that nation into being. It ends with the sordid tale of Benedict Arnold, with much more information here than is usually provided.

Part three is called Father of His Country and carries over the Benedict Arnold story. The moments that won the war are finally finished here. Then there is the story of a new constitution and the leader of a rebellion who laid down his arms willingly to return to his farm. It was only by powerful public pressure that he returned to the public eye to now guide his fellow founding fathers into establishing the foundations of this new nation. There’s little here on his presidency, and I could have easily seen a fourth episode that gives as much detail here as it did to his military career.

The entire three parts come on two discs with no extras. It’s not really a love story of one man, but the start of a country. Most revolutions end in tyranny and more blood than the war itself. The new leaders take over and are usually just as authoritarian as what was overthrown. Just think of the French Revolution and Castro in Cuba. It doesn’t matter how pure the motives when it starts. Human nature shows us that power corrupts. But Washington stepped aside not once, but twice. He could have been president for life. So this is not a love story of a nation’s love for one man, rather the love of one man for his nation. He has flaws that today are pretty much forgivable. But give this love story a chance. “Not many love stories start with dysentery, but this one does.”

Gino Sassani is a member of the Southeastern Film Critic's Association (SEFCA). He is a film and television critic based in Tampa, Florida. He's also the Senior Editor here at Upcomingdiscs. Gino started reviewing films in the early 1990's as a segment of his local television show Focus. He's an award-winning recording artist for Omega Records. Gino is currently working on his 8th album Merchants & Mercenaries. Gino took over Upcomingdiscs Dec 1, 2008. He works out of a home theater he calls The Reel World. Favorite films: The Godfather, The Godfather Part II, The Body Snatcher (Val Lewton film with Karloff and Lugosi, not the pod people film), Unforgiven, Gladiator, The Lion King, Jaws, Son Of Frankenstein, The Good, The Bad And The Ugly, and Monsters, Inc.
Beetlejuice (UHD Blu-ray) (4K) The Goonies (UHD Blu-ray) (4K)