Posted in: Disc Reviews by Brent Lorentson on September 3rd, 2020 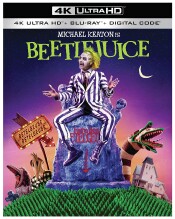 Before Michael Keaton put on the cowl to become the dark knight of Gotham City, he and director Tim Burton came together to create a film that helped launch a career and a trademark “gothic” style that would catapult Burton’s career. Sure, Tim Burton has made a name for himself doing CGI-bloated films lately, and though they’ve made money at the box office, they don’t quite have the same magic that his films had in the 80’s and 90’s, though I’ll make an exception with Big Fish (2003).  It’s impossible for me not bring a little bias to the table when discussing Beetlejuice. I loved the film as a kid and rewatched my VHS copy of it a ridiculous amount of times, and as I watched it again, I still continue to have giddy joy at seeing this film.  If for some reason this film has managed to escape you over the years, or perhaps it’s been a while since you’ve dusted off this classic, allow me a moment to reminisce.

One of the most memorable shots for me would be the opening credits sequence where the camera does a slow sweeping motion over a model of the small town that Adam (Alec Baldwin) and Barbara (Geena Davis) Maitland live in.  It’s not just the camera shot that makes this memorable, but it’s the music from Danny Elfman that makes it great.  Burton had a knack for this early on in his career; he’d do the same thing in his next film Batman (1989) that also had Danny Elfman doing the score, and he and Elfman would end up working together many more times down the road.

When we meet Adam and Barbara Maitland, they are a happy couple who have made a living and a home in this small town, and despite how desperately a local realtor is trying to sell their home, Adam and Barbara have no plans on leaving. The only thing that seems to be missing from this happy couple’s life is a child, something that’s implied they’ve maybe had difficulty with.  Unfortunately their happy life is going to come to an end after a car accident kills them both and they find themselves stuck at their home with only a book, “The Handbook For the Recently Deceased” to help guide them.  The surreal afterlife realm with the sandworms is just part of what makes this film a standout from the 80’s.  There is a lot of claymation used over the course of the film, and its style is definitely uniquely connected to Burton. Then there is the afterlife where the dead go to meet with their caseworkers to sort out what issues they may have.  Basically the design is what I’d imagine the DMV in hell would look like, but this is something better seen than explained.  What further distresses the Maitlands is the new family that has moved into their home, the Deetz family. Jeffrey Jones and Catherine O’Hara are great here as Charles and Delia Deetz, but its Winona Ryder who is the standout here as the daughter, Lydia.  The Deetz family is from New York. They have plans to remodel the home, and the Maitlands need to do what they can to stop that from happening.

What makes this film work and hold up after all these years is how it avoids falling into the typical tropes we see in haunted house films, and it’s great seeing this from the perspective of the undead inhabitants.  But the real star of the film is Betelgeuse (pronounced Beetle-Juice), played by Michael Keaton, who personally has never topped his performance in this film. There’s a reason why three decades later people are clamoring to see the man return for a sequel in this role as the bio-exorcist.  Despite how over-the-top Keaton plays the role, he remains likeable, funny, and a little bit creepy in a way that seems only appropriate in a Tim Burton film. The makeup design is great despite how over-the-top some of the visuals are. It works in this world that Burton has created, and as for the sets, I mean, am I the only one who wanted to see the inside of the demonic showgirl club?

There are just so many standout moments in this film; its 90 minute runtime flies by all too fast. If you’ve seen the movie, I’m sure you have plenty of favorite moments, and every time I’ve watched the film it’s as though my favorite moments change simply depending on my mood, and that’s not even counting the iconic “Day-O” dance sequence.  As a kid from the 80’s, this is one of the films that definitely defined my childhood, and yes, I’m impressed by how well it holds up. Despite how certain costumes may feel dated, the film very much makes the same impact now.

Beetlejuice is finally presented in its original aspect ratio of 1.85:1. The ultra-high-definition 2160p  image is arrived at by an HEVC codec with an impressive average bitrate of 65-70 mbps. The movie was shot on 35mm film and is native 4K. And wow, what a difference it all makes. Shot today, this film would likely be shot in digital 2K with the f/x maybe only 1080. This ultra-high-definition presentation is a perfect example of what we often lost in film releases even on the big screen. Colors pop here with the help of a wonderful HDR-10 injection of life. There’s a saturated and vivid reproduction at times that just really pops on the screen. Unfortunately, the Blu-ray is merely a re-release and does not contain the remastered film. On the UHD disc, you’ll be surprised at how good the film looks. There’s a minor reduction in grain that I very much disapprove of, but at least the remnants still allow for that organic feel that is really the heart of the film. Burton’s films have a life of their own that screams for actual film. The stop-motion is flawlessly blended, and I was honestly expecting it to look rather dated. It’s a credit to the original production and the care that went into the modeling process as well as some animation. The f/x are practical, and that’s another huge bonus all the way around. Black levels might not be as deep and inky as you would like them to be, but there’s plenty of shadow definition to go around. The makeup f/x hold up just as strongly. This is a film I was always fond of, but this presentation has earned it a notch higher level of respect from these often jaded eyes.

The Atmos track defaults to a pretty solid 7.1 mix. There’s a temptation in a film like this to go crazy with the surrounds. I’m happy to report that while this is certainly a wild audio presentation, nothing appears out of place or, more importantly, out of time. Elfman’s score is another of his many classics, and it leaps from the screen at just the right creepy moments. There are some clever elements to the sound design that really add the comedic beats and just the right amount of atmosphere. The dialog cuts through just fine with everything perfectly placed and crystal clear perfection.

Music Only Track: This track helps the viewer hear just how great this Danny Elfman score is.

For those who have 80’s nostalgia and want to share it with your kids while waiting for Season 4 of Stranger Things to come out, Beetlejuice is a fun one to share. I love this film, and it has me wishing Burton would return to his roots and do a non-CGI-heavy film.  Keaton still has the talent, and it’s not too late for a sequel, as long as the script is right.  This is fun for the whole family and even more fun for those wanting to recapture their childhood for 90 minutes.

Brent Lorentson is a horror writer and film critic based out of Tampa, Florida. With a BA in Digital Film, he co-wrote and co-directed Scavenger Hunt. His short stories have appeared in various horror anthologies. In 2019 his short script Fertile Blood will be a part of the anthology horror film Slumber Party. He is currently working on his first novel A Dark and Secret Place set to be released in late 2019. Favorite Films: Taxi Driver, Fight Club, I Saw the Devil, The Wild Bunch, Dawn of the Dead, A Clockwork Orange, Pulp Fiction, Heathers, The Monster Squad, and High Fidelity.
The Gunsmoke Movie Collection Washington (Complete Mini-Series)