Posted in: No Huddle by Gino Sassani on September 15th, 2020 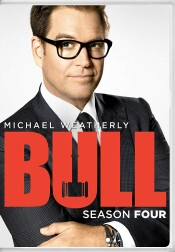 “I hear if you’re looking for a miracle, now’s the time to ask.”

When Michael Weatherly left NCIS it was like losing an old friend, both for the cast and crew of the franchise and for the millions of fans who had invited him into their living rooms for almost 15 years. But he returned to both. His presence was very much alive in the last season of NCIS. He was discussed, shown in flashbacks, and somehow continued to carry on his teasing war with McGee. But he wouldn’t return in person. That’s because he was busy with the second season of his own show Bull. And while Bull is reportedly based on the early career of Dr. Phil, nothing could be farther from the reality that Bull is 100% Michael Weatherly. I’m not sure if the shows exist in the same television universe, but they continue to be somewhat entangled. Both shows aired an episode with the exact same title on the exact same day. The shows were called Keep Your Friends Close, and there’s obviously a message to the fans in there that however successful Bull turns out to be, we’re not completely done with Tony, and there’s an effort to keep the family bonds close.

After four seasons, there are not any cast changes so that the show gets to give us more evolution of the characters, and that’s a welcome element to the season. There’s a nice little altered formula on Bull that I think is a change for the best. There is almost none of the heavy-handed look at the process that the group uses. Everyone knows that Dr. Bull is supposed to be our good old Oprah friend Dr. Phil. I still don’t believe it, and while Dr. Phil and his son remain part of the show’s executive team, I think this is merely the guy Dr. Bull wishes that he was. No insult intended, Phil, but you couldn’t be any more unlike the Michael Weatherly character here without actually being Michael Weatherly, and he’s a guy most of us would love to hang out with. Dr. Phil not so much, unless I was thinking about taking a swan dive from a tall bridge somewhere. He’s the guy I want talking me off the ledge. Dr. Bull/Michael Weatherly is the guy I want to hang out with when I come down. So Dr. Bull runs TAC, which stands for Trial Analysis Corporation. Bull isn’t a lawyer, and no, he doesn’t play one on television. He has several degrees, mostly dealing with how the human mind works. Bull is essentially a jury selection consultant. They call him the Jury Whisperer.

Here’s how it all works. He writes revealing psychological questions to ask prospective jurors. This reveals some personality trait that not only tells them if they might be sympathetic to their client, but what kinds of tactics will work best on them once the trial starts. He then uses the knowledge of his business partner, Marissa Morgan, played by Geneva Carr. She has written algorithms that allow them to select a “mirror” jury, who serve as representatives of the real people in the box. While he analysis the real jury during the trial, Marissa is observing the mirror jurors, who are watching the same trial via technology from the TAC base of operations. They communicate through earbuds, and when a mirror juror is on board with their narrative of the case, their monitor profile turns green. When they aren’t, their profile is red. So pretty much every red or green joke has been used up on the show before the end of the first season. Of course, they need more info on the jury pool than the traditional questionnaires might provide. That’s where two other teammates come into play. Both are ex-Homeland Security agents, so they know how to spy on folks. Danny James, played by Jaimie Lee Kirchner, has been there since Season One and is the team’s seasoned investigator. Not only does she share those Homeland Security contacts, but she’s got friends in the FBI as well as local law enforcement and even military intelligence assets. Her junior partner is the more emotional Taylor Rentzel, played by MacKenzie Meehan. Taylor isn’t quite the field investigator that Danny is, but she makes up for it by being the team’s tech guy. She’s the one who hacks, enhances, and manipulates the computers in the cases. None of this is actually on the legal end, but TAC’s golden rule has to be the ends justify the means.

Actually putting all of these resources to work are the two actual lawyers on the team. Benny Colon is played by Freddy Rodriquez and is hands down my favorite character in the show. He starts the season on the outs with his childhood buddy because he doesn’t feel respected enough to have real input in how he does his job. It doesn’t help that Bull’s ex-wife is Benny’s sister, and now they’re back together and trying to have a baby. So Bull’s a bit stressed this year. His first order of business is getting Benny back on the team. Of course, he does, so it’s not really the suspenseful season finale from the previous year, and I doubt there were any fans who didn’t see any of that coming. Rodriquez just knocks it out of the park. He’s the emotional center of the show. His lawyer skills are the glue that makes it work, and he often ends up giving us some of the comic relief. Benny’s gold on this show.

Benny’s backed up by Chunk, played by Chris Jackson. This is the character who has come the longest way since the pilot, and he’s also a very strong emotional support for the show. When he started he was mostly a former fashion designer who helped prep witnesses, mostly by making sure they looked good. Now he’s been going to law school and works at a law clinic at the school as a student attorney mostly for people who can’t afford the real thing. He might not have the book knowledge that his peers have, but he makes up for it with heart and determination. He gets to do two cases for the firm this season, and it’s obvious they are grooming him for a powerful one-two punch along with Benny. While I look forward to that, it’s a bitter-sweet situation, because I love Benny and would hate to see him get less screen time, but Chunk’s great too. It’s a good problem for the show to have.

The series has really started to cut back on the whole mirror jury material and is pretty much letting the audience take all of that for granted. I’ve been suggesting that from the start, because it was rather monotonous and took away from the drama and characters. This year they might have even taken things too far the other way. Newcomers might not even understand what’s up, because they skip over that part entirely now and go directly into the court stuff.

The format allows you to keep up otherwise. While there are character arcs that continue through, they do not dominate the stories or the episodes. You can dip in and out of the show with ease and can start right here. No need to wait until you catch up. For most of the characters the year provides some interesting moments. I already talked about Chunk moving into actually being a lawyer. Benny is getting some say and a little more independence, which is good, because Bull’s newborn child is making it hard for him to concentrate on the details.

Marissa is having issues at home and files for divorce this season and is learning how to stand on her own a little bit more. Several cases involve people from her past, so we get a bigger picture of her than any of the other supporting characters this season. Taylor is also growing. She ends up almost getting fired when she sabotages TAC’s meeting with a rich guy in order to force their hand to help a stripper who accuses him of rape. It’s an emotional moment and a real step forward for the character, who I think was the most underused since her arrival.

This season it’s Danny who was underused. She doesn’t really get her shining moment in any of the episodes. Of course, COVID-19 meant the final three episodes were never produced or aired. The hope is that they will be worked into he next season. Since the show doesn’t rely so much on continuity, the missing episodes aren’t as obvious as they’ve been on many shows I’ve reviewed this season. The only extra outside of a few deleted scenes was a season wrap-up that has all of the participants talking via streaming because of the pandemic. You do get 20 episodes on four discs and a chance to get ready for Season 5. We’ll start the year recovering from the halts in production everyone experienced and see how our first COVID season start goes. “I don’t think we ever had one of those.”

Gino Sassani is a member of the Southeastern Film Critic's Association (SEFCA). He is a film and television critic based in Tampa, Florida. He's also the Senior Editor here at Upcomingdiscs. Gino started reviewing films in the early 1990's as a segment of his local television show Focus. He's an award-winning recording artist for Omega Records. Gino is currently working on his 8th album Merchants & Mercenaries. Gino took over Upcomingdiscs Dec 1, 2008. He works out of a home theater he calls The Reel World. Favorite films: The Godfather, The Godfather Part II, The Body Snatcher (Val Lewton film with Karloff and Lugosi, not the pod people film), Unforgiven, Gladiator, The Lion King, Jaws, Son Of Frankenstein, The Good, The Bad And The Ugly, and Monsters, Inc.
Sherlock Holmes: A Game of Shadows (UHD Blu-ray) (4K) Stephen King 5-Movie Collection (Blu-ray)