Posted in: Disc Reviews by Gino Sassani on September 11th, 2020 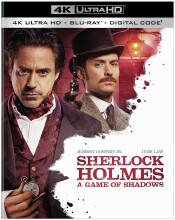 “I’m a consulting detective of some repute. Perhaps you’ve heard of me? My name is Sherlock Holmes.”

Today, Holmes has enjoyed a bit of a resurgence. There’s been a stage production of The Hound Of The Baskervilles. But most of us are more familiar with the action-adventure version from Guy Ritchie that took the box office by storm in 2009. The film featured Robert Downey, Jr. as the famous detective and Jude Law as a less conventional-looking Dr. John Watson. The film put Holmes and Watson in a far more violent and modern action story while still retaining the original period piece atmosphere. The film pulled in a nice $200 + million at the box office and was considered a fine amusement park ride by fans. A sequel was… well…elementary.

“The year was 1891. Storm clouds were brewing over Europe. France and Germany were at each other’s throats, the result of a series of bombings. Some said it was nationalists. Others, the anarchists. But as usual, my friend Sherlock Holmes had a different theory entirely.”

Dr. Watson (Law) is about to be married to his sweetheart, Mary (Reilly). Unfortunately for the poor man, Sherlock Holmes (Downey, Jr.) is in charge of the stag party. After a mysterious meeting with Holmes’ diplomat brother, Mycroft (Fry), the game is once again afoot.

For this installment of the franchise, Ritchie and his team pulled out the big Holmes guns. It’s Professor Moriarty (Harris) himself who is behind the series of bombings. It seems that the criminal mastermind is attempting to start a world war a full two decades ahead of schedule. He has two reasons. The first involves his ownership of several war industries in need of customers and the second is to play a deadly game of shadows with Holmes himself, by targeting the young newlyweds and involving Holmes into the game itself.

If you’ve seen the first film, expect even more of the same. This version of Sherlock Holmes owes more to Ian Fleming than it does to Sir Arthur Conan Doyle. The film pulls out all of the stops. It’s a globetrotting whirlwind across Europe and to some quite extraordinary vistas and set pieces. Noomi Rapace plays the film’s version of the Bond girl as gypsy Madam Simza Heron, who holds more than a few clues to the trail of breadcrumbs left by Moriarty. There’s plenty of action that includes mayhem on a train with an exploding train car. There’s a munitions plant that serves the perfect Bondesque climax, and even Moriarty himself looks more like an agent of SPECTRE than the more mundane criminal activities of his literature domain. It’s nothing less than global domination, of sorts. There’s no doubt that this is the most breathtaking version of the detective to ever reach the screen in more ways than one. The production values are through the roof between the exotic locations and the enormous set pieces.

Of course, even with the huge scope of the film, it always comes down to Holmes and Watson. Downey and Law have an advantage this time around. We’ve already been introduced to their take on the characters, so there is not the need to settle us in to their way of doing things. There is a much better sense of chemistry between the two, which I always felt was conspicuously lacking in their first film. It’s the only reason the film works. With all of the movie’s splendor and blockbuster budget, the only real connection to the source material we have is the relationship between these two companions. Ritchie’s smart enough to understand that and works hard to bring the vastness down to those important intimate moments that serve as the heart of the film. Add to that the wonderful villainy portrayed by Jared Harris, and now you have a tripod that holds the weight of all of that extravaganza. The three make it work, and there are moments, just a few moments, mind you, when you actually feel like you are indeed watching a Sherlock Holmes film.

Sherlock Holmes: A Game Of Shadows is presented in its original aspect ratio of 2.39:1. The ultra-high-definition 2160p image is arrived at by an HEVC codec with an impressive average bitrate of 65-70 mbps. The vistas are often quite striking, as are the castles and other set pieces that give the film such an expansive feel. There’s an obvious attempt to add a period feel to the piece by muting the colors a bit. There also tends to be a cold blue tint to much of the night scenes that fits many of the locations. So colors never really pop, but they do maintain consistency. There is also some brilliant texture to be found in places like the Holmes Baker Street flat. The costumes allow for some realistic textures, as well. Smoke from the train or settling from an explosion benefit from the HDR contrast abilities. Black levels are better here than on the first film, as the stylishness isn’t allowed to hinder the image presentation near as strongly.

The DTS-HD Master Audio 5.1 is not an upgrade and delivers exactly the same as the Blu-ray. That means the subs fall a little short, and the Hans Zimmer score doesn’t get to deliver like it could. The train scenes have particularly immersive aspects. From the wheels on the track to the cold breeze outside, you do feel like you’re on the train. Dialog cuts through just fine, and it’s a crisp and clean presentation, just not terribly dynamic.

The extra is only on the Blu-ray copy of the film.

Maximum Movie Mode: This is a little deceiving. It’s not the interactive actor-driven stuff this usually means. There are several behind the scenes segments that pop up when appropriate. You can view them separately via Focus Points.

This movie takes everything about the first and notches it up a few degrees. It’s definitely like putting an 11 dial on your amp. Of course, that’s not what Holmes purists were hoping to hear. Unfortunately, the detective has always been reinvented from era to era. The Universal films had Holmes become a Nazi fighter during World War II. It’s not as uncommon as you might think. It might not really be the kind of crime-solving you might expect, but Ritchie doesn’t slow down long enough for any of that to matter before it’s over. The ending is a take on one of the most famous Holmes stories, and it is leaving itself completely open for more. Like it or not, this is the Holmes we’ll be seeing for the foreseeable future. Once again, the game’s afoot, but “Are you sure you want to play this game?”

Gino Sassani is a member of the Southeastern Film Critic's Association (SEFCA). He is a film and television critic based in Tampa, Florida. He's also the Senior Editor here at Upcomingdiscs. Gino started reviewing films in the early 1990's as a segment of his local television show Focus. He's an award-winning recording artist for Omega Records. Gino is currently working on his 8th album Merchants & Mercenaries. Gino took over Upcomingdiscs Dec 1, 2008. He works out of a home theater he calls The Reel World. Favorite films: The Godfather, The Godfather Part II, The Body Snatcher (Val Lewton film with Karloff and Lugosi, not the pod people film), Unforgiven, Gladiator, The Lion King, Jaws, Son Of Frankenstein, The Good, The Bad And The Ugly, and Monsters, Inc.
Sherlock Holmes (UHD Blu-ray) (4K) Bull: Season Four