Posted in: No Huddle by Jeremy Butler on September 23rd, 2020 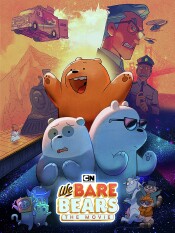 So, this film definitely was not my daughter’s cup of tea. In her defense, without the background of watching the Cartoon Network series that preceded this movie, it is hard to become invested in the film. Additionally, I think most of themes that were addressed in the film were a bit over her head. I think if I were to show it to her again in a couple of years, she might vibe with it better, but I’m not guaranteeing that. Based on my own research of the series, the film was intended to serve as the series finale for the television show that ended in 2019. Also, my daughter is more of a YouTube kid rather than Cartoon Network. And based off my own interpretation of the film, knowledge of the original series goes a long way toward emotionally investing in this movie. In order to help you better understand the film, I will provide you with some background based on my own independent research into the television show that facilitated this aforementioned movie.

We Bare Bears follows three adoptive brother bears: Grizz, Pan-Pan, and Ice Bear. The bears attempt to integrate with human society, such as by purchasing food, making human companions, or trying to become Internet famous. This integration comes with some complications, primarily the struggle to reconcile the civilized nature of humans and their own animal instincts. The bears are aided in their efforts by child prodigy Chloe Park, bigfoot Charlie, internet sensation Koala Nom Nom, park ranger Tabes, and produce saleswoman Lucy.

This brings us to the premise of the animated movie. While rushing out to be the first in line for the opening of a Canadian poutine food truck in the San Francisco Bay Area, the bears unwittingly wreak havoc along the way. This incites a barrage of complaints from its San Francisco residents. Wanting to make up for it, and also jealous of the public admiration received by celebrity koala Nom Nom, Griz, Pan-Pan, and Ice Bear set out to record the “ultimate viral video.” However, this plan too goes awry, causing a massive city blackout.

Due to the public’s demands for their accountability and the police’s hesitation to level severe punishment, Wildlife Control Agent Trout (Marc Evan Jackson, Brooklyn Nine-Nine) takes over and convinces the assembly to detain the bears and relocate them to a wildlife preserve. In order to avoid being separated, the bears, with the help of their friends, attempt to make their way to the Canadian Bear. What follows is an adventure intended to teach the audience of the value of uniqueness and family.

I found the film to be a bit kooky when it came to its comedy, but overall very sweet, with the potential to address several systemic issues that exist in society. Within its 69-minute runtime, this film speaks to themes of acceptance, family separation, and racial discrimination. These same themes are addressed in the series as well, but in a more lighthearted manner than depicted in the film. Series creator Daniel Chong reportedly meant for both the show and film to serve as an allegory for the feeling of being a minority in America. I believe that this message gets across very well; the audience watches as three bears that originate from separate parts of the world are bonded like brothers, further reflected in their vow to be “Bros for Life.” The film really does have application for educating young people on the importance of tolerance and acceptance. During these I attempted to clue my daughter into these aspects. This was also around the time that I saw her eyes glazing over, and she began to nod off. As I previously mentioned, she is more of an adventure girl, and just reaching the age where she will learn the importance of cultural enrichment.

She did wake up and refocus towards the end of the film, around the time of the forest fire. This showed the importance of teamwork as the heroes were forced to find away to save themselves. This featured an ode to the television series with the most recognizable act of the series, the bear stack. This of course brought about a series of questions about bear stacks. She seemed intrigued after this, but of course, this was near the film’s close. I think if she had some knowledge of the show beforehand, she would have enjoyed it more.

Despite not having a lot of knowledge about the film beforehand, there were many elements that I found to be beneficial as a parent. It is difficult to walk the line between entertainment and education, but I do believe that this film does it well, even though my own child may have been too young to fully grasp it. I fully expect to be showing her this film again in the future, perhaps after she catches up with the original series, so that she can receive the full benefit of what the movie tries to impart. Despite the movie serving as the series finale for the television show, it does not appear to be the end of the franchise as a spin-off show depicting the bears as cubs is believed to be in the works.

Jeremy Butler is a film school graduate of the International Academy of Design and Technology. He is been writing for Upcomingdiscs since 2012; however, movies have played a big part of his life for much longer. Favorite genres include horror, science fiction/fantasy, and comedy. Favorite movies are V for Vendetta, Boondocks Saints, Kiss Kiss Bang Bang, and The Godfather.
Magnum P.I.: Season Two Blood Quantum (Blu-ray)