Posted in: No Huddle by Brent Lorentson on September 25th, 2020 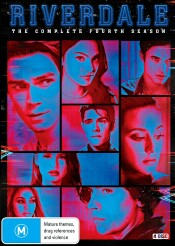 You have to go back to the early 40’s for when Archie, Jughead, Betty and Veronica first appeared in comic book form. Over the years, their characters have changed with the times, though the town of Riverdale always seemed to maintain an innocent charm where nothing bad ever seemed to happen. Well, that is until recently, where the comics took a shift and thrust our characters into various scenarios, one even including Riverdale being overrun by zombies. These changes occurred when Roberto Aguirre-Sacasa took over the brand, and now he has brought the town of Riverdale and its inhabitants to the small screen for the CW network.  Though this iteration differs from the early days of the Archie comic universe, all the familiar characters are here, and they are showing us the shady underbelly of Riverdale that I’m so glad we are getting a glimpse at, one episode at a time.

Following the mess that was Season 3 of Riverdale, I’m curious about what went down in that writers’ room.  I know I wasn’t the only one disappointed by how far off the rails the show seemed to go with the deranged D&D-esque game of Griffins and Gargoyles, the return of the Black Hood, and then the cult on “The Farm”.  While I’m not against these ideas, they always seemed to be too farfetched, even for the absurd world of Riverdale.  Then the show got rocked with the curveball of Luke Perry passing, and honestly, I wasn’t sure what could happen next. Could the show bounce back to its fun bubblegum/noir roots, or would it just continue to spoil?

The season opens up with Archie (K.J. Apa) getting struck by the news that his dad, Fred Andrews (Luke Perry) has been killed in a hit-and-run. Sure, this may seem like a simple cop-out way for the show to handle the passing of one of its actors, but this episode is hands-down the best episode the series has produced.  In a lot of ways this is really the most “pure Archie” from the original comics the show has given us.  I absolutely loved the heartwarming sendoff the show gave to Fred Andrews, and it nicely sets up some emotional drama for later down the road.  This episode shows how good Riverdale can be. I don’t want to spoil anything from it. but I will say don’t be surprised if it manages to squeeze few tears out of you.

The next couple episodes seems to be tying up loose ends from the last season as we see Betty (Lili Reinhart) along with her newly found half-brother and FBI agent, Charles (Wyatt Nash) attempt to find her mother and bring down “The Farmies” once and for all. It’s a silly resolution. but it’s just nice to see that this absurd plot is done with (well. at least mostly). As for Jughead (Cole Sprouse), it seems things have taken a turn for the better as a private school comes looking to bring him into their writing program and finds out one of his instructors is a ghostwriter for a YA mystery book series he’s adored his whole life.  It wouldn’t be Riverdale without a little mystery and murder, and this time the focus is on the YA books that are basically The Hardy Boys and Nancy Drew, but under a different guise.  A contest is announced to the students in Jughead’s class, where the writer chosen will be the next writer for this YA franchise. All the student has to do is come up with “The Perfect Murder”. It seems a student or a member of the faculty is taking the challenge seriously, and people are going missing and winding up dead on campus.

I absolutely had a blast with this storyline for the show, seeing Jughead and Betty playing amateur sleuths while having to outwit students and faculty that could match their wits made this a lot of fun.  Sure, there is the “Why is Jughead dead” tease that is hinted at from Season 3’s finale and is brought up in all the episodes of Season 4 like a stinger at the end of each episode.  This again is part of the fun of this season, and it’s great that the writers were able to bring this show back on track.

Another fun aspect of this season is Cheryl Blossom (Madelaine Petch). In Season 3 she just seemed poorly written and was just there to deliver bad dialog while being just background fodder the writers seemed to not know what to do with. In Season 4, we get the Cheryl we’ve come to love, the petty, brash, beautiful and dangerous vixen that steals just about every moment she has on screen. This is honestly my favorite character on the show, and I do wish they gave her so much more, but this season they seemed to finally utilize her for all her strengths. In one of the seasons more macabre storylines, the relationship with her brother’s corpse manages to be creepy and sweet. Then you have her relationship with her remaining family and her girlfriend TT (Vanessa Morgan), which gives us more layers to this character, but honestly the most fun to watch is the feud between Cheryl and the new principal, Mr. Honey (Kerr Smith).  Mr. Honey seems to be a thorn in everyone’s side at Riverdale High, and how this all plays out, well, it definitely made it a fun ride this season.

As for Archie, he’s struggling to figure out what to do with his life now that his dad is gone.  He’s still at the youth center, and for a brief time we seem him attempting the vigilante fighting again, but that comes to an end somewhat quickly.  With it looking like he may not go to college, a lot of the season is Archie just trying to find himself and coming to terms with the loss of his dad.  In some ways it seems like the character is benched a tad this season, but when his character is needed, he is definitely the anchor for the show.

Finally we have Veronica (Camila Mendes), and of course the ongoing feud with her father, Hiram Lodge (Mark Consuelos).  This is the weakest part of the show and just seems silly. I really hate the idea that a senior in high school is allegedly running a speakeasy, and then this season she gets into the rum making and selling business.  Then the idea of her having college interviews at her speakeasy and them being impressed by her rum business. Sure, all the actors are well into their 20’s, but I just don’t believe a high schooler could ever start her own rum business and literally no legal authorities come after her. This silly feud between Veronica and her dad is just annoying and going in circles, and what’s more frustrating is it prevents allowing the character of Veronica to evolve. Really she isn’t any different from who she was in Season 1, yet all the other characters around her have changed plenty.

My other complaint for this season is the musical episode. The musical episode last season was awful, and this season it managed to be worse. I understand it wants to appeal to the LGBQT crowd, but this episode was just bad and really threw off the momentum the show had going for it.  Speaking of momentum, the season being only 19 episodes and ending three episodes short is hugely disappointing.  There’s still the David Lynchian mystery with the video cassettes that needs to be resolved along with prom and graduation, things that have been filmed but they are choosing not to air till 2021 because of COVID 19.  Sure, the season ends with a proper cliffhanger, but having to wait so long for these answers is cruel.

At the end of the day, will we ever see Riverdale being nominated for an Emmy or Golden Globe?  This is highly unlikely. Not every show needs to be aiming for critical prestige.  The show is a fun teenage romp through a dark noir world filled with sex, lies, murder, and singing.  This is the kind of junk food for the mind that is fun to binge and will actually keep you guessing on how things will turn out.  This was easily my favorite season of the show, even if we didn’t get things wrapped up nicely.  The writers stepped up their game, and seeing each episode getting a bit more style injected into them is a good thing to see, and it gives me hope for what things maybe around the corner for Season 5.

Brent Lorentson is a horror writer and film critic based out of Tampa, Florida. With a BA in Digital Film, he co-wrote and co-directed Scavenger Hunt. His short stories have appeared in various horror anthologies. In 2019 his short script Fertile Blood will be a part of the anthology horror film Slumber Party. He is currently working on his first novel A Dark and Secret Place set to be released in late 2019. Favorite Films: Taxi Driver, Fight Club, I Saw the Devil, The Wild Bunch, Dawn of the Dead, A Clockwork Orange, Pulp Fiction, Heathers, The Monster Squad, and High Fidelity.
DC’s Legends of Tomorrow: The Complete Fifth Season (Blu-ray) Most Wanted (Blu-ray)