Posted in: Disc Reviews by Brent Lorentson on October 1st, 2020 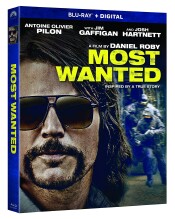 Hollywood is no stranger to films about citizens being falsely accused in a foreign land for crimes they didn’t commit or having the charges overly exaggerated. Midnight Express is perhaps the best of the bunch, and in the 90’s there was Brokedown Palace and Return to Paradise.  I’m somewhat of a fan of these films, but the problem is that they become a bit formulaic, and really, they are already an offshoot of the “wrongly convicted” prison dramas, so it’s no surprise that we really haven’t seen a film like Most Wanted in a while despite it being based on a true story.  Thankfully Most Wanted brings a new take to the table as it shows us how far some dirty cops are willing to go in an attempt to get a high-profile bust.

Most Wanted is about Daniel Leger (Antoine Oliver Pilon), a young, struggling heroin addict who is getting by in his day-to-day life by getting high and pulling small crimes to support his habit. I’m not the type to sympathize with an addict, but if Leger has any redeeming qualities, it’s that he doesn’t seem to want to harm anyone and he’s just looking for someone to accept him for who he is. He finds this acceptance in Glen Picker (Jim Gaffigan), a small-time drug dealer who employs Leger to help out on his “fishing boat”.  The relationship between Leger and Picker at first seems like it could be a good thing; that is until we discover Picker has motives of his own for taking Leger under his wing. This eventually leads to Picker introducing Leger to a potential big client to help in negotiating a drug deal in Thailand. Just how does this young Canadian guy have massive connections in a foreign land? Well, that’s where a simple misunderstanding steamrolls into something Leger has to figure out under the threat of being killed.  What’s worse is that Picker has manipulated Leger to do this deal with undercover cops just so he can go about running his business and his life as he pleases.

Because the film is told in a nonlinear fashion, there is also Victor Malarek (Josh Hartnett), an investigative journalist who is in need of a juicy story to keep his job at the paper he is working at despite his editors not wanting to deal with his antics. Malarek is a husband and a new father, and though he is struggling to make his family a priority, he knows he needs to break a big story to keep food on the table. This is when he finds the story about Leger being held in a prison in Thailand.

The problem with the nonlinear storytelling is we know Leger will end up in prison, and this pretty much undercuts the drama building when we see all the effort being put together to make a drug deal go down in Thailand.  The other issue is as we are seeing Malarek uncover this story; while it does have some thrilling moments, it takes away from really expressing how much of Leger’s life has been ruined by these dirty cops and how their mistakes left him to rot in this prison for years. There’s no race to free Leger from his cell. Despite all the impending doom you throw at Leger, it doesn’t work, because you know he lives long enough to at least meet up with Malarek.  Basically the result is a decent thriller that just lacks emotion, and that is something that could have elevated this film rather than make Malarek seem so detached.

What works for this film are its performances. Gaffigan continues to impress me while he continues to play some low-life characters in some smaller films over the years, and I’m hoping he’ll be able to cross over into bigger-budget films, because he’s definitely an untapped talent that I’m looking forward to seeing where his career will go. As for Leger, he is tasked with carrying the film on his shoulders, and with his character being an addict, well, that’s a more difficult challenge to win over an audience, but he does a great job here. Then there is Hartnett. This is a guy I’ve always liked since he was Zeke in The Faculty. Hopefully more roles like this will come his way. He’s a great leading man who just hasn’t been given the right roles, and I just don’t see how Hollywood keeps overlooking this guy’s talent.

Little films like Most Wanted are becoming a rarity in Hollywood. It seems all the studios want to generate are big tent-pole films or low-budget pieces that may make it to a few big screens but really are forced to survive on a streaming service. I liked this movie. It’s a story we’ve seen before, but the performances are what kept me riveted.

Most Wanted is presented in the aspect ratio 2.39:1. The 1080p image is arrived at with an AVC MPEG-4 codec at an average of 36 mbps.  The presentation of this film is impressive despite it not being a big blockbuster film.  Most of the film has a cooler blue tone, while everything that is in Thailand and especially the prison has a yellow and warmer tone. The Canadian landscapes and shots on the water look great with a wide depth of field.  The detail that is picked up in the close-ups is nice as well.  There were no compression issues, and the black and darker levels are nice, delivering a nice separation. This is most noticeable in the arrest sequence in the final act of the film.

The DTS-HD Master Audio 5.0 track is more impressive than you would expect considering this is a relatively low-key film. Some of the detail is outstanding, like when a line of coke is being snorted to the ambient sounds in the new room down to moments when synth-heavy 80’s music plays. At the start of the film there is a brief car chase, and towards the end there is a brief action sequence; in these moments we get some nice use of the sound design that makes it an immersive experience.  The dialog is clean and crisp throughout. One of the better moments is the lack of subtitles in parts like in the Thai courtroom so we can feel what the character is feeling, not knowing what is being said while his fate is being determined. A solid audio track for a small-studio thriller.

While this film isn’t perfect, it has a great cast and is a fun way to spend two hours.  Sometimes your brain just wants a good story that isn’t dependent on CGI.  This is one where you’ll get caught up with the solid performances, but I doubt this will make anyone’s greatest hits list.

Brent Lorentson is a horror writer and film critic based out of Tampa, Florida. With a BA in Digital Film, he co-wrote and co-directed Scavenger Hunt. His short stories have appeared in various horror anthologies. In 2019 his short script Fertile Blood will be a part of the anthology horror film Slumber Party. He is currently working on his first novel A Dark and Secret Place set to be released in late 2019. Favorite Films: Taxi Driver, Fight Club, I Saw the Devil, The Wild Bunch, Dawn of the Dead, A Clockwork Orange, Pulp Fiction, Heathers, The Monster Squad, and High Fidelity.
Riverdale: Season 4 Genesis II / Planet Earth 2-Film Collection (Blu-ray)