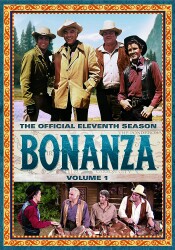 Three-time widower Ben Cartwright (Greene) runs his famous Ponderosa Ranch with the aid of his three grown sons from three different mothers. There’s Little Joe (Landon), Adam (Roberts), and Hoss (Blocker). Set some time in the mid 1800’s, this long-running series followed the family’s many exploits. In the late 1950’s, westerns accounted for six of the top ten programs on TV. Only Gunsmoke had a longer run than Bonanza. From 1959 to 1973, Ben Cartwright and his boys rode across the small screen. Years later in syndication the series re-emerged as Ponderosa, and a handful of TV movies continued the tale into the 90’s.We never have grown tired of the genre that gave us such heroes as John Wayne and Clint Eastwood.

The season has some memorable episodes, to be sure. The Witness finds the Cartwrights protecting the witness of a murder, only to find out they may be protecting the wrong person. Another witness could be the end of the rope for Candy when he’s accused of murder on the eyewitness testimony of a young boy. It happens in The Silence At Stillwater. Can the Cartwrights jog the kid’s memory before it’s too late? Hoss gets to find out what it’s like to be in charge in A Lawman’s Lot Is Not A Happy One. He gets to be acting sheriff and finds out even the simplest of problems might not be so easy to resolve. During a long stage ride to the Pondarosa, Hoss is mistaken for a famous outlaw because a local tall-teller has spun one of his yarns. In Dead Wrong, a bit of storytelling could be the end of Hoss. In Danger Road, Ben needs help hauling some large timber. He’s about to hire a man until he learns they served on opposite sides during the Mexican War. Can Ben overcome his personal feelings and get the timber hauled? In The Long Way To Ogden, Ben helps the small ranchers stop a meat packer from buying the rail line and freezing out all of the competition. Ben is shot and injured in a small town in Mexico. When he shoots his attacker, he must now contend with the attacker’s son. He might not have a leg to stand on, and it’s all in Decision At Los Robles. Finally a little levity in Caution Easter Bunny Crossing. Hoss takes on the costume of the iconic rabbit to entertain kids at an orphanage and ends up dealing with an outlaw gang while dressed in the silly attire.

CBS started to pack in some extras in the previous release, but this one goes back to a bare-bones kind of title. There are promos and original ads, but very little else in this collection. Again the season is split into two releases. Look for a combo pack and you’ll get all 28 episodes on seven discs. Do I wish CBS would release them together? Absolutely. But you might put up with it to have these classic shows on your video shelf. Right now we’re all looking for some classic stuff to fill our days. ” ‘Cause we ain’t got nothin’ else to do.”

Gino Sassani is a member of the Southeastern Film Critic's Association (SEFCA). He is a film and television critic based in Tampa, Florida. He's also the Senior Editor here at Upcomingdiscs. Gino started reviewing films in the early 1990's as a segment of his local television show Focus. He's an award-winning recording artist for Omega Records. Gino is currently working on his 8th album Merchants & Mercenaries. Gino took over Upcomingdiscs Dec 1, 2008. He works out of a home theater he calls The Reel World. Favorite films: The Godfather, The Godfather Part II, The Body Snatcher (Val Lewton film with Karloff and Lugosi, not the pod people film), Unforgiven, Gladiator, The Lion King, Jaws, Son Of Frankenstein, The Good, The Bad And The Ugly, and Monsters, Inc.
The Vanished It’s a Wonderful Life (Blu-ray UHD) (4K) Steelbook