Posted in: No Huddle by Brent Lorentson on November 11th, 2020 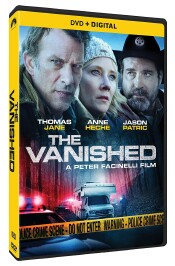 It’s not uncommon for actors to want to take that leap from being in front of the camera to taking on the mantle of being director.  There are some big names who have made that transition successfully. Ben Affleck, Mel Gibson, George Clooney, Peter Berg, and Clint Eastwood are some of the bigger names that I can name off the top of my head. For The Vanished, Peter Facinelli is adding his name to that list. So how does he fare in this low-budget psychological thriller?  While I wouldn’t put him in the same league as those previously mentioned, Facinelli does show some promise, but the film’s greatest weakness is its script, which Facinelli also is credited for writing.  This is one of those instances where I just wonder if someone else took a pass at the script how much the film could have improved, because this was a frustrating film to sit through.

Paul (Thomas Jane) and Wendy (Anne Heche) have decided to take a family vacation with their daughter, and very quickly this trip goes horribly awry.  They’ve taken an RV to a quiet camping ground, and it’s not long before their daughter manages to disappear without a trace.  It doesn’t take long for the film to introduce a few characters where this becomes a simple whodunit scenario.  There is the wounded escaped prisoner, the nearby couple that is struggling to have a kid, and there are the creepy employees at the camp.  In comes the town sheriff, played by Jason Patric, to solve the case.

The first act of this film works well enough, but then we see Paul and Wendy kill a person who may or may not be the escaped criminal, and this is where everything begins to fall apart. It’s here where every character just starts making bad decisions that are smack-your-head-worthy. It’s not just the parents making bad decisions; I mean everyone, down to the cops, camp employees, and other campers. Before long Paul and Wendy have amassed a decent body count, and still the sheriff is too drunk or inept to even bother asking them if they have a gun or if they could be involved in any way.  Don’t worry, it gets even more ridiculous by the time it moves into the third act, where somehow this film manages to be so absurd and exasperating that you don’t want this couple to ever get their daughter back.

Despite the numerous flaws in the story, Facinelli does manage to make this at least a watchable mess. Only in the opening in the film did I have some issues with some camera shots, but the rest of the film came together.  I liked the yellows and the fall look of the film, but what was lacking was a sense of tone. There’s a lack of suspense and urgency throughout the film, and despite some dark turns in the story we still never feel any ominous threat. For instance, there is a moment where Paul and Wendy are on a boat in the middle of the lake and they want to question them about their daughter. After all, there is also a killer out there, and it can be anyone, so this should be a great opportunity for suspense. Instead it fails in every way.

What somewhat saves the film is the ending. Though it may not make a lot of sense, it is so absurd that it kind of works for this film.  I didn’t hate the film, but I doubt I’ll ever find a reason to watch this one again.  The performances from Jane, Hache, and Patric are enough to keep us engaged, but this is a far cry from their best work. As for Peter Facinelli, maybe he was just too close to the material to see the errors that needed adjusting, but he does show some potential if he manages to learn from these mistakes.  With the lack of new content out there, if you came across this on a streaming service and you’re a fan of the cast, maybe you’ll enjoy this one, but I wouldn’t try too hard to search this one out.

Brent Lorentson is a horror writer and film critic based out of Tampa, Florida. With a BA in Digital Film, he co-wrote and co-directed Scavenger Hunt. His short stories have appeared in various horror anthologies. In 2019 his short script Fertile Blood will be a part of the anthology horror film Slumber Party. He is currently working on his first novel A Dark and Secret Place set to be released in late 2019. Favorite Films: Taxi Driver, Fight Club, I Saw the Devil, The Wild Bunch, Dawn of the Dead, A Clockwork Orange, Pulp Fiction, Heathers, The Monster Squad, and High Fidelity.
Cats & Dogs 3: Paws Unite! Bonanza: The Official Eleventh Season (vol. 1 & 2)