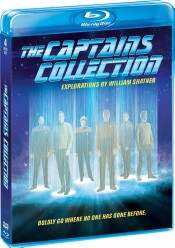 I think I see your problem. You have this list. It’s a list of people you need/want to buy a Christmas gift for. The trouble is that they’re into home theatre, and you don’t know Star Trek from Star Wars. You couldn’t tell a Wolf Man from a Wolverine. And you always thought that Paranormal Activity was something too kinky to talk about. Fortunately, Upcomingdiscs has come to the rescue every Christmas with our Gift Guide Spotlights. Keep checking back to see more recommendations for your holiday shopping. These gift guides ARE NOT paid advertisements. We take no money to publish them. With conditions as they are, shopping won’t be easy this season. The nice thing about discs is that they’re so easy to get from places like Amazon that you can give a great gift and stay perfectly safe while you do it. Shout Factory delivers a little bit of William Shatner’s world in The Captains Collection. It’s a collection of four documentaries from the Enterprise Captain himself. Here’s a look inside:

“Boldly go where no man has gone before.”

Is there anyone out there who hasn’t noticed that William Shatner the actor has become William Shatner the character over the years?  Give the man some credit for finding ways to reinvent himself. After Star Trek he was the only actor to find himself another regular television character and shake the typecasting that most actors in the franchise have been victimized by. When TJ Hooker was gone, he found a few other shows and ways to take advantage of what could have been fleeting fame. By the time he did Boston Legal, he had completely reinvented himself as a somewhat humorous character and wonderful mate for James Spader. But all along there was and always will be more than a little Captain Kirk in the actor. And over time the two began to meld into a being that has been the fodder for jokes for most of the world. Shatner’s laughing, too, but not in the way you might think. Shatner’s been laughing all the way to the bank.

Shatner visits with each of the Star Trek captains. He finds Patrick Stewart comfortably at home in England where they take a tour of the extensive grounds and talk philosophy. Next on the list it’s Avery Brooks, who comes across as pretty much insane. Even Shatner agrees, making fun of the actor at a convention appearance in the film. Brooks sits behind a piano. He plays quite well, but he interweaves music and crazy phrases while Shatner actually feeds the mania and plays along for laughs. Brooks reminded me of an old interview I have with Geraldo Rivera interviewing Charlie Manson. He goes off on crazy tangents that I just never did understand. On the New York Stage he catches up with Kate Mulgrew, who talks about her love for the theater. On a ranch he sits down with Scott Bakula, who seems to be quite grounded and having a lot of fun with the interview. Finally he sits on a street corner just outside of Paramount Studios with Chris Pine, with whom he spends the least amount of time. The film also features short segments with other Trek personalities to offer their perspectives.

While Shatner does pay some tribute to the other actors, he never misses a chance to turn the focus back on himself. At one point it looks like Patrick Stewart is fighting to stay awake while Shatner delivers a long monolog that basically says that while researching Stewart he had an epiphany of just how great he (Shatner) really was. Very little of the actual film is spent sitting down with the other captains. There are appearances with Shatner with various convention crowds. And even when he is sitting with the others, the conversation mostly ends up being about Shatner. The end offers some philosophical enlightenment he appears to have found on his journey. My journey should have come equipped with a feather pillow and a down comforter.

Part of his newfound shtick has been putting together these “films” that explore the mythology of Star Trek. As we climb ever closer to the 50th anniversary, expect Shatner to continue to cash in. His latest gets its name from an old Saturday Night Live skit in which Shatner admonishes some diehard fans at a convention to do just that. It’s still one of the best SNL skits in decades, and it’s an appropriate opening for this release. Unfortunately, we don’t get the entire skit. We only get enough for Shatner to deliver the titular line.

The piece starts with some really cool animation work for the opening title credits. Sure, it’s over the top, but if you buy a documentary from William Shatner, you were already ready for it. The piece takes a behind-the-scenes look at the 45th Trek anniversary convention in Vegas. It sports the largest group of vendors and attendees in the Trek convention circuit. Apparently 100 celebrities were on hand. You get to see some of the prep work that goes into one of these events. Of course, there’s plenty of footage of the attendees, particularly those in costume.

We get a close look at some of the attendees who share their love for the franchise with us. Many were influenced in life-altering choices because of the show. We’re talking anything from careers to spouses. Many are inspired and some overcome tragic circumstances because of the show. Those include the heartwarming story of Captain Dave. We met him on Shatner’s Captains documentary. He was a young boy who suffered from debilitating muscular disease. He was wheelchair-bound and could not really speak much. Trek became his escape from that harsh reality, and his mother got him to many events. He got to mingle with pretty much all the Trek big shots. Unfortunately, he passed by the time the shoot was finishing up.

Shatner also spends time with a professor in front of a fire while they discuss the philosophy of mythology and how all of this fandom experience ties in. It’s a bit new-age, and it gives Shatner a chance to deliver his practiced reactions and thoughts.

While there isn’t much new here and there have been documentaries on the Trek convention world, it’s a harmless hour where the fans get to be the focus for a little while. There’s about 25 minutes of bonus footage to round out the release. Some of the fans have more interesting stories than the stars, so this is the kind of thing a fan can’t resist checking out. Trek’s not going away any time soon. Here’s that wacky look at the weirdness that is Star Trek fandom. “They’re out there.”

This isn’t really a full documentary. It contains a series of episodes on each of the actors featured in the original documentary. I consider this more like a bonus-footage extra, but it’s a nice edition with plenty more banter between Shatner and the rest of the captains.

Chaos On The Bridge:

This rather odd entry deals with the development of Star Trek: The Next Generation. It’s pretty clear that Shatner has an ax to grind here, and it disappoints me that he treats Gene Roddenberry so poorly throughout. It’s a mixture of interviews with people who worked on The Next Generation and these crazy caricature drawings that appear to be intended for dramatic effect. I don’t doubt that some of it is true. Gene was in the later stages of his life by this point, and there’s no doubt he might have made a lot of mistakes along the way. I thought it was poor taste to take such a shot at the man who literally created the character of William Shatner that he enjoys today. Shatner has made tens of millions of dollars because of Gene, and I honestly wish this piece wasn’t a part of the collection.

When I first heard of this collection, I was looking forward to seeing it. It appeared a bit out of character for Shatner to not only acknowledge these other commanding actors, but now we were going to see him sit down with each and pay tribute to them. He still manages to make it about himself, and that’s OK. That’s the “character” that he plays now. Like Adam West, Shatner has created this persona called William Shatner, and we all know what to expect from him. Then he bashes the Great Bird of the Galaxy. Sometimes my wife tells me I should have known better and have only myself to blame for being disappointed in the result. When she’s right, she’s right. “You can beam me up, just not yet.”

Gino Sassani is a member of the Southeastern Film Critic's Association (SEFCA). He is a film and television critic based in Tampa, Florida. He's also the Senior Editor here at Upcomingdiscs. Gino started reviewing films in the early 1990's as a segment of his local television show Focus. He's an award-winning recording artist for Omega Records. Gino is currently working on his 8th album Merchants & Mercenaries. Gino took over Upcomingdiscs Dec 1, 2008. He works out of a home theater he calls The Reel World. Favorite films: The Godfather, The Godfather Part II, The Body Snatcher (Val Lewton film with Karloff and Lugosi, not the pod people film), Unforgiven, Gladiator, The Lion King, Jaws, Son Of Frankenstein, The Good, The Bad And The Ugly, and Monsters, Inc.
Holiday Gift Guide Spotlight: The Alfred Hitchcock Classics Collection Holiday Gift Guide Spotlight: CBS – Mission: Impossible: The Original TV Series On Blu-ray