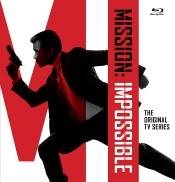 I think I see your problem. You have this list. It’s a list of people you need/want to buy a Christmas gift for. The trouble is that they’re into home theatre, and you don’t know Star Trek from Star Wars. You couldn’t tell a Wolf Man from a Wolverine. And you always thought that Paranormal Activity was something too kinky to talk about. Fortunately, Upcomingdiscs has come to the rescue every Christmas with our Gift Guide Spotlights. Keep checking back to see more recommendations for your holiday shopping. These gift guides ARE NOT paid advertisements. We take no money to publish them. With conditions as they are, shopping won’t be easy this season. The nice thing about discs is that they’re so easy to get from places like Amazon that you can give a great gift and stay perfectly safe while you do it. CBS has remastered the entire seven seasons of Mission Impossible and released them on this impossibly affordable collection.

Mission Impossible didn’t really enter into its by now famous format until this, the second season. The IMF team was run by Daniel Briggs, played by Steven Hill. Hill was never really happy and left after the first season, citing a refusal to work on the Sabbath as his reason for leaving. While Hill was never bad in the role, his departure was our gain. Peter Graves immediately stepped up as the iconic Mr. Phelps, and Mission Impossible as we know it was born. I should add a word of caution and say this is really nothing like the films which have become big-budget vehicles for Tom Cruise over the last decade or so. This was not an explosive f/x or stunt-driven show. The team managed their impossible missions with cunning and guile. The team was necessarily eclectic in nature. It featured Martin Landau in his signature role of Rollin Hand. Hand was very much akin to Martin Ross and his role in The Wild Wild West. He was a master of disguise. He could imitate almost anyone in very short order. Barney Collier was the gadget man, played by Greg Morris. Cinnamon Carter was the model and the team’s chief seductress and was played by Landau’s real-life wife Barbara Bain. Finally, the muscle was supplied by Willy Armitage, played by brute Peter Lupus. Together they took on missions that the government could not be officially a part of. They were always admonished that should they be caught “the secretary would disavow any knowledge” of them. Usually they were sent somewhere to put some evil mastermind out of business. Their tactics ranged from scams to outright theft. Sometimes they were a rescue team, while other times they would infiltrate a group of bad guys. There were certainly cold war elements to the whole thing. The opening segment of each episode was television history. A hidden tape recorder would give Phelps his assignment with the warning that the recording would self-destruct in five seconds. The tape and usually the recorder as well went up in a puff of smoke leading to the famous fuse and theme. Before we knew it, we were off to save the world one week at a time.

Leonard Nimoy joined the team in season four as Paris, who also had a skill for disguise. He was a magician, so his sleight-of-hand skills came in handy. Nimoy certainly added some fresh air to the show and was an immediate boost to the ratings. He stepped into the role when Star Trek ended its abbreviated five-year mission. Mr. Spock was already an iconic character, and Nimoy was eager to step out of the pointed ears and tackle a new role in the hope of avoiding being typecast. Now how illogical was that? The fourth season did provide us with some great stories, to be sure.

In the fifth season, Leslie Ann Warren joined the cast, in essence replacing Barbara Bain, who left with her husband after the third year. While it may sound sacrilegious to the show’s purist fans, I found her character to be a far better one. She not only looked much better, but she was a far better actress, and her role was more rounded and complete. Another strong addition to the cast would be western film icon Sam Elliott as Dr. Doug Robert. He would supply medical expertise in the missions. Elliott has always been a fine actor, and this role was no exception. Sadly, neither of these two new characters would last more than a year.

I was impressed with the look of the series. It was produced, along with Star Trek, by Desilu Productions, and they put a lot into production values. That’s why the Trek episodes look so good on Blu-ray. Mission Impossible isn’t quite so brilliant, but this is a very good representation of the show with tons of detail.

You’ll notice so many Star Trek guest stars throughout the show. It seems there isn’t a single episode in the early seasons that didn’t include a Trek guest star. That was because the shows shared production crew including casting. I also enjoyed the first season with Steven Hill. These were not included in the original syndicated package on television and went unseen for decades. It was decided to only market the Peter Graves episodes. But you’ll find it all here. No extras, but you get 171 episodes on 47 discs. I’m not a fan of the packaging. It’s those pull-out cardboard slips that can often damage a disc. The set deserved better. You can solve the problem by putting them in plastic cases of their own. It’s worth the expense.

Since I began watching this series again to review, I had been eagerly awaiting the arrival of Nimoy as The Amazing Paris. Mission Impossible might be one of the earliest television shows to demonstrate that a series can lose not one but two important cast members and continue on strongly. The revolving door, started here, would continue for the remaining years of the show. While I often suggest you begin at the first season of a series, Mission Impossible doesn’t require that kind of recommendation. You can easily begin here and enjoy the episodes without any problem. This stuff’s better than the Tom Cruise films. “Look, after all we’ve been through together, you know you can trust me.”

Gino Sassani is a member of the Southeastern Film Critic's Association (SEFCA). He is a film and television critic based in Tampa, Florida. He's also the Senior Editor here at Upcomingdiscs. Gino started reviewing films in the early 1990's as a segment of his local television show Focus. He's an award-winning recording artist for Omega Records. Gino is currently working on his 8th album Merchants & Mercenaries. Gino took over Upcomingdiscs Dec 1, 2008. He works out of a home theater he calls The Reel World. Favorite films: The Godfather, The Godfather Part II, The Body Snatcher (Val Lewton film with Karloff and Lugosi, not the pod people film), Unforgiven, Gladiator, The Lion King, Jaws, Son Of Frankenstein, The Good, The Bad And The Ugly, and Monsters, Inc.
Holiday Gift Guide Spotlight: Shout Factory – The Captains Collection Ben 10 Versus The Universe – The Movie