Posted in: No Huddle by Jeremy Butler on December 7th, 2020 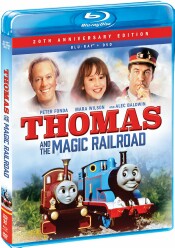 If you were hoping to see if this film would get the Nalyce stamp of approval, I must apologize, because this was one that she just flat out did not want to watch. I mean, she didn’t even want to give it a chance. In her defense, I do believe that she has aged out of this type of content. Kids, they grow up so fast. So I’m afraid you will have to rely solely on my commentary about Thomas and the Magic Railroad. In all honesty, I think Nalyce made the right call by opting out of this movie. Not only is she likely no longer in the age bracket for this type of film; the plot is so all over the place that I had trouble following it. While the film does have some familiar faces that include Alec Baldwin and Peter Fonda, there is nothing about the story that really reaches out and grabs you. The location changes so much that after a while I started to feel like a ping pong ball being knocked back and forward. Also, given that the film is a re-release (having originally been released in theaters in 2000), the low quality of the special effects are not likely to captivate a younger audience that has been spoiled with the high-definition quality that they get today. In a nutshell, this is one is probably not worth your time.

When it comes to the story, I think this was a case of too many cooks in the kitchen. Between the storyline involving the conductors and their dwindling gold dust, the budding friendship between Lily and Patch, and the mystery of the Lady the lost engine, there isn’t enough runtime to adequately develop any of these storylines. While the plots are supposed to be interconnected, the constant shifting between these plots and subplots gives the film a choppy feel. That’s not even fully addressing the film’s namesake’s contributions. In this regard, it seems as though Thomas is more of a secondary character, with the focus seeming on the film’s live-action characters. I also disappointed to say that despite having veteran actors, their performances were one-dimensional at best. Alec Baldwin’s Mr. Conductor was a lifeless performance, while the more upbeat Mr. C. Junior (Michael E. Rodgers), which I imagine was meant to add comedic relief, does little to move the needle either.

The most interesting storyline involves Diesel 10’s efforts to find Lady and destroy her. Even so, Diesel 10’s machinations to accomplish this are resonate of Wile E Coyote’s efforts to catch the Roadrunner, but less entertaining. This character too is all over the place; one minute he is targeting Mr. Conductor, then he’s after Thomas. To be fair, these efforts are a means to an end to find his ultimate target. In my opinion, the film would have done better to focus more on the search for the lost engine rather than jumping around. It’s not guaranteed that it would have dramatically improved the film, but it would have made it easier to follow. There was just too much focus on the live-action themes when the primary focus should have been the mystery of lost engine and the magic railroad. The diminishing gold dust subplot could have been cut in favor of the aforementioned storyline, because for me it added no real substance to the overall story.

I know that this must feel like a complete condemnation of the film, and if I’m being honest, this is not a film that I am recommending; I will say that the Thomas the Train series has never been something that I was ever interested in. I don’t even remember if I watched it as a child. Perhaps there are some Easter eggs that as a non-fan I am not privy to. Even so, I’d be remiss if I didn’t say that I don’t believe this was a film that needed to be re-released. I have a difficult time believing that it’s going to find much of a home with a younger audience that has been treated to the best of the high-definition era. Perhaps there is potential for it to find a niche with nostalgic fans; who knows. Long story short, it wasn’t the film for me.

Jeremy Butler is a film school graduate of the International Academy of Design and Technology. He is been writing for Upcomingdiscs since 2012; however, movies have played a big part of his life for much longer. Favorite genres include horror, science fiction/fantasy, and comedy. Favorite movies are V for Vendetta, Boondocks Saints, Kiss Kiss Bang Bang, and The Godfather.
Holiday Gift Guide Spotlight: Sony Pictures Presents – Resident Evil Complete Film Series On UHD Blu-ray In 4K Holiday Gift Guide Spotlight: CBS Presents Hawaii Five-O (2010): The Complete Series