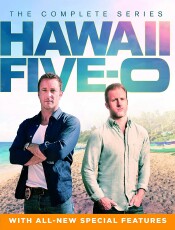 I think I see your problem. You have this list. It’s a list of people you need/want to buy a Christmas gift for. The trouble is that they’re into home theatre, and you don’t know Star Trek from Star Wars. You couldn’t tell a Wolf Man from a Wolverine. And you always thought that Paranormal Activity was something too kinky to talk about. Fortunately, Upcomingdiscs has come to the rescue every Christmas with our Gift Guide Spotlights. Keep checking back to see more recommendations for your holiday shopping. These gift guides ARE NOT paid advertisements. We take no money to publish them. With conditions as they are, shopping won’t be easy this season. The nice thing about discs is that they’re so easy to get from places like Amazon that you can give a great gift and stay perfectly safe while you do it. Hawaii Five-O has left the airwaves after a ten-year revival series. It’s a huge box of DVD’s that will look sweet under someone’s tree.

“It’s crazy the things that happen at work.”

The beginning of 2020 certainly created some crazy things everywhere in the world. A pandemic arrived and shut down productions all over the globe. Films are missing long-anticipated release dates, and most network television shows were forced to close down early to protect their casts and crews. Seasons have been called with whatever episodes were already finished. Most of those shows will continue to shoot those episodes as part of their next season when they are finally able to get back to work. That won’t be the case for Hawaii Five-O. Late in this 10th season it was decided the show would wrap it up for good.  We got 22 episodes, and they even managed to get out a series finale. If it all feels a little rushed, that’s because it was. This wasn’t the best year to have to say goodbye, and it certainly adds to the sadness for the show’s participants and fans. Now CBS is offering those final episodes before we all say aloha.

For those who have been living under a rock since the 1960’s, I’ll give you a quick rundown on what this series is about. The governor of Hawaii created a special task force that operates around the regular police department. They handle the tough cases and are given “means and immunity” from bending the law a bit in order to take on the tougher cases. The team is headed up by a former Navy Seal whose father also served in law enforcement. He’s Steve McGarrett, originally played by Jack Lord, and here played by Alex O’Loughlin. His partner is an ex-New Jersey detective named Danny Williams, another original character played once by James MacArthur and now played by Scott Caan. If you recognize the last name, that’s because he’s the son of Sonny Corleone, James Caan. If the name doesn’t give you any hints, his speech patterns are a dead giveaway. The character is also the source of the show’s famous line: “Book ’em, Danno”. The two pretty much act like a bitter married couple, and their interactions are one of the strengths of the series. They love each other but constantly argue. The chemistry between these two is priceless and alone worth the price of any season collection. Last season, however, Caan had taken a step back on the show to spend more time with his real family. He doesn’t get near as much screen time this season once again.

Steve and Danny don’t do all of this alone. Over the years new cast members have been added along the way. Chi McBride is Lou Grover. He used to be a police captain in Chicago before his family got threatened because Grover exposed some bad cops. McBride is a big guy and can be quite intimidating, but he’s a huge teddy bear inside. Fans of the old Boston Public will fondly remember him as the school’s principal. Jerry Ortega is played by Lost’s Jorge Garcia. He started the show for a few years as a recurring character who got the team mixed up in his conspiracy plots. He’s the island’s version of the Lone Gunmen of X-Files fame. He’s now the team tech and expert on lore and history. Ian Anthony Dale plays ex-mob family heir Adam Noshimuri. Adam married Kono, but of course, with her being gone, they’ve split the characters, and Adam is invited to join the team. He has contacts in the mob world on the island because his father was one of the bosses. He’s been trying to get out from under his family tradition, and now he’s on the team.

Two of the newest members of the team joined a couple of years ago when the cast controversy cost the show two of its leads. Beulah Koale is Junior Reigns. He was a Navy Seal who had lost direction in his life until Steve reached out to give him purpose on the team. He’s the young, optimistic guy and somewhat of a puppy dog. For a Seal he can be quite naive.  Meaghan Rath is the sister of Supergirl’s brainiac Jesse Rath, and plays Tani Rey. She’s also a tough cookie looking for direction and had Steve reach out to her. These two new characters are partnered, and they have found some terrifically easy chemistry. They’ve become another duo that keeps the show interesting and fresh.

The team has some folks outside of the group who usually play a part in the stories. Taylor Wiley was a UFC wrestler now turned actor. He plays Kamekona, an island business whiz who runs a shrimp company where the team likes to eat. He’s the team’s number one informant. He used to be a thug and has a lot of connections in the underworld. Kimee Balmilero is the medical examiner, Dr. Noelani.  Finally, you have Dennis Chun as police Sgt. Duke Lukela. He’s the team’s main contact within the local police department.

The final season gives us the last new regular to join the task force. Steve and the team encounter Quinn Liu (pronounced Lou), played by Katrina Law, while on the trail of some bad guys in the season premier. She’s a military MP who has taken it upon herself to chase the same bad guys and ends up making a lasting impression on Steve. Law spent many episodes playing Nyssa, the daughter of super bad guy Ra’s al Ghul in the DC television Arrowverse.

For its first seven years there have been few departures on the refreshed version of Hawaii Five-O. What we have seen instead is additions to the cast pretty much on an annual basis. The result has been a fairly large ensemble that wasn’t there for the start. But Season 8 sees the largest departure to the series since its inception. It started out with Daniel Dae Kim wanting the same pay as the show’s two leads, Scott Caan and Alex Loughlin. That wasn’t going to happen, and before long Kim started to accuse the show runners of being racist because of the difference in pay. Now keep in mind that every series has a lead or leads who get more money than the rest of the cast. Unfortunately, this attempt at a raise brought in racial accusations. That brought Grace Park into the fray to defend Kim. The end result is that both walked and appear to have seen their last days on the show. So this is certainly a milestone year for the series, and I promise you that it didn’t miss a beat.

We’re talking over 240 episodes on 65 discs. I say over 240 episodes because extras include classic episodes from the original series that were either remade here or connected to some of these episodes. All of the extras from each season are also included which means features, deleted scenes, gag reels, and more. There’s an extra disc not included in any of the season sets that includes a retrospective and reunion of the cast. Look, not many of us are going to be taking a trip to Hawaii anytime soon. This is the next best thing for that television addict on your list.

Some have gone well … others not so much, but Hawaii Five-O was the best of them, and I can promise you this: “You’re going to miss this thing.”

Gino Sassani is a member of the Southeastern Film Critic's Association (SEFCA). He is a film and television critic based in Tampa, Florida. He's also the Senior Editor here at Upcomingdiscs. Gino started reviewing films in the early 1990's as a segment of his local television show Focus. He's an award-winning recording artist for Omega Records. Gino is currently working on his 8th album Merchants & Mercenaries. Gino took over Upcomingdiscs Dec 1, 2008. He works out of a home theater he calls The Reel World. Favorite films: The Godfather, The Godfather Part II, The Body Snatcher (Val Lewton film with Karloff and Lugosi, not the pod people film), Unforgiven, Gladiator, The Lion King, Jaws, Son Of Frankenstein, The Good, The Bad And The Ugly, and Monsters, Inc.
Thomas and the Magic Railroad (20th Anniversary Edition) Collateral (UHD Blu-ray) (4K)