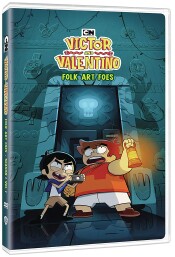 Cute show, at least as far as I was concerned. My daughter is a bit of a different animal; then, of course, if it doesn’t show on Netflix or YouTube, she tends not to be all that interested. Unfortunately for my daughter, Victor & Valentino is a Cartoon Network show, so her interest in the series was nonexistent in the beginning. On the plus side, she was coming off a long punishment that included the loss of her TV privileges, so given an opportunity to watch any form of entertainment, she jumped at the chance. As I said, she wasn’t really about the show at first, but over the course of the 18 episodes, I think she started to enjoy it. Don’t let that number scare you. Each episode tends to run between 11 and 12 minutes, so you can watch the entire thing in the same span that it would take to watch a movie and a half. More on the subject: the series follows two half-brothers who are polar opposites; Victor “Vic” Calavera (who is voiced by show creator Diego Molano), an easily bored, hyperactive kid with a penchant for mischief and disregarding rules. This is perfectly displayed in the series opening episode when he ignores a warning from his grandmother not to play with an artifact due to it being the prison for a trickster spirit, but more on that in a second. Then there is Valentino or Val, Vic’s older, more cautious half-brother. His time is usually spent watching after his brother and trying to undo whatever mischief his brother has gotten them into. And believe me, there is a lot of mischief.

So our introduction into the series (the title of which is where this disc derives the Folk Art Foes name) includes the aforementioned trickster spirit. In a nutshell, Vic disregards his grandmother’s warning and unintentionally frees the trickster, which immediately begins to wreak havoc in their quiet town of Monte Macabre. At first, Vic finds the spirit’s antics entertaining until he begins to notice the trickster’s total disregard if his pranks hurt anyone whether it be physically or emotionally. It is at this point that the significance of the show becomes clear; each episode is a vehicle for delivering an important moral or life lesson. For me, this aspect of the show was what made the series worth watching.

Granted when it becomes clear that a cartoon is trying to educate my child in some fashion, she normally runs in the opposite direction. Fortunately, the overall moral comes wrapped in the candy coating of everyday topics that she herself has dealt with, such as the “Legend of the Hidden Skate Park” episodes that highlights the importance of rules, that their purpose isn’t to ruin your fun but to keep you safe. This was also a personal favorite of mine, because it was definitely easy to relate to. We have all been there, we have all wanted to make up our own rules or live with no rules. It’s only when you see the danger of someone manipulating the rules to their benefit that you understand the importance of a responsible adult making the rules.

There are a lot of lessons taught in these 18 episodes with all different themes that include the importance of honesty, playing fair, not stealing, and listening. Essentially everything that I as parent try to impart to my daughter with varying degrees of success. Some lessons are easier to learn than others, so as a parent, I appreciate a show that helps to reinforce those lessons to my child. Granted, it can get a bit tedious after 18 straight episodes, so if you plan on using this as an educational aid, I recommend introduce it to your child in small doses. Basically use whatever episode applies to the wisdom you are attempting to impart. Don’t worry; the morals are easy to see whether you are a parent or a child. In fact, that was something Nalyce and I did at the conclusion of each episode, a brief discussion as to what was the significance of the episode. It’s effective and helped to alleviate some of the tediousness, for us at least.

In regards to what episode stuck with us the most, it was different for us both. For Nalyce, her favorite was the “Fistfull of Balloons” which covered Vic’s pursuit of revenge after a perceived betrayal. Yeah, my kid tends to believe in revenge, so it doesn’t surprise me that resonated with an episode that was all about the subject. I will say without giving too much away, I think she got something out of that episode. For me, it was definitely “Welcome to the Underworld,” which actually turned it to be a double episode. For me, this episode highlighted the importance of accepting yourself flaws and all and turning a perceived weakness into a strength.

All in all, I think Diego Molano created a quality product that is worth watching. I believe Nalyce got something out of it too. She may have started watching merely so she can have some form of entertainment, but by the end, I dare say that she was actually entertained. And what more can you ask for?

Jeremy Butler is a film school graduate of the International Academy of Design and Technology. He is been writing for Upcomingdiscs since 2012; however, movies have played a big part of his life for much longer. Favorite genres include horror, science fiction/fantasy, and comedy. Favorite movies are V for Vendetta, Boondocks Saints, Kiss Kiss Bang Bang, and The Godfather.
Wonder Woman 1984 (UHD Blu-ray) (4K) Lynyrd Skynyrd: Live At Knebworth 1976 (Blu-ray)