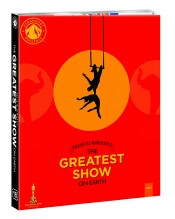 “We bring you the circus, pied piper whose magic tunes greet children of all ages, from six to 60, into a tinsel and spun-candy world of reckless beauty and mounting laughter and whirling thrills; of rhythm, excitement and grace; of blaring and daring and dance; of high-stepping horses and high-flying stars. But behind all this, the circus is a massive machine whose very life depends on discipline and motion and speed. A mechanized army on wheels that rolls over any obstacle in its path, that meets calamity again and again, but always comes up smiling. A place where disaster and tragedy stalk the big top, haunt the back yard, and ride the circus train. Where death is constantly watching for one frayed rope, one weak link, or one trace of fear. A fierce, primitive fighting force that smashes relentlessly forward against impossible odds. That is the circus. And this is the story of the biggest of the big tops, and of the men and women who fight to make it The Greatest Show on Earth.”

It was 1952 and four years before Cecil B. DeMille would deliver his Biblical epic release of The Ten Commandments. He would team with Charlton Heston for a bit of a dry run first in a film called The Greatest Show On Earth. It was released with the kind of fanfare that often precedes the arrival of the circus to town each year with its popcorn and elephants, clowns and lions and high flying trapeze artists. And while the circus is gone now, many of you are old enough to remember what a thrill it was to watch each time the big top opened up in our towns. For me it was Reading, Pennsylvania and the Rajah Theatre. Cecil B. DeMille was quite aware of the appeal of those usually annual visits. And so was born The Greatest Show On Earth.

As the film begins, we find the circus in its winter headquarters down the highway from us here at Upcomingdiscs, in Sarasota, Florida. The cast and crew of the circus are hearing that the show will be truncated in the coming season by shortening to ten weeks and only playing the big towns. That’s less money for the performers and support staff. They turn to the show’s ramrod, Brad Braden (Heston) who was named for the location’s neighboring town of Bradenton, Florida. Brad is determined to convince the bean counters to keep the usual season. When his pitch about disappointing all those kids (of all ages) out there falls flat, he reveals his trump card. He’s signed the circus sensation The Great Sebastian (Wilde) to join the show, but he only works if there’s a full season. A deal is made that they will remain out on the road as long as they remain in the black. It’s a done deal, and everyone’s happy, right? Not so fast. In order to have Sebastian, he had to give him the center ring. Remember there are three rings in the big shows. Unfortunately, he had already promised that position to his love interest, Holly (Hutton). And so he’s in a little hot water with his girl, and that’s really going to become one of the main story arcs here. You have to understand that this isn’t a story played to the backdrop of the circus. It’s a circus playing to the backup of a few story threads.

Most of the 152 minutes of running time is devoted to the actual circus acts. We get scenes of 20 minutes or more each which basically film the actual circus routines from parades to individual acts. The entire set is the actual Ringling Brothers and Barnum & Bailey show with the actual performers doing their acts for the film. The prominent roles were of course given to a rather surprisingly hefty cast for a film that doesn’t feature its cast as dominantly.

Charlton Heston gives us the same kind of leading man you get in other classics like The Ten Commandments and Planet Of The Apes. He barks out orders and advice with authority, and that takes center ring when he’s on the screen. His girl Friday, Holly, is played by Betty Hutton, who would go on to have her own television series in 1960 called The Betty Hutton Show. There’s a bit of a triangle here that involves Sebastian, a well-known ladies’ man who has had history with one of the girls in the troupe. Sebastian is played by Cornel Wilde, who had to learn many of his trapeze moves. Stunt doubles were only used in long shots. Both Burt Lancaster and Kirk Douglas were considered for the role because both actually were trapeze artists and both would go on to star in films featuring that skill later in their careers. Holly falls for Sebastian, and it looks like they are an item until Sebastian falls and is nearly killed. The two characters pushed each other in a contest of nerves, much to the irritation of Brad. While Holly is pursuing Sebastian, Angel takes advantage of the moment to try to seduce Brad for herself. Angel was played by Gloria Grahame, but only after Lucille Ball got pregnant and had to bow out of the role. The main circus clown is Buttons, and he’s played by Jimmy Stewart. Stewart never appears out of clown face, because he’s been running from the law for killing his wife. But he’s a doctor who ends up doing “the right thing” and saving a life. He’s the guy in the circus everyone loves, and Stewart ends up with that folksy, loveable guy even under tons of makeup. Rounding out the cast is Dorothy Lamour as the show’s veteran, Phyllis. There’s a truly wonderful moment, but if you blink, you’ll miss it. While she’s singing a number the camera pans, as it often does, to the audience, where you’ll see Bob Hope and Bing Crosby munching on popcorn. The two stared with Lamour on many of the trio’s films. (Road To Singapore, Road To Zanzibar, and Road To Morocco)

While the film itself hasn’t stood the test of time, there is a rather spectacular (for the time) f/x sequence that has been remembered over the decades. One of the film’s small story arcs deals with a mobster who is running crooked games, and Brad throws him out. So the mobsters gets even by attempting to rob the cash car, but his actions result in a massive train collision and derailment. Most of the scene was shot with real train cars and not models. It remains a pretty solid f/x performance to this day. Unfortunately the high-definition image makes some of the greenscreen in other parts of the film look pretty bad. You’ll see a very obvious green aura around characters from time to time.

The film is not without its controversy. It achieved something that not even The Ten Commandments achieved. It won the Academy Award for Best Picture for 1952. That caused quite a stir. Many considered the film was merely a reproduction of a typical Ringling Brothers and Barnum & Bailey show with some prominent actors in place of some of the performers. It wasn’t the kind of thing that should earn the film industry’s top award. What made the award even more egregious to many was that it was up against the Gary Cooper and Grace Kelly classic western High Noon. It didn’t help that High Noon suffered from the McCarthy era communist blacklists. Writer Carl Foreman even admitted to his anti-McCarthy leanings and influence on the film’s script. Still today I find very few people have even heard of The Greatest Show On Earth, but High Noon remains a celebrated classic these 80 years later. But maybe that will change for this film with the release on Blu-ray. “The performance ends, but the drama never stops.”

Gino Sassani is a member of the Southeastern Film Critic's Association (SEFCA). He is a film and television critic based in Tampa, Florida. He's also the Senior Editor here at Upcomingdiscs. Gino started reviewing films in the early 1990's as a segment of his local television show Focus. He's an award-winning recording artist for Omega Records. Gino is currently working on his 8th album Merchants & Mercenaries. Gino took over Upcomingdiscs Dec 1, 2008. He works out of a home theater he calls The Reel World. Favorite films: The Godfather, The Godfather Part II, The Body Snatcher (Val Lewton film with Karloff and Lugosi, not the pod people film), Unforgiven, Gladiator, The Lion King, Jaws, Son Of Frankenstein, The Good, The Bad And The Ugly, and Monsters, Inc.
Lynyrd Skynyrd: Live At Knebworth 1976 (Blu-ray) Ancient Aliens: Season 13